Tourists tend to overlook the capital of the Liguria region in favour of Turin, Milan or Bologna when it comes to city breaks in northern Italy, just using its airport to head for the Italian riviera. But the birthplace of Christopher Columbus, St George’s Cross, foccaccia, blue jeans (the fabric was invented here by some accounts: “jeans” coming from Gênes, the French word for Genoa) and Joy Division record covers (I’ll explain that one later) is a joy in its own right.

Genoa’s long, narrow shape is dictated by its position between the sea and the Ligurian Appenines. Rarely more than a couple of kilometres wide, the city stretches along nearly 40km of coast – from the Voltri neighbourhood in the west to Nervi, a fishing village-turned-seaside resort in the east – with development snaking inland into a couple of valleys. Just east of the Porto Antico is the old city, Europe’s largest medieval town, a warren of tight caruggi (narrow streets) reminiscent of the Barrio Gótico in Barcelona or the centre of Naples. Genoa’s modern business/shopping area borders the old town, starting at the central Piazza De Ferrari. 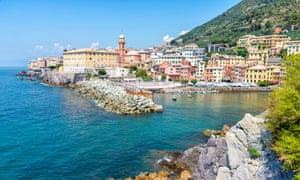 Getting around is by turns simple and novel. The old city is traversable on foot in 10 minutes (assuming you don’t get lost – tall buildings and tight streets are no friend of Google Maps) and buses, trains or taxis are the way to reach neighbourhoods along the coast. But this is a city of heights: 10 lifts and three funiculars link ground-level Genoa with upper areas – the most famous being the Spianata di Castelletto viewpoint – and tickets for them are integrated with those for buses and trains.

The topic of the collapse of the Morandi Bridge last summer, a nationally traumatising event widely seen as Italy’s Grenfell, inevitably comes up from time to time. Nobody I met wished to dwell on it, however, despite the obvious anger and grief it has caused.

I left Genoa concerned that I might have to pay for a second seat on the plane home – this is a place that gleefully confirms every Italian feeding stereotype going. My first evening was spent at Slow Fish , a huge biennial outdoor festival at the Porto Antico that promotes sustainable fishing, an increasingly hot topic in a city where fish and seafood are ubiquitous. At Osteria di Vico Palla in a nearby side street, I ate beautifully fresh and hearty seafood soup (€8) and cappon magro (€13) – an elaborate Genovese seafood and vegetable salad-cum-food-pyramid topped with a whole langoustine. 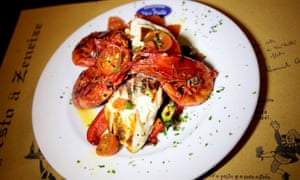 Rosmarino, close to central Piazza De Ferrari, does succulent beef tartare with local prescinsêua soft cheese (€9) and melt-in-the-mouth calamari skewers (€15), and I enjoyed exceptionally friendly service and perfectly cooked salt cod with walnut sauce (€15) at Le Rune in the newer part of town. A great and very low-cost lunch option is to grab a foccaccia (plain or topped with onions) and take it to a park or beach. The best espresso I discovered (important if you want to get anything done after lunch in Genoa) was a remarkably rich and complex brew at Tazze Pazze on a tiny square near the port. 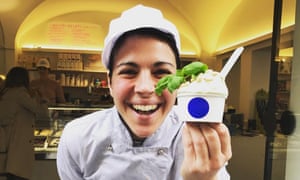 There’s top-drawer gelato at both Profumo and, round the corner on imposing via Garibaldi, Gelatina. The latter also has a laudable sense of social responsibility: owner Martina Francesconi makes a point of employing asylum-seekers and disabled people, and sources all of its ingredients ethically and as locally as possible. Her newest ice-cream flavour is basil, developed to help the herb farmers in a valley near the Morandi Bridge who have been badly hit economically by the disaster.

Genoa’s municipal museums and galleries range from the 16th-century Strada Nova palaces on Via Garibaldi, via Renaissance painting and sculpture at the Palazzo Spinola National Gallery to the GAM Galleria d’Arte Moderna. But the independent contemporary Pinksummer gallery inside the Palazzo Ducale has been a vital fixture on the Genovese scene for well over a decade. Its current Invernomuto exhibition is an atmospheric installation in which Moorish ceramic heads with red laser eyes beam geometric patterns into the darkness as ambient music bathes the room. The Edoardo Chiossone Museum of Oriental Art in Villetta Di Negro Park houses a globally renowned collection of Meiji-era Japanese and Chinese figurines, pottery, masks, tools, weapons and more. 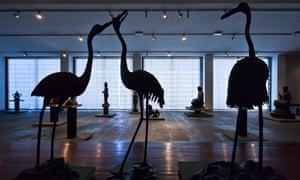 In the eastern seaside district of Nervi (best reached by train from Genova’s Brignole station), the Nervi International Festival (2-20 July) will be the second in a trio of annual summer festivals, combining ballet with classical and pop concerts in the gardens of a villa overlooking the sea: book online or at the Teatro Nazionale in Genoa. The Porto Antico is the setting for the multiculural Suq (souk) festival from 15-24 June, with theatre, music, dance, workshops and food, and open-air concerts throughout the summer.

A port city for over 1,000 years, Genoa is not short of an excellent bar or two. I hit the town with fashion designer Jacopo Pennone, who splits his time between Genoa and Shanghai. La Lepre in the old town is an unpretentious and welcoming place with a large terrace, excellent wines and beers and a fine array of dogs. Most Ligurian wine is white (red grapes don’t do so well on the region’s rocky hillsides). The closely related vermentino and pigato (the latter slightly more aromatic) are the most common varieties. I didn’t taste a bad example of either all week. 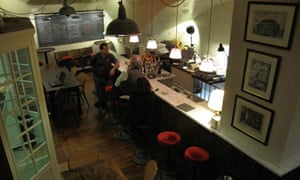 A short walk away, Cantine Matteotti is a superb wine bar with an endearingly flexible attitude to closing time. “I can give you 10 minutes,” the owner smiled as we walked at 11.30pm, then delivered the same line to another group of newcomers half an hour later. Nearby Les Rouges is a well-regarded spot for apericena (the popular aperitivo-meets buffet dinner format). I washed down squid salad with potatoes and olives and great hunks of foccaccia with anchovies, with the house aperitif. Les Rouges’ grand setting inside one of Unesco-protected Rolli palaces presses home the fact that visitors can enjoy magnificent baroque interiors in Genoa’s bars and cafes as easily as in its many spectacular churches.

Around the corner from my B&B, Casa Ramé, Spazio Lomellini is a cosy, charmingly decorated 90-capacity music and arts venue that has become a prime stop-off for smaller international musicians and bands as well as local acts. The place doubles as owner Ruben Esposito’s sculpture studio, and he runs the venue on a membership basis, though anyone can become a member on the door for €10. 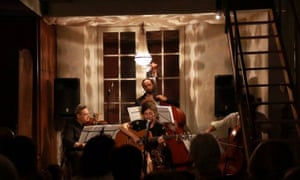 Genoa is not renowned as a clubbing city but the seafront area of Corso Italia has several venues, and if karaoke is less of a source of primal fear for you than it is for me, the much-loved My Way on Piazza Tommaseo (no website) is the place to go.

Some of Genoa’s most notable shops are also historic must-visits in their own right. Via Garibaldi 12 is an interior-design store that, as its manager Lorenzo Bagnara explained, is deliberately set out to retain the atmosphere and character of its previous incarnation as a grand old baroque home. Bagnara is one of 103 officially recognised “ambassadors for Genoa” and a source of passion and insights on the city.

He tells me the city has retained much of its medieval heart because the 19th-century bourgeoisie preferred to live in new buildings in the Castelletto and Foce areas, leaving the old town relatively undisturbed. 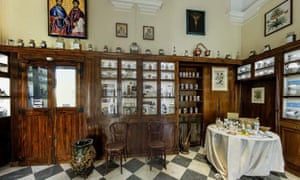 Up another elevator is Antica Farmacia S. Anna, a pharmacy attached to a monastery that has been open since 1650. This isn’t the place to come for a box of Nurofen: Frate Ezio, who runs both pharmacy and monastery, concentrates on the kind of remedies monks have dealt in for centuries. Antique cabinets of herbs and potions line the walls, and above the counter a cherub holds a sign reading, in Latin: “We can give you medicine, but only God can give you health.” Another marvellous step back in time awaits at Romeo Viganotti, whose exquisite chocolates – crisp pralines and velvety truffles – are still made on belt-driven machines installed in the 1860s. 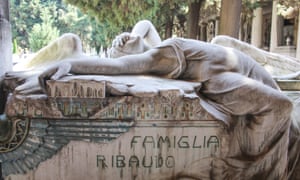 On my final day I met with author and journalist Rosa Matteucci to visit a few of her favourite spots. First we took a bus inland to Staglieno and its extensive cemetery, a testament to 19th-century one-upmanship, and home to not one but two tombs featured on the covers of Joy Division records. “This place is like a work of art that goes all the way from baroque to futurist,” Mateucci said as we made our way towards the grieving angel forever associated with Love Will Tear Us Apart.

Photographs snapped (there’s a stepladder to help visitors capture the correct angle), we wandered among hundreds of similarly ostentatious monuments to the dead. Also on our list was a ride on the most interesting of the city’s elevators, the Ascensore Castello d’Albertis-Montegalletto. Unique in Europe, this incredible contraption starts as a train and ends as a lift, all in the same journey. This video explains the engineering behind this most memorable public-transport experience.

As sunset approached there was still time to tackle what was, perhaps surprisingly, my first serious self-propelled climb in Genoa: a short but vigorous ascent to Villetta Di Negro, a hilltop park adjacent to the old town with a road tunnel underneath. My reward was the park’s otherwise deserted, wooded viewpoint, and one last glorious vista over the caruggi of the old town and the sparkling sea beyond, the gurgling of a small waterfall audible over the distant hum of the city below.

• The trip was provided by Visit Genoa. Flights were provided by British Airways, which has returns from Gatwick from around £60. Casa Ramé has doubles from €90 B&B. Non-fly options include Eurostar to Paris, high-speed train from Paris to Turin, then regional train from Turin to Genoa (depart London 9.22am, and arrive Genoa 11.30pm

Would You Spend $600 to Stay at a Hotel Run by a Fitness Center? Equinox Is Betting Yes.

See the darker side of the Goldfields ·