Five short days after its October 31 grand re-opening, KAOS Dayclub and Nightclub at the Palms Casino Resort in Las Vegas has closed its doors forever.

“While Palms has experienced exceptional growth across both the gaming and non-gaming segments of the business, the expense side of the business has been challenging to date, due in large part to the entertainment and fixed cost structure associated with KAOS,” Britt explained. “Therefore, we have decided to take some time to reassess the programming and use of those venues going forward. In the interim, we intend to use the venues for private meeting space and special events, in addition to everyday resort pool operations.” 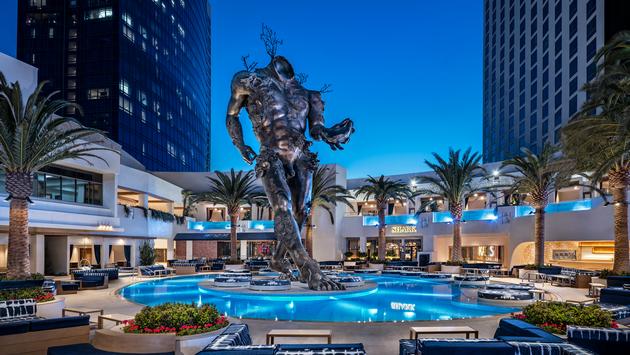 Bloomberg reported that the Palms will be taking a hit of over $28 million related to the club’s closing, along with additional losses of between $16 million and $22 million projected over the next two quarters.

Chief Executive Officer Frank Fertitta cited the extreme competitiveness of Las Vegas’ nightclub market, known for its superstar DJs, outlandish cabanas and pricey VIP bottle service, as part of the problem during a call with investors, said Bloomberg. Fertitta told participants on Tuesday’s call, “It doesn’t appear that the market has grown enough for the amount of supply…The cost of entertainment is excessively high and we just made the decision to focus where the fish are.”

The highly-anticipated KAOS had been part of the Palms’ $690-million renovation of the Palms, initiated after the Fertitta brothers purchased the property three years ago, and opened in April with a massive celebration and performances from big-name artists like Cardi B, Travis Scott, J Balvin and G-Eazy. Cardi B. The vibrant day-to-night scene thereafter boasted exclusive residencies by such chart-topping artists as Cardi B, Deadmau5, Shrillex and Marshmello.

Yet, after about six months in operation, KAOS began facing difficulties, including the cancellation of Marshmello’s $60-million residency contract and the resignation of the Palms’ Vice President and General Manager, Jon Gray, followed by the departure of several other company executives, according to Eater online.

The over 100,000-square-foot, indoor-outdoor venue had consisted of a 73,000-square-foot day club, featuring and 29,000-square-foot nightclub, which included a rotating DJ booth and entertainment stage. It closed on September 15 to undergo construction of a new outdoor dome, which shelters the pools and outdoor performance space and reopened on Halloween with a follow-up performance by Cardi B.

The vast swimming pool spaces, complete with the new dome, will continue to serve Palms Casino Resort guests, even as the adjacent KAOS disappears.

‘It would destroy it’: new international airport for Machu Picchu sparks outrage

Are the Cook Islands the most beautiful islands in the world?