Home » Family holidays » A bike tour of the real Barbados

I’m going for a ride with Randy Licorish. We’ve put the bikes in a pickup truck and are heading through the traffic south of Bridgetown. I have to admit that all I’ve seen since arriving in Barbados the night before are endless low-rise buildings, plus a lot of traffic squeezing down narrow, twisting lanes that were never intended for such vehicles.

To put it mildly, my expectations are low. If Barbados-lover Simon Cowell were to walk past in beach shorts, I’d steal a boat and sail to the Grenadines. I reckon Randy has about six hours to save the island, a mission he seems recklessly confident about. We park and get on the bikes, soon pedalling out on to a beach.

“Morningtime, brother,” says Randy to a man who is carrying a pair of homemade beach-tennis bats and a small black ball. In the water, a raft of women in swimming caps drift past, chatting animatedly. “They put in up the coast every morning and drift with the tide,” says Randy. The man with the bats has met some friends and they’re now smacking the ball back and forth. 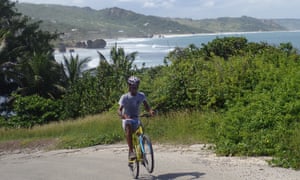 “This is Miami Beach, which is like a local hangout place, not so many tourists,” says Randy. “What you got here is our own Barbados sports, like beach tennis.”

The small group of players are now striking the ball with real venom. “We also got road tennis,” says Randy. “People just mark a court in the street and everyone comes to watch. The rule is: you gotta make all the equipment yourself. My dad likes the road tennis a lot.”

“What about the traffic?”

“They gonna wait, or go around.”

I think back to yesterday’s traffic jams. Maybe that’s the explanation.

My eye is drawn back to the drifting women. A turtle has popped up among them. Randy chuckles at my excitement. “We got plenty of turtles on this bit of coast.” 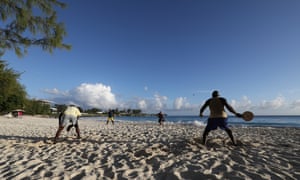 He’s right. As we weave along the south coast we spot dozens of them, popping their heads up to take a look before descending again to graze on the sea grass. The coast is a series of low bluffs interspersed with beaches, our route a mix of footpaths, gravel trails and road. On the map, the island looks like a big tooth defiantly stuck on the low jaw that is the outer reaches of the Lesser Antilles, snarling at the Atlantic. The east coast is wilder, the west calmer, as is the south, which mainly angles slightly to the milder Caribbean.

On one deserted beach, Long Bay, we sit on a rock with a view. “This is my favourite place,” says Randy. I ask if cycling is popular. “We’re seeing a big explosion in interest. People mostly go early, before work.” 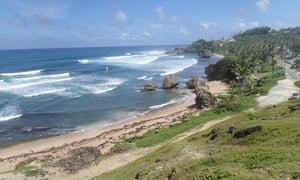 We circle back to Miami Beach and head for an hour or so up to a high point near the east coast. St John’s is a beautiful old stone church surrounded by mahogany and frangipani trees. There are graves here that date back to when the church was built in 1645. At that time there were 30,000 English settlers and 800 Africans on the island, but the arrival of sugar cane changed everything.

Within 40 years, 50,000 African slaves outnumbered the English three to one. The landscape of the island was radically altered, too: forests were felled to make way for sugar plantations, and now the only remnants of the once-magnificent forests are on the east coast. Many of those early planters were buried here, among them Ferdinando Paleologus, a descendant of the last Byzantine emperor, Constantine XI. 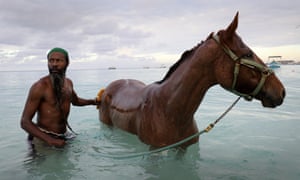 We cycle down to the Atlantic coast, heading for Bathsheba, a beach dotted with wave-sculpted rocks and wooden houses surrounded by emerald green lawns. Lunch is in a canteen that serves Bajan favourites: macaroni pie and sweet potato pie, with carrot and ginger juice to drink.

I’m hoping we will now hit the hammocks but Randy has other ideas. We set off up the coast through a series of short lung-busting hills, catching views of surfers tackling immense waves. 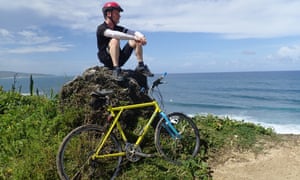 At Cattlewash, a mile or two north we turn around and head back to Bathsheba and the Sea Side Bar, a locals’ hangout that does attract a few outsiders. While downing a well-earned Banks beer, I spot on the noticeboard a snap of a familiar face taken on these steps: it’s a youthful Mick Jagger, a reminder of the island’s long reputation for attracting wealthy renegades.

One of the originals in that department was Stede Bonnet, an 18th-century sugar planter who suffered a midlife crisis and, as Harley Davidsons had yet to be invented, became a pirate instead. In the laid-back, friendly Bajan way, however, he actually paid for his first ship, an unforgivable piratical faux pas that might have led to his nickname, The Gentleman Pirate. 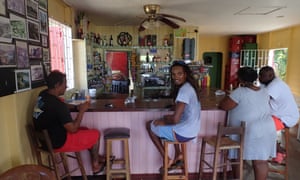 Such snippets of history, long past and more recent, wash around me at the bar. Randy has had his six hours now and I confess Barbados has won me over. It is extremely built-up in parts, and the traffic is ridiculous but the beaches are good and there is enough scenery to satisfy my demands. Most of all, the people are friendly, cheerful and entertaining. I lean my elbow on the bar, order another round, and listen to the gentle melody of Bajan conversation. Even if Simon Cowell comes in, I tell myself, I am not leaving.

• The trip was provided by Tropical Sky, which offers a seven-night stay at the Island Inn Boutique Hotel from £1,139pp all-inclusive, including return flights from Gatwick, Heathrow or Manchester. Randy Licorish’s Bike Caribbean offers cycle tours from $65 (full day $150) and bike hire from $20 a day

Recognize and develop your most valuable tool: Travel Weekly