Home » Family holidays » 10 of the best things to do in Palm Springs, California

In the early 1920s, Hollywood stars adopted Palm Springs as a place to escape the travails of Tinseltown. They were wowed by the fine weather, laid-back vibe and views of the San Jacinto and Santa Rosa mountains – plus it was close enough to comply with the “two-hour rule” stipulating actors under contract had to be on call if needed by the studio. The Oasis Hotel, built in 1924-5 and designed by Lloyd Wright (son of Frank), led the way with its modernist design. More resorts, such as El Mirador, followed. Celebrities decided homes were more important than hotels, though, and along with now-revered architects – including Donald Wexler and Richard Neutra – concocted bold exteriors and sumptuous interiors. The MidMod Design Tour ($100pp) is a new architecture trip with designer Lyle Boatman that uses digital tablets to contextualise the tour. Palm Springs Mod Squad (from $70pp) offers an interiors tour, while Palm Springs Historical Society organises walking tours (from $20pp). Tours take in properties owned by Frank Sinatra, Elvis, Elizabeth Taylor, Clark Gable, Carole Lombard, Cher, Sammy Davis Jr and Leonardo DiCaprio. Rent a bicycle (Bike Palm Springs, from $23), pick up a guide at Palm Springs’ Visitor Center and visit at your own pace. 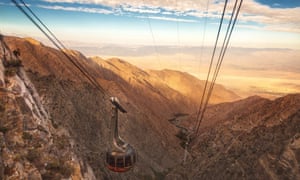 Palm Springs isn’t a solitary oasis. Nine cities make up the Greater Palm Springs area: Palm Springs, Desert Hot Springs, Cathedral City, Rancho Mirage, Palm Desert, Indian Wells (famed for its tennis tournament), La Quinta, Indio and Coachella, with around 30 (easy-driving) miles separating the first from the last. Gaze at them all in the dramatic desert setting of the Coachella valley from the Palm Springs Aerial Tramway. The tramcars rotate as they ascend 1½ miles through the Chino Canyon, arriving at the mountain station and cafes that are the starting point for exploring the Mount San Jacinto state park and its 50 miles of hiking trails.
• Adults $25.95, children (3-10) $16.95, 1 Tram Way Palm Springs, pstramway.com 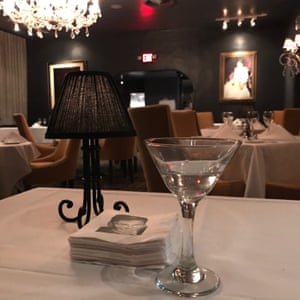 Amid the new hotels changing the look of downtown (such as The Rowan with its rooftop pool), fabled properties still thrive. Built in 1925, the Ingleside Inn became a Palm Springs institution through the ownership of Ruth Hardy (who ran it as a personal club) and its underground tunnels, which helped her dodge US prohibition laws. After years of neglect, Mel Haber bought it in 1975 and also opened its restaurant, Melvyn’s. The restaurant, with its tableside dining and Sunday afternoon jazz, became the place for celebrities to hang out. Sinatra was a fan, calling in advance to advise his entourage was en route. Naturally, he had a regular table: at the back, near the kitchen. Grab food or a cocktail and soak up the atmosphere, but know this: the martini packs a punch as hard as an enraged Rat Packer spotting paparazzi.
• Melyvn’s restaurant prix fixe lunch $20, prix fixe dinner $42, doubles from $171, inglesideinn.com 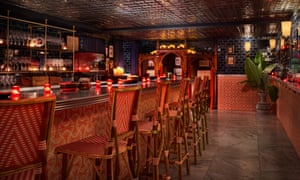 Calm those credit-card fears, you’re not staying here … So stroll past the Instagrammers taking selfies in front of the hotel’s swish Arabesque exterior and the “Drugs” sign in its lobby and make for the speakeasy-style Counter Reformation bar. Select from a menu of fine wines (3oz glass, $7) and small plates (from $10) such as avocado, haloumi and rye tartine with shaved iberico (or chorizo) and baked burrata with tumeric-raisin bread. If over-indulgence causes guilt, don’t worry, the bar has a confession booth. The hotel was once owned by cowboy-movie star Gene Autry and in the 1960s was used as a training residence for the baseball team he owned, the California Angles.
• 4200 East Palm Canyon Drive, parkerpalmsprings.com

Cycle on the San Andreas Fault 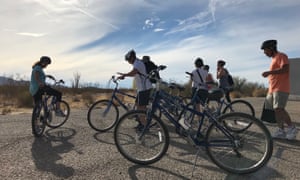 A parking lotin Palm Desert is an unassuming start for this 20-mile cycle adventure, which involves riding along a section of the San Andreas Fault. However, the support vehicle (and its trailer of bicycles) ascends nearly 500 metres before riders are prepped for the all-downhill ride. As the Big Wheel Tours’ publicity says: “There are no crossroads, no turns, and very little traffic.” But there are the jagged strata and palo verde trees of Box Canyon and views of the Salton Sea. Riders also pass the desert training centre set up by General Patton to train US troops in the second world war. The support vehicle dawdles behind as you cycle and there’s time to savour the sights and smells of the grape country near the town of Mecca.
• Big Wheel Tours’ Earthquake Canyon Express Bicycle Tour (4-5 hours, including refreshment) $105pp

An early morning Hike to the Cross, Palm Desert 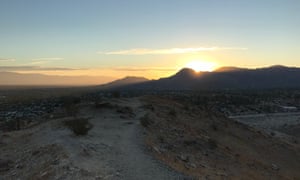 It’s worth a pre-dawn start to see the eerie/beautiful sight of the cross at the top of his walking trail illuminated amid a desert setting. The hike is a three-mile loop, rising to 195 metres, and though it has rough and steep patches it is not a taxing one: you’ll meet joggers, hikers, dog-walkers and sightseers. The views from the top – of the Santa Rosa Mountains, the cities of Palm Desert and Indio and, in the distance, Joshua Tree national park – are worth the effort. It’s just as entrancing towards sunset.
• Park and start at the trailhead at Ralph Adams/Cap Homme Park, Palm Desert

Shop at the ‘Rodeo Drive of the Desert’ 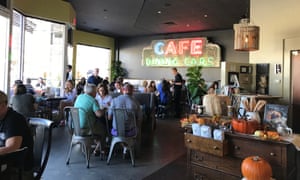 This mile-long shopping strip in Palm Desert, 25 minutes’ drive south-east of Palm Springs, gets its nickname because of the 300-plus high-end boutiques, jewellers, salons, art galleries and restaurants along its flower and statue-lined street. Gucci, Louis Vuitton and Ralph Lauren all await your browsing. It’s only a couple of miles from the Hike to the Cross, so perfect if you like contrasting effort with reward. It’s not all designer brands either: Wilma & Frieda’s Cafe is a great brunch spot that does a mind-blowing blackberry custard french toast.
• elpaseocatalogue.com; wilmafrieda.com 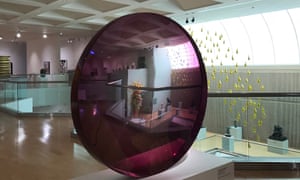 To escape the heat, head for the art, photography and glasswork at this downtown museum. As its website says: “It is always 75 degrees (23C), providing a welcome respite from the Palm Springs summer triple-digit temperatures.” It’s been in this building since 1974 but the museum was founded in 1938 as the Palm Springs Desert Museum (and focused on Native American artefacts). The airy building, with 28 galleries, has work by Chagall, Picasso, Warhol, Lichtenstein, Antony Gormley and Ansel Adams – and two sculpture gardens – for sunseekers.
• Adults $12, 18 and under free, free admission on second Sunday of every month, Sun-Tue and Fri-Sat 10am-5pm, Thurs noon-8pm, psmuseum.org 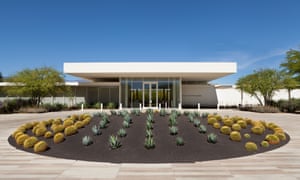 The Sunnylands estate of Walter and Leonore Annenberg – developed in the early 1960s – not only has mid-century modernist credentials but serious political connections, too. Walter was US ambassador to the UK, Leonore served as chief of protocol under President Reagan, and so many diplomatic meetings have taken place here it’s referred to as the Camp David of the West. In the charming, calming gardens of the visitor centre – with its maze, ponds, meditation classes and views of the San Jacinto mountains – there is a replica of the bench where President Obama was photographed after talks with China’s leader Xi Jinping in 2013. The gardens and visitor centre (featuring art exhibitions and a cafe) are free (Wed-Sun 8.30am-4pm, closed June to early September) and it’s possible to tour the Annenberg’s house and estate ($48, booking essential).
• sunnylands.org 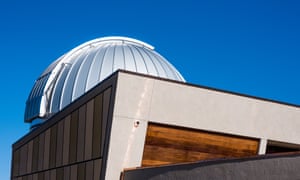 When celebrities just aren’t stellar enough, it’s time to look at the real thing. Opened in March of 2018, this observatory is adjacent to the city of Rancho Mirage’s public library. Free observatory tours are available (10am and 5pm) during the week and regular stargazing parties are organised – there’s even an outdoor stargazing deck to park on. There are frequent lectures by astronomers and scientists, including, in December, Ice Worlds: A Tour of the Solar System’s Biggest Snowballs. Rancho Mirage suffers less light pollution than the other desert cities and its skies serve up a stunning show. Alternatively, take the 70-minute drive to Joshua Tree national park and explore its observatory.
• Admission free, online registration required for stargazing parties, 71-100 Highway 111, Rancho Mirage, ranchomiragelibrary.org

Cruise: Gary Barlow set to sail on P&O cruises – how can you see the star in action?

How to escape: Why a cabin break can refresh the soul

A few years ago, I lived in a cabin for several months. It was in a glade at the bottom of a steep-sided cwm (valley) in the Black Mountains, south-east…

If you've been to a store in the past couple weeks, it's been hard to miss the (not-so-) slow creep of Valentine's Day related merchandise. Bright red boxes of chocolate,…

“It’s unique in the world. It’s the biggest city built in stone in the pre-Columbian era in South America and it’s three times older than Machu Picchu.” That’s Jose Llaja,…

Hospitality professionals will have an opportunity to explore the next generation of in-destination trends at the Middle East’s first ever edition of Arival Dubai @ ATM. The event will take…
Recent Posts
We and our partners use cookies on this site to improve our service, perform analytics, personalize advertising, measure advertising performance, and remember website preferences.Ok