Paris has not had a single central food market since Les Halles was demolished in the 1970s. But there are still flourishing historic covered markets serving neighbourhoods all over city. Apart from selling tempting cheeses, charcuterie and wines to take home, these bustling, friendly marchés also have a great choice of casual stalls to eat at, fresher and more reasonably priced than most of the surrounding restaurants. They are also a good introduction to the multi-ethnic face of Paris, with Lebanese or Portuguese specialities, Moroccan tagines or Japanese cuisine, spicy West African dishes or vegetarian burgers. 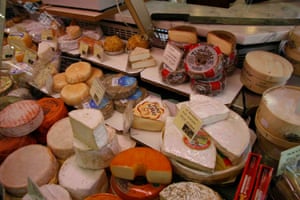 What everyone calls the Marché d’Aligre is actually a combination of three very different markets. The rue d’Aligre is a raucous morning street market, offering some of the cheapest fruit and veg in town, and includes the Boucherie Les Provinces, where Christophe Dru has transformed half of his butcher shop into a meat restaurant. Spread out over the Place d’Aligre is an anarchic flea market, while overlooking everything is the stately Beauvau covered market. The building dates from 1843 and has survived two recent fires, with renovations still going on today. It’s the perfect place to stock up on goodies to take home, from duck rillettes and game pâté to pungent époisses cheese. Sit at a table at seafood stall La Marée Beauvau to taste freshly shucked oysters (€7.50 for six), or try Fromagerie Comptoir, which has just opened a lunch counter where customers can order a selection of cheeses, try one of 150 craft beers or bring over charcuterie or smoked salmon from adjoining stalls.
• Tue-Sat 9am-1pm, 4pm-7.30pm, Sun 9am-1.30pm, Place d’Aligre, 75012 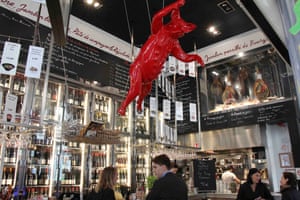 This grand stone market is actually a recent reproduction of the original 1813 building, and its 2016 reopening brought this romantic Left Bank neighbourhood to life again. While the interior is filled with fruit and vegetable stalls and a brilliant artisan cheesemonger, the outside arcades are more mall than marché, with an Apple Store, a Uniqlo, even a Marks & Spencer food hall. Fortunately, there is also L’Avant Comptoir du Marché, an irresistible wine and tapas bar created by chef Yves Camdeborde, the king of French bistronomie. A huge red plastic pig dangles over diners, over 50 wines are sold by the glass from €3, and the dozens of small plates fresh from the open kitchen range from €4-€10. The inventive combos include cod, spinach, chorizo and feta; salmon, sheep’s yogurt and cherry tomatoes; and fried pig’s ear with pickled red onion and rocket.
• Tue-Sat 8am-8pm, Sun 8am-1.30pm, 4-6 rue Lobineau, 75006 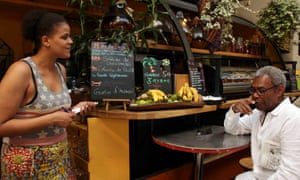 At the edge of the chic Marais quarter, the oldest covered market in Paris, originating in 1628, is easily missed from the street, hidden as it is behind two anonymous metal gates. Once inside, you enter a teeming maze of food stalls with crowds eating at noisy communal tables. Les Enfants Rouges has honestly become more food court than food market, and the dazzling choice of cuisine includes tasty Japanese bento boxes at Chez Taeko, classic French bistrot fare at L’Estaminet, and organic and vegetarian burgers at Au Coin Bio. The funkiest spot is Corossol, where a storm of Afro-Caribbean and Cajun cuisine (mains from €10) isserved to a background of zouk and reggae music. The most mouth-watering dishes are displayed at Le Traiteur Marocain, a cornucopia of couscous and tagines (from €9), pastilla and sticky cakes and sweetmeats.
• Tue-Sat 8.30am-8.30pm, Sun 8.30am-5pm, 39 rue de Bretagne, 75003 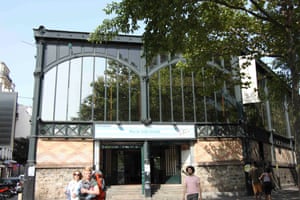 Walking distance from Gare du Nord and Gare de l’Est, this imposing covered market is built in the classic 19th-century Baltard style of red brick, wood, glass and iron girders. Right in the centre is the spit-and-sawdust Bistro Saint-Quentin, perfect for a glass of wine before deciding where to eat. This market has tables and chairs, so shoppers can pick up smoked saucisson, camembert and roquefort, a crusty loaf, some oysters and a bottle of wine, then set out a picnic. Alternatively, grab a stool at the counter of Portuguese delicatessen Chez Silvana, where the delicious plats du jour (€10-16) range from spicy stuffed calamari, to suckling pig or giant prawns flambeed in whisky.
• Tue-Sat 8am-8pm, Sun 8am-1.30pm, 85 bis Boulevard Magenta, 75010 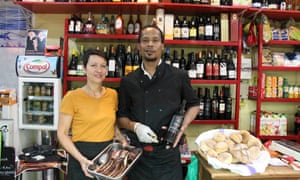 The original white stone arch still stands at the entrance of this small, cosy market built in the 1850s, when Baron Haussmann was transforming the urban landscape of Paris. A new Cambodian streetfood stall, Ama Dao, offers wok-fried vegetables and noodles, while food truck Le Réfectoire has opened a permanent counter serving juicy burgers and French-style hot dogs (from €10). It’s difficult not to be tempted by the fresh seafood displayed at Les Viviers de Noirmoutier, with its half-a-dozen tables and chairs in fake driftwood. Grab a seat and feast on a giant seafood platter of prawns, clams, crab, langoustines, whelks and winkles (from €25), or just a dozen oysters (€9), accompanied by a bottle of wine and cheeses from the fine selection at the adjacent “fromager-caviste”, Laurent Bouvet.
• Tue-Sat 9am-8pm, Sun 9am-2pm, 31 rue du Château d’Eau, 75010 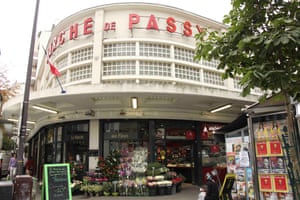 Everyone seems to know each other in this small, white-tiled 1950s market in the heart of chic, residential Paris.Among florists, butchers and organic vegetables, it boasts an outpost of one of France’s most famous cheesemongers: Androuet. The market is dominated by one stallholder, Antoine Maillard of Les Galets d’Etretat. He runs Café d’Etretat near the entrance, where locals come for their morning espresso and pain au chocolat, as well as, a little way in, Passitalia, an Italian deli with prosciutto, gorgonzola or homemade lasagne (€10) that can be eaten at its counter. At the far end of the market, Antoine also has an impressive fishmonger, with tables where shoppers can enjoy not just seafood but creative dishes of the day (€11), such as chunky sea bass steak with julienned vegetables, wrapped and steamed en papillote.
• Tue-Sat 8am-1pm, 4pm-7pm, Sun 8am-1pm, Place de Passy, 75016 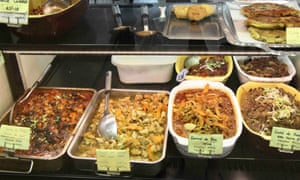 Even though the major tourist attractions of the Arc de Triomphe and Champs-Élysées are just round the corner, the tranquil Ternes neighbourhood still has its own covered market and a vibrant street market in rue Poncelet. The favourite rendezvous for coffee or lunch is the pavement terrace of the Bistrot du Marché. Just don’t expect coq au vin or boeuf bourguignon, because Chez Kim, as it is also known, has been run for the past 10 years by a Korean family. Although quiche lorraine is still on the menu, the best deal is the traditional spicy bibimbap with five Asian vegetables, rice, a fried egg and portion of squid, chicken or pork, all for €11.90 including a glass of wine.
• Tue-Sat 8am-1pm, 4pm-7.30pm, Sun 8am-1pm, 8 bis rue Lebon 75017 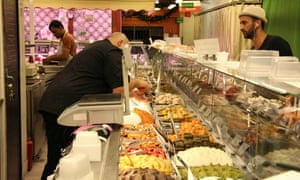 For an authentic slice of life in the untouristy 17th arrondissement, head for its lively covered market. Founded in 1846, it now occupies an anonymous 1979 building. Nonetheless, the gritty Break Bar, with great music and tables on the pavement, is anything but anonymous: it’s overseen by genial barman/cook Jeff, who serves an excellent chardonnay from Corbières for €3 a glass and rustles up thick, juicy steaks (€13) or tasty sausage and mash (€8). For more eclectic food inside the market, choose between the no-frills Japanese homecooking of Onigiriya, pizza and pasta at Basilico and, best of all, Edgar, a brilliant Lebanese delicatessen. Buy a €1 packet of five flatbreads and choose from the score of meze; tabbouleh, taramasalata, grilled aubergines, fig tapenade, falafel, kefta and succulent Turkish delight. Priced by weight, each carton costs around €4.
• Tue-Fri 8.30am-1pm, 3.30pm-8pm, Sat 8.30am-8.pm, Sun 8.30am-2pm, 96 bis rue Lemercier, 75017 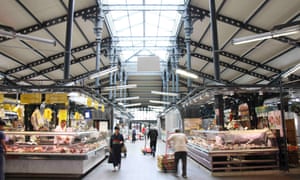 Far from the 18th arrondissement’s touristy Sacré-Coeur and Montmartre, this 1883 market is in a vibrant West African neighbourhood that is quietly becoming fashionable, with its natural wine bars and barista cafes. The cobbled streets surrounding the market, which is also known as the Marché de l’Olive, are lined with cool bars and French bistrots, while inside there’s a huge choice of ethnic eateries. Three young Franco-Thais – Danai, Anusorn and Nisarat – have just opened Bangkok Bistronomie, where a bowl of pad thai noodles or green chicken curry costs €8.60, while at Délices d’Alissa, the classic Senegalese favourites of yassa, mafe and tiep (types of stew) are priced from €7-€9. The friendly Caribbean Food stall lives up to its name with hearty €10 portions of Guinea/Guiana and French West Indies dishes like cassava or plantain gratin, or piquant fish stew.
• Tue-Fri 8am-7.30pm, Sat 9am-1pm, Sun 8am-1.30pm, 10 rue de l’Olive, 75018 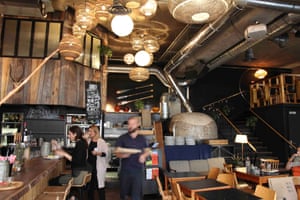 Classed an official historic monument, the Secrétan market hall reopened two years ago after a lengthy restoration of its imposing 1868 structure. The interior is spectacular, with a soaring ceiling lined with crisscrossing wooden beams but, sadly, the whole space has been given over to Les 5 Fermes, an organic supermarket, rather than the traditional food stalls that were here for over a century. In the style of a “marché for the future”, it also has a gym and fashion store, as well as upmarket butcher-restaurant Hugo Desnoyer, whose prices are beyond the pockets of most local residents. Fortunately, there is Wanted, a hip but eminently affordable wood-fired pizzeria, whose pastas and pizzas cost €12, and which offers brunch and DJ sets at the weekend.
• Tue-Thu 8.30am-7.30pm, Fri-Sat 8.30am-8pm, Sun 8.30am-2pm (restaurants open in the evening), 29 Avenue Secrétan, 75019

If you think you’ve got a great Black Friday flight ‘deal’ you probably don’t, warns Which?