Paris has a vibrant secondhand record scene, with stores all over the city stocking rare vinyl of everything from Ghanaian Highlife to calypso, classic chansons françaises – Edith Piaf, Charles Trenet, Georges Brassens, Serge Gainsbourg – plus electronic music and techno. With a new exhibition, Music Migrations (palais-portedoree.fr, until 5 January 2020), dedicated to the multicultural influences that transformed the Paris and London music scenes from the 1960s to the 80s, this is a good time to discover the top disquaires unearthed by local DJ and record dealer, Gwen Jamois.

The 11th and 12th arrondissements may be the new centre for record stores, but the Paris music scene used to be centred across town, just below Montmartre in the Anvers neighbourhood. Today, everyone’s favourite spot there is Balades Sonores, which is packed to bursting with vinyl, CDs, cassettes, plus a lot more – ceramics, recycled designer clothes, handmade shoes, books, art and photo exhibitions. You wonder how anyone finds anything, though this could explain its popularity with diggers looking to uncover a priceless gem. Thomas Changeur founded the first store seven years ago, expanding next door in 2015. One section specialises in pop, rock and a big selection of French artists, while the other is more eclectic: new recordings and reissues of little-known world music, jazz, funk and electronic. Every Thursday at 7.30pm there is a live showcase event.
• 1-3 Avenue Trudaine, 9th arrondissement, baladessonores.com. Metro: Anvers 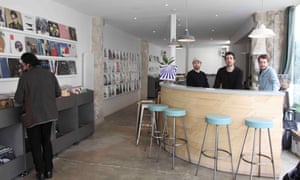 This bright, modern store, opened last year, is run by three young enthusiasts, Edouard, Dave and Gregory, who as well as being disquaires are part-time DJs, record producers, studio engineers, musicians and radio broadcasters. The spacious location is also used for regular events showcasing new releases, with DJ sets and bands performing live. The venue is clearly for serious fans of electronic music, what they call synth-based music, an umbrella term encompassing house, techno, experimental and electro. But diggers will also find a gold mine of rare collectables: Arab and Israeli sounds, Japanese, Somali …. Edouard says he wants “everyone that comes in to find something that catches their interest – that could mean paying 50 cents for an old single or €30 for one of our limited editions re-pressed on the Big Wax label”.
• 72 rue Jean-Pierre Timbaud, 11th arr, bigwaxrecords.fr. Metro: Parmentier 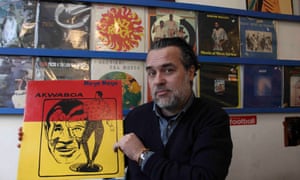 This shop just off Place de la République became a cult address for second-hand records soon after Manu Bouilli opened in 2009. Manu (pictured) made his name as a DJ, a producer for the likes of former Fela Kuti drums legend Tony Allen, and for running the famed Cithéa nightclub. Superfly is invariably filled with DJs and diggers searching through about 10,000 records. Manu says: “The collection is essentially rare black music – jazz, soul, reggae, Cuban, African, Caribbean, Puerto Rico, Brazil.” He also has a specialist label for reissues of hard-to-find Afro-Cuban recordings. These are pressed in Japan in limited 1,000-copy batches: about 25 are issued each year, and nearly all sell out immediately.
• 53 rue Nôtre Dame de Nazareth, 3rd arr, on Facebook. Metro: Strasbourg-Saint-Denis 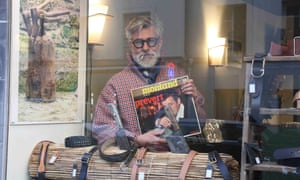 The prime area for vinyl is between Place de la Bastille and Place de la Nation, on the border of the 11th and 12th arrondissements. One of the most unusual addresses is Vinyl Office, part disquaire, part leather-working studio. Fanatic vinyl collector Ronan Pierre (pictured) opened the shop in 2008, originally specialising in rock, 1960s, punk and garage. But he says: “I got fed up selling always to the same customers, so now you find everything from film sound tracks, French yé-yé, classical and oriental.” A few months ago he split the space with leather craftsman Pierre Bonnaventure, who makes made-to-measure belts, buckles and pouches. Other nearby addresses: Le Silence de la Rue, Heartbeat Vinyl, La Cuve à Son, a vinyl and wine shop, and Citeaux Sphère, a disquaire bistro.
• 9 rue Trousseau, 11th arr, lesdisquairesdeparis.com. Metro: Ledru-Rollin 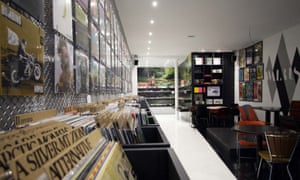 Two minutes’ walk from Gare du Nord, the Walrus is a cool hangout where music-lovers can relax in leather armchairs and drink craft beers, organic wine and barista coffee. They can then choose something from the playlist on a funky jukebox in a 70s-style plastic phone booth, which plays all the stock on display in the shop. Caroline Kutter and Julie David worked in the music section of the Fnac chain store before opening Walrus, and although the say their preference is for Brit 1980s post-punk, there is a varied selection of vinyl and CDs, new and reissues, spanning blues and indie, experimental and cult French artists. There are regular in-store events with French bands and DJs, as well as Broc Vinyl every three months, when a dozen dealers set up stands selling vintage records.
• 34 rue de Dunquerque, 10th arr, the-walrus.fr. Metro: Gare du Nord 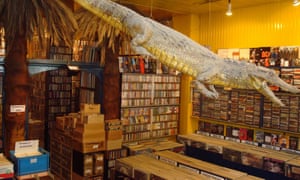 The venerable Crocodisc is a Paris music institution, opened in 1978 and still run by the ever-enthusiastic Philippe Soisson, in the heart of the student quarter opposite the Sorbonne. Originally it only dealt in secondhand records, but it is now 50/50 new and old, though still essentially vinyl, with a few CDs and cassettes for a small but growing minority market. It has expanded into two adjoining stores: one essentially rock, folk and French bands; the other with more funk, soul and an incredible collection of rare world music. In total, Philippe has a stock of half a million records, with up to 60,000 on display. He says: “Our customers have changed from being basically music-mad students in the 80s to collectors, DJs and diggers looking for the ultimate bargain in the €1 boxes.”
• 42 rue des Écoles, 5th arr, crocodisc.com. Metro: Maubert-Mutualité or Cluny-La Sorbonne 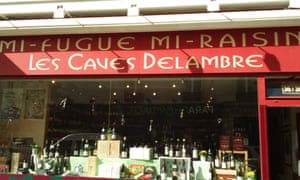 Near the grand cafes and theatres of Montparnasse, Serge Ghanem opened this unique shop in 2006, specialising in classical music, alongside an eclectic collection of wines that are essentially organic, biodynamic and natural. An economist by profession, he worked for a baroque music label, Alpha, before opening the shop. “Economically I knew we could never survive as a purely classical music boutique with so much competition from the internet,” he said, “but this wine and music mix certainly works for us.” The solely classical collection is made up mostly of new pressings, and mainly CDs rather than vinyl, from the middle ages to baroque and contemporary, including opera. Once a month, with well-known local bookseller Falado, he organises La Dive Note, a classical recital with wine-tasting.
• 36 rue Delambre, 14th arr, mifuguemiraisin.com. Metro: Edgar Quinet 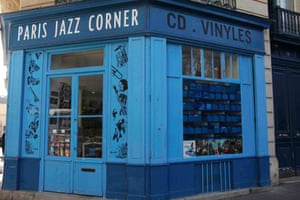 This spot in a quiet corner of the Left Bank is just what you would expect of a serious jazz boutique: great music on the sound system, customers speaking in hushed tones, and highly knowledgeable advice from the staff. While many specialist jazz stores have disappeared, music lovers from around the world come here to seek out rare grooves, with a new generation of customers coming from China and Russia. The expert who runs the store is Maxime Hubert, who has worked here since it opened in 1991; the actual owner, Arnaud Boubet, is based near Montpellier, where he has a second Jazz Corner disquaire, cafe and concert venue. The 12,000 vinyls and CDs on display are a fraction of the whole collection, and apart from the core stock of jazz and blues, it also features R&B, soul, latin and gospel.
• 5 rue de Navarre, 5th arr, parisjazzcorner.com. Metro: Place Monge 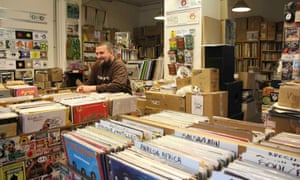 The owner of this legendary reggae record store, Pierre Patate (pictured), has been selling records and producing for his own Belleville International label since 1992. The place looks more like a junk shop, with scores of cardboard boxes crammed with vinyl piled on top of each other. But this is the address for diggers, DJs and specialists looking for reggae, roots and digital. He reckons the reggae scene is much more exciting in France and Europe now than in the UK or even Jamaica. When he goes to London to see his regular distributor, he gets quizzed on the latest bands in France rather than vice versa – artists like Manudigital, Stand High Patrol and Taïro. Patate also sells Rasta accessories – grinders, incense, hats – but warns: “Please don’t ask me for grass – you have to get your own!”
• 57 rue de Charonne, 11th arr, patate-records.com. Metro: Ledru-Rollin 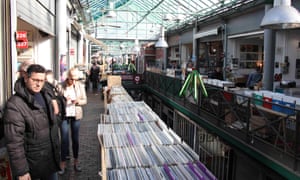 Parisian flea markets can be a gold mine for vintage vinyl, but few can compare to the hidden-away Dauphine section of the labyrinthine Marché de Clignancourt. Ten years ago, part of the first floor was turned into a dedicated music section and today, with around 10 stores, this is the largest permanent space selling secondhand records in Europe. Monsieur Hichem, a friendly part-time DJ, runs record label and vinyl stand Rocket Records, which specialises in rockabilly, although you will also find rare Alain Delon singles, Gainsbourg and of course Johnny Hallyday. Eric Plaze has a much funkier space, Blazing Music, decorated with graffiti. He has just come back from 20 years working at Academy Records in New York, and his specialities are first pressings of funk, hip-hop and disco, while next door’s Panorama Records is the place for Latin, African, Oriental and experimental music.
• 132-140 rue des Rosiers, Saint-Ouen. Metro: Porte de Clignancourt

• Know a great Paris record shop? If so, tell us about it in the comments below

A time piece of history ·