From the vantage point of this cliff fort, there are clear views over Cape Cornwall to where the Channel and the Atlantic meet. On a stormy day this is a truly wild place, as the coastal winds batter the shoreline. Kenidjack is a multivallate fort, which means it has more than one rampart. Most of the southern end of the fortifications has been lost to erosion but much of the triple northern rampart is still intact. There is evidence of neolithic stone quarrying and of tin mining throughout the bronze and iron ages: tin would have been a prized commodity in the bronze age, because it is essential to make bronze itself. This whole area must have been important to trade, and its inhabitants may have adopted snippets of language or culture from beyond these Cornish shores. Remains of a cairn circle can be found up near the ruins of the tin mine and Ballowall Barrow is a short walk south, past the remains of the early Christian St Helen’s Oratory and the 19th-century tin mine at Cape Cornwall. To reach Kenidjack, walk north on the coast path from the National Trust’s Cape Cornwall car park. 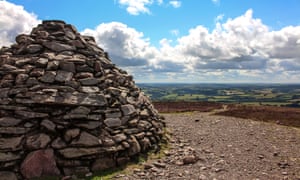 On the slopes around the modern-day cairn on Dunkery Beacon are the remains of at least five bronze age cairns, from 2000-1600BC. They were burial sites topped with stone but, after a few thousand years, not all are in good shape. The largest and most visible is on the north side, a large mound, 22 metres across. It may have been the closest place to the gods, so a fitting place to enter the afterlife. Some visitors climb from Dunkery Bridge car park, just over half a mile away; others prefer the three-mile route from the east, along Macmillan Way from Wootton Courtenay. It’s the highest point in Somerset, and the views are wonderful. 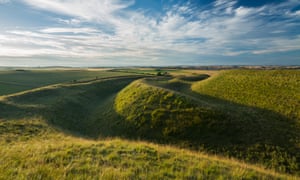 Near Dorchester, this is one of the most iconic hillforts in England: at 47 acres – the size of more than 50 football pitches – it is also our largest, and may even be the biggest in Europe. It was originally the site of a causewayed enclosure, a ritualistic tribal meeting ground in the neolithic period (4000 to 2500BC). The site was put to use again in around 600BC as a small hillfort, which was later expanded to the vast site we see today. People lived and worked here, making textiles and working metal. Their roundhouses were built in rows, much like our modern streets. It is a beautiful site to visit, with stunning views across the Dorset countryside. Although the largest, it is not the only hillfort in Dorset: there is the tree-covered Weatherby Castle to the north-east, the tumbling remains of Flower’s Barrow on the coast and Woolsbarrow hidden away in Wareham Forest 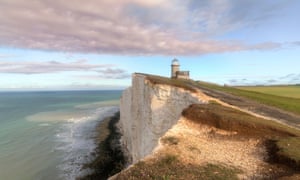 The Seven Sisters are, along with Dover’s White Cliffs, the most iconic of all the natural landmarks on the south coast. The rolling downs and towering chalk cliffs make them a place like no other. Archaeologists are working to discover more about the area’s prehistoric residents before it all falls into the sea. The outer enclosure around Belle Tout lighthouse may date from the third millennium BC. In the mid-1970s a section of cliff fell away to reveal a circular shaft running down inside the cliffs to the beach, which had been noted as a pit on older maps. It was wide enough for a man and had footholds running 43 metres to the ground. In the very centre of an inner enclosure thought to be bronze age, it has been described as a well, or possibly ritual shaft, but its use is anyone’s guess. The shaft soon vanished into the sea, but in 2016 storms swept away material from the shore to expose its flat bottom end as a shallow circular pit in the base material. The outer ramparts are still very visible on the cliffs above. There’s a National Trust car park and visitor centre with cafe on the site. 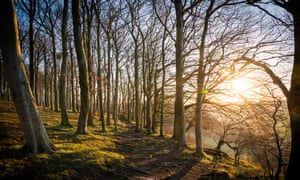 The views from this iron-age promontory hillfort are a rare treat in a part of the country more associated with urban sprawl. Sharpenhoe is said to mean “sharp spur of land”, and clappers comes from the Latin “claperius”, referring to the medieval rabbit warren that once covered the site. The fort may have been one of a line of defended sites across the Chiltern Hills. Early Romano-British pottery has been found, and postholes suggest the presence of an earlier palisade or huge timber wall, with a four-metre-wide ceremonial entrance. With its enchanting copse of beech trees, this is a beguiling place to explore. It’s best reached from the National Trust car park. 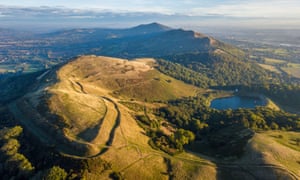 The 17th-century diarist John Evelyn said the view from this hillfort atop Herefordshire Beacon was “one of the godliest vistas in England” and it is still regularly cited as one of Britain’s best views. It certainly is stunning, and it is not hard to see why iron-age Britons chose to build here, in the second century BC. The tiers of ramparts, built up throughout the latter iron age, stretch for more than half a mile and enclose an area of 13 hectares (32 acres). At the height of its occupation, there could have been as many as 120 hut circles on the site, housing a substantial population. The nearest parking is opposite the Malvern Hills Hotel. An easy walk to the south is a second hillfort owned by the National Trust, known as Midsummer Hill. 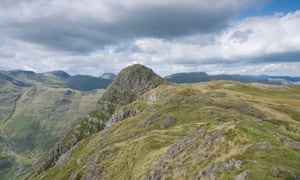 Nearly a third of the neolithic stone axes found in Britain are made of Langdale hornstone, or greenstone, found near the summits of Pike of Stickle (pictured) and Harrison Stickle, two of the Langdale Pikes – a difficult place to get to. Broadcaster Neil Oliver says the site of the Langdale axe factory, in the Lake District, might have been as important as the axes themselves. Such was the industry on this site that rejected axes can still be found to this day on the scree slope east of the summit of Pike of Stickle. For those willing and able to brave this treacherous place, a manmade cave can be found around 50-100 metres down the scree slope. It is possible this was a Neolithic construction, built for the axe carvers to retreat into when the weather turned on the mountainside. It’s best reached from New Dungeon Ghyll car park. 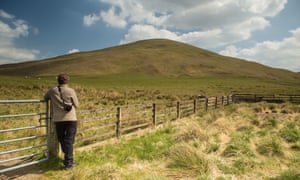 On top of Arbory Hill are the well-preserved concentric banks of a multi-rampart fort, with extensive views over Clydesdale. Today, the railway line and the M74 take advantage of this opening in the hills, but it would have also been an important route for the Romans, with the remains of their road visible as a scar in the landscape. It is even probable that they in turn built over an existing iron age trackway or trade route. The fort may have supported a small population, as remains of a timber-framed house and a rectangular stone foundation have been found in the inner circle. For a bird’s-eye view of the fort, continue up neighbouring Tewsgill Hill. It’s a 45-minute walk from a layby on Station Road, Abington. 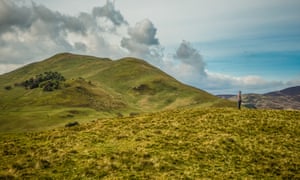 This hill fort (not to be confused with the vitrified fort of the same name in Forgandenny) is a stone’s throw from Edinburgh, on the north-eastern end of the Pentland Hills at Easter Howgate, looking down to the Glencorse reservoir. During the middle of the first millennium BC, the fort would have had a large wooden gateway guarding the entrance, of the kind later built for timber colonial forts in the American wild west. Later in the fort’s history, two more earth ramparts were built, and it is thought that the earth house was constructed after the Roman occupation. The Votadini, who constructed this fort, also commanded the one on the extinct volcano of Arthur’s Seat in Edinburgh. Park at Castle Knowle car park, near Glencorse. 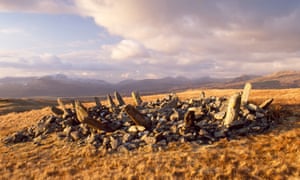 A stone crown sits atop a remote Welsh hill in an area with very few signs of habitation. Far below, a steam train chugs through the valley, but here there is only the sound of the wind through the stones. A local guide poetically translates the name as “fortress of waves on the hill”, but it could also mean “hill of the throne with the flag”. Neither Victorian treasure hunters nor 1930s army target practice even dented the majesty of this isolated bronze age cairn. The stones would have once stood upright, but they have slipped outwards, giving it its current crown shape. Today it is little more than a mass of stones, but the 1920s Inventory of the Ancient Monuments of Wales describes the remains of a burial chamber eight feet by five, with a two-foot stone resembling the gables of the house.