Our Guardian Tokyo Week has touched on everything from unauthorised picnics to underground rap battles between businessmen. We explored in depth whether next year’s Olympics can live up to the 1964 games, how Tokyo is bracing itself for its next once-in-a century earthquake, and how life is changing for women in the city.

We asked you for your thoughts on how the city’s changed, and for your comments on our coverage.

Here’s what you told us:

‘What is so great about Tokyo “finally opening up”?’

In response to our report by the Guardian’s Tokyo correspondent, Justin McCurry, on whether the city is opening up to the outside world, Lou, who has lived in Tokyo for 20 years, said:

Tokyo is changing, but not for the better. Many old, beautiful traditions are dying out. Young people aren’t upholding them. English is infiltrating and the result is not good – the Japanese language is chock full of random, annoying English words.

Mass immigration will be the nail in the coffin. Japan will be ‘globalised’ and its traditions relegated to tourist spots. Why do we want Tokyo to be like London? What is so great about Tokyo ‘finally opening up’? The whole world is becoming a homogenous lump. Where will the tourists go then?”

On social media we asked readers to share their hopes and fears for the 2020 Tokyo Olympics. @kakiandbambino said he hoped no-one – players, staff or spectators – dies due to heatstroke.

The Guardian’s athetics correspondent, Sean Ingle, reported from the city on whether Tokyo 2020 can live up to 1964’s Olympic legacy: “Such was the event’s success that it has set the bar dazzlingly high for Tokyo 2020.”

Toby Miller got in touch to highlight the darker side of those games. He said the 1964 Tokyo Olympics was “an environmental and human, classic Cold-War disaster”. Miller, author of Greenwashing Sport, describes environment destruction caused by the construction of the high-speed rail link between Osaka and Tokyo.

The canals, sea, and rivers below the railway were inundated with concrete and landfill, and a centuries-old field of seaweed destroyed. Water stagnated, sludge emerged, and sea life perished. Estuaries turned into cesspools and/or were transformed into roads. The tramway system was virtually destroyed in favor of freeways and cars became dominant. Clearance of living things saw hundreds of thousands of homeless cats and dogs killed by the state. As with all very rapid, massive modernizations, from the US through the Soviet Union to China, this transformation was achieved through violence; in this case, the horror of war and its detritus, followed by preferential Cold-War terms.”

Mid-week a curious email landed in our inbox. The subject line was “Tokyo’s Floating Stadium”, and it was sent from Florian Busch Architects, in Shibuya-ku. It announced:

After several plans to build a new National Stadium for the 2020 Olympics in Tokyo had been cancelled, the embarrassment was redeemed by an almost happy ending. In July of 2020, the New National Stadium, a ship, anchored under Odaiba’s Rainbow Bridge and Tokyo became the first host of an era of a newfound Olympic spirit.”

This “floating stadium” was a groundbreaking architectural feat that would travel the world, from one Olympic city to the next.

It also wasn’t real, but in fact an elaborate tease devised by the architect firm “in response to the mess surrounding the Olympic stadium”.

We asked readers to share their thoughts about how Tokyo was changing. Laurence Williams, associate professor in the Faculty of Foreign Studies at Sophia University, a private university in Chiyoda ward in central Tokyo, said:

Japanese academia is much more open to non-Japanese professors than it used to be. Tokyo itself is diverse and exciting and this is a great time to be working in the city. Numbers of international students are rising sharply (because of demographic decline, universities are increasingly looking abroad). Most international students are still from elsewhere in Asia, although US/UK/Europe numbers are rising.”

Susannah, who lives in Shibuya, sent in this photo of the Imperial Palace from across the water, and writes: “This is just after New Years, and shows an impressive contrast between nature, old Japan, and new Japan.” 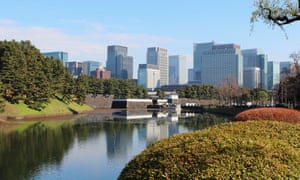 ‘Is this racism? Yes, but not, I think, in a straightforward way’

David Chart wrote in to say that he served on Kawasaki City committees dealing with issues affecting foreign residents, and reckons the treatment of them hasn’t changed. A couple of years ago he helped organise a survey of foreign residents living in Kawasaki to find out problems they were facing. In a blogpost at the time about the survey results, he said the Japanese police occasionally single out foreigners due to their race, and ask them questions, and “sometimes they make them call their mothers”. He told Guardian Cities: “The composition of the foreign population has changed a lot even while I have been here, but the problems they face have changed much less. Is this racism? Yes, but not, I think, in a straightforward way.

On Tuesday we published an investigation by Guardian Cities and the Waseda Chronicle into how Tokyo’s suburban housing became vast ghettoes for elderly people. Reader Lewis Parley wrote in to say:

Your article about the aging population of Tokyo’s suburban housing estates was very informative. I think it would be beneficial to the series if you contrast this phenomenon with the renaissance some more central public housing estates are experiencing due to the influx of immigrant families ( Chinese in Kawaguchi, Indian/ Bangladeshi in Ojima, Koto-ku and Kasai, Edogawa-ku). By also featuring these places, I think you’d give the reader a more balanced picture of the changes Tokyo’s population is experiencing.”

During the week, people shared photos of their favourite and suprising Tokyo scenes on Twitter and Instagram, such as these posts:

‘It had become a building site’

Trevor Skingle got in touch to describe the tension he’d observed between modernisation, and the desire to preserve the city’s heritage.

Take for instance the old ‘Habutae Dango’ that was located near Nippori Station with its 200-year-old history as a tea house and dango (sweet dumpling shop), a favourite haunt of the poet Masaoka Shiki and the author Natsume Soseki, and repository of a few Shogitai relics from the 1868 Battle of Ueno. Each time I visited Tokyo I would make a point of visiting to enjoy their dango and matcha green tea whilst at the same time contemplating the wonderful garden view available only to patrons only to find on my visit in 2018 that it had become a building site.”

On the other hand, he adds: “As a Tokyo history buff I am astonished at some of the historical finds that I’ve made which are still there.”

Caribbean Villas for the Whole Family