Home » Destinations » What caused the Genoa bridge collapse – and the end of an Italian national myth?

On 14 August last year, the city of Genoa in northwest Italy woke to a strong summer storm. By 11.30am, the rain was so heavy that visibility had fallen dramatically. Videos captured by security cameras show vehicles slowing down as they crossed Morandi Bridge, which grew progressively more enveloped in a grey mist.

A few minutes later, a 200-metre section of the bridge collapsed, including one of its three supporting towers. The tragedy killed 43 people and left 600 homeless.

It also dealt a hammer blow to Italy’s once-proud engineering history – and the country’s confidence in its mastery of a key construction technology: concrete.

What is Guardian concrete week?

Our species is addicted to concrete. We use more of it than anything else except water. Like that other manmade wonder material, plastic, concrete transformed construction and advanced human health. But, as with plastic, we are only now waking up to its dangers.

Concrete causes up to 8% of global CO2 emissions; if it were a country it would be the world’s worst culprit after the US and China. It fills our rubbish dumps, overheats our cities, causes floods that kills thousands of people – and fundamentally changes our relationship to the planet.

Can we kick our addiction, when it’s so hard to imagine modern life without it? This week Guardian Cities celebrates the aesthetic and social achievements of concrete, while investigating its innumerable harms, to learn what we can  do to bring about a less grey world.

A little more than a kilometre long, crossing the Polcevera valley, a river, a railway depot, a densely populated area and several large factories at an average height of 45 metres above the ground, Morandi was one of the longest concrete bridges in the world when it opened in September 1967.

The 1960s were Italy’s boom years. For the first time, many Italians could afford a car. But the country’s roads – many of them narrow, meandering up mountains and twisting through city centres – needed modernising. Morandi Bridge was the centrepiece of a brand-new network of highways connecting Milan and Turin in the north to the tourist hotspots of the Ligurian Riviera, bypassing a congested Genoa and ultimately completing the coastline highway that runs from southern France to Tuscany. 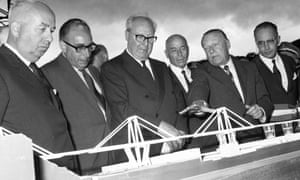 Named after Riccardo Morandi, the engineer who designed it, the new bridge was a multi-span, cable-stayed bridge similar to the Brooklyn Bridge: regular towers, from which a series of exposed steel cables stretched to the bridge’s deck.

But, although similar in shape, Morandi Bridge was very different in other ways. The deck was entirely made of reinforced concrete, and it had only four cables per tower, instead of the usual dozens. Crucially, the cables were covered in pre-stressed concrete – a type of treated concrete invented by the French engineer Eugène Freyssinet. Unlike normal reinforced concrete, which is generally best suited to resisting compression, the new pre-stressed concrete was specifically designed to resist traction.

As a result, Morandi Bridge was stronger and lighter, with minimal use of steel, than any other bridge of its era – and boasted a clean, distinct design that quickly became a symbol of Italian engineering, tangible proof of the country’s technical abilities.

“The bridge’s concrete structure won’t need any maintenance,” boasted an article in La Stampa newspaper ahead of the bridge’s opening. “Neither will its stayed cables, which are protected from atmospheric agents by their concrete vest.” 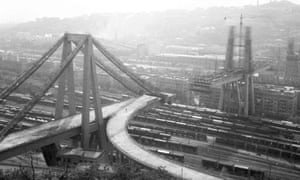 Morandi himself became one of the most respected engineers in the nation – going on to use the same technique elsewhere, including at Rome’s airport and a bridge over Libya’s Wadi el Kuf that was the highest single-span bridge in the world – and helped Italy earn the reputation as the nation that could bend concrete. He died in 1989.

The material was perfectly suited to postwar Italy. The country couldn’t afford the amount of steel necessary to build something like the Brooklyn Bridge: steel was expensive to import because of international sanctions against the fascist government, and Italy lacked the resources to produce steel domestically. It was, however, rich in the clays and river sediments necessary for concrete production. Led by Morandi, the country’s engineers learned how to achieve the same results with concrete that they would with steel.

The legacy? Thousands of concrete viaducts, tunnels and bridges that together form a vast engineering triumph.

Today, the country is still one of the top cement producers and is home to the eighth largest cement company in the world.

“Morandi, for us engineers, is still a reference and considered to be a precursor,” says Marco di Prisco, a professor of construction science at the Polytechnic Institute of Milan and researcher on the life expectancy of concrete buildings.

But being an innovator, Di Prisco notes, often comes at a cost.

“Every time you create something new, you take some risks.”

In the 1960s little was known about the interaction of materials, or the effects of pollution and climate on corrosion. Traffic volumes were very different, and concepts such as the durability or lifespan of a building were not commonly discussed. “Back then, you didn’t really think in terms of durability,” Di Prisco says. “Whereas today we focus much more on how to extend a building’s life. We even come up with a maintenance guide to keep structures in good conditions.” 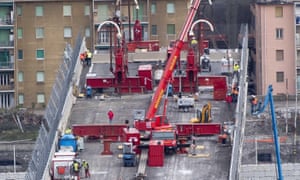 Why exactly the bridge collapsed last August is yet to be understood. A team of experts working with the investigators issued a report this month stating that the bridge samples analysed showed evidence of corrosion and some construction errors, but they steered clear from attributing a cause to the collapse.

“A bridge is like a car,” says Luigi Gambarotta, professor of structural mechanics at the University of Genoa. “You can’t overload it, and to keep it working you need to change the broken parts.”

That was difficult in the case of Morandi Bridge: the cables were difficult to inspect, and it was unclear how they were coping with increased traffic loads.

“When I visited the bridge in the early 1990s for a documentary on Morandi’s work, I was [surprised] to see fissures and corrosion just 20 years after its completion,” says Giuseppe Imbesi, an architect who worked with Morandi on a bridge proposal for the Strait of Messina.

Morandi himself was surprised to see the structure age faster than he had anticipated. In 1979 he issued a report detailing a number of interventions to protect the structure against pollution from nearby factories and the salty sea air.

Little, however, was done, and by 1992 the trademark concrete cables were heavily corroded. The company that managed the bridge, Autostrade per l’Italia – then owned by the state – decided to add extra new cables around the corroded ones, rather than replace them. It also neglected to retrofit the remaining two sets. 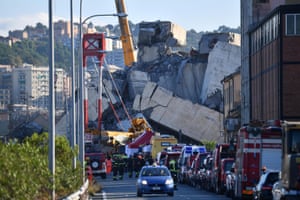 “It was a criminal, criminal act not to intervene,” says the architect Antonino Saggio, who is leading a campaign to save what remains of the bridge. Despite Saggio’s efforts, the bridge is currently being cut into pieces and torn down. A new bridge designed by Renzo Piano is due to open in 2020.

Despite Italy’s rather notorious reputation for criminal infiltration into public works, few suspect mafia involvement in the bridge’s collapse. According to the concrete historian Tullia Iori, a professor of architectural engineering at the University of Roma Tor Vergata, the concrete industry was largely family-owned at the time and was easier to investigate, and there was a robust tendering system for public works, which were assigned directly by the state and included a high level of technical scrutiny.

Instead, it was probably simple neglect that felled the bridge. In April 2018, Autostrade – now a private company – finally decided there was no more time to waste, and issued a tender offer to retrofit the bridge. The repairs were supposed to start last autumn.

“They waited 25 years and then the bridge collapsed. This is how things go in Italy – you start something and you never finish it,” says Saggio.

‘It was apocalyptic’: the police officer whose sniffer dog saved six people in the Genoa bridge collapse

Morandi’s legacy, and with it the Italian national myth of concrete mastery, is now in doubt. “He was an engineer with an incredible creativity, and was the best Italian bridge designer we ever had,” says Emanuele Codacci-Pisanelli, a bridge engineer who helped restore Morandi’s Wadi el Kuf Bridge.

But his structural ideas, despite being sound on paper, were difficult to execute. “Imbuing stayed cables in pre-stressed concrete is such a difficult technique. It’s pretty complex,” explains Codacci-Pisanelli.

“Morandi’s bridge was the most beautiful, the largest and the most audacious bridge we had in Italy,” says Iori.

“It was the symbol of the country’s rebirth. We should have preserved it.”

A Very Brief History of Billionaires Going to Space

You say Camino and I say Kumano ·