Home » Destinations » ‘We’re black sheep’: the people who are fascinated by soil in cities

A recent gathering of scientists on the upper west side of Manhattan enthused about a crucial element in the formation of the surrounding city. The substance talked about in revered tones? Soil.

In a fairer world, soil would be receiving reverence from people well beyond the fourth annual NYC Urban Soils Symposium, given that the slender outer layer of the planet supports the life that treads, grows and flies above it. As it is, though, it is up to soil aficionados to extol the urban importance of this crumbly manna.

“Soil is a neglected resource; it can solve a lot of the environmental problems we have,” says Richard Shaw, a US Department of Agriculture soil scientist who grew up in urban New Jersey but was drawn to the outdoors and found himself fascinated by soils.

For the past decade Shaw has been involved in the New York soil survey, plodding around the city’s parks and community gardens taking soil samples. This has usually involved digging a 4ft-deep pit, a process that has attracted police attention. “They’d ask what we are doing and then they’d spend half a day talking to us once we told them,” he says. “Others will say ‘sorry to hear that’, like it’s the worst job in the world.” 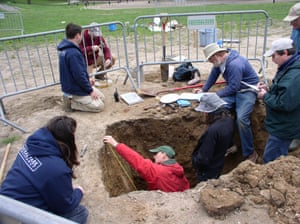 Taking gallon-sized samples of soil from select spots helps researchers put together a soil map of an area. Layers of soil have differing amounts of sand, salt and clay: some have lots of organic matter, others hold a lot of water. Typically, in cities, the soil is contaminated.

“In New York, debris and coal ash was used to fill in the wetlands, which has altered the chemical properties of the soil,” Shaw says. “Soils in cities tend to have more problems, but the situation is getting better. Still, if you want to stick a tree in the ground, you should know what’s in the soil first.”

Not only is soil the basis for growing food, in urban communities that suffer from food deserts as well in rural farming areas, it also provides a crucial filter for pollution and regulates water flows.

Where is the world’s most polluted city?

It can also help address climate change. Carbon is sequestered in both soils and the plants they support, while cities that grow plenty of trees can provide shade to residents and reduce the urban heat island effect. Coastal places can also use soils to bolster wetlands that provide a buffer from sea level rises.

“Urban environments are a heat sink, so the more vegetation there is, the more liveable they are and the less energy we need to cool people down,” says Maxine Levin, who had a 40-year career as a soil scientist for the US government.

“We are learning more and more all the time. Places like Detroit are bringing in urban gardening and farming. We are seeing rooftop and vertical gardens. It’s encouraging, Soil really is the basis for life, after all.”

Shaw has long been fascinated by soils. “They have their own science and geology – I thought, this is the life for me,” he says. “The inclination for many scientists is to work in a beautiful pristine area – it’s a bit of a black sheep, working in an urban area. But urban ecology is fascinating, and urbanisation isn’t going to stop any time soon.”

Passenger on American Airlines Gets Heartwarming Note from Flight Attendant