Essediya Magboul leads a group across the open-air market of Porta Palazzo in Turin on a windy Saturday morning. Stopping at a stall, she picks up a bottle of laban, and gives a detailed account of the meticulous mixing needed to prepare the Middle Eastern yoghurt drink. “It’s a Ramadan must,” she adds, smiling, before continuing to an Arab-owned bakery where the owners offer samples of ghoriba cookies and answer questions.

In the space of a few streets, she takes her guests from Eastern Europe to East Asia, via the Middle East. The walkers could easily be mistaken for tourists, but they are in fact locals.

Magboul is a Migrantour guide, and the concept is to show Italians the wealth of contributions made to their home cities by migrants. “I hope my storytelling can help Italians see us Muslims in a different light,” adds Magboul, who moved from Morocco to Italy in 2002 and says she has often experienced prejudice because she wears a hijab.

The Migrantour concept started in Turin in 2010 and has since spread to nine other Italian cities, including Bologna, Naples and Florence. The tours cost an average of €12 and more than 150 guides are employed on a freelance basis. 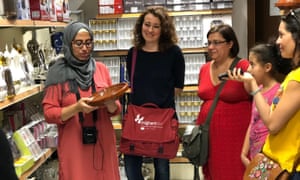 “Our walks aim at giving value to the impact that foreign communities have had on our neighbourhoods for centuries,” explains Rosina Chiurazzi, coordinator of Migrantour Turin and a guide herself. “Now more than ever, there’s a need in this country for initiatives that portray migrants as locals too, instead of pointing out their diversity.”

On another Turin Migrantour, guide Monica Ilies tells her group how she moved to Italy straight after high school and reunited with her mother after six years apart. “When the Ceausescu regime fell, Romanians were finally free to leave the country and escape poverty,” she explains as they tour a Romanian butcher’s shop.

“Many, like my mother, landed a job in Italy as domestic workers. Having to grow up without a mother was my hardest challenge as a teenager.” The 36-year-old says she is upset by stereotypes that portray Romanians as thieves, sex workers or domestic helpers. “What they don’t see is that migrant mothers make huge sacrifices to provide a better future for their children,” she adds. “It seems absurd having to highlight it, but yes, we are human beings too.”

One participant, Roberta Comba, is clearly moved by the story. A teacher at a vocational school, she says she joined Migrantours to learn more about the lives of foreign students in her class. “I wanted a chance to feel closer to them,” she says. “These encounters help us understand the struggle of having no choice but to leave your family and country for a bigger purpose, a pain we lucky ones often don’t know.” 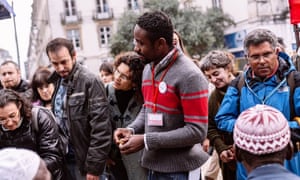 Chiurazzi says work is under way to make their tours part of the school curriculum. “Current participants are often people who already have positive attitudes towards migration and simply want to learn more,” she says. “So we thought about involving schools through daytime walks, to help educate younger generations. Students often come to us thinking migrants make up 70% of the Italian population today because they’re bombarded with headlines that make them perceive migration as an alien invasion. With accurate data and face-to-face encounters it is easier to fight fake news and unnecessary hate.”

At the opposite end of the country, Abubakar Dukuly leads a small but lively group of locals around Catania in eastern Sicily, where migrants make up 4% of the population. The attendants are openly curious as Dukuly takes them through San Berillo, a historic quarter of the city that has recently become home to a large Muslim community. It is an area that most residents overlook.

He explains how he was born in a refugee camp in Guinea on the west coast of Africa, his family having left neighbouring Liberia when civil war broke out. Later he took the dangerous desert route through Libya before a dinghy brought him across the sea to Sicily in 2017. Dukuly recently turned 18 and so lost the humanitarian protection normally granted to unaccompanied minors. He is worried about his future but maintains his warm smile.

How a small Turkish city successfully absorbed half a million migrants

“There’s a tendency to use the ‘us v them’ narrative today,” participant Stefania Di Pietro says at the end of the tour. “But during the walk Abubakar found a kind of tree that also grows in Sub-Saharan Africa, and joked about how the bad traffic reminded him of home. Noticing geographical and urban similarities between Sicily and Africa helps us challenge that narrative.”

Flavia Monfrini, the coordinator of Migrantour Catania, says most Sicilian participants tend to be young but she hopes to engage older generations too. “The current government is trying to brainwash us and make us think there’s an emergency we have to protect ourselves from,” she adds, “but the truth is that human mobility is, and will always be, part of our social fabric. Migration has always been the normality, especially here in Sicily.”