Home » Destinations » ‘We all suffer’: why San Francisco techies hate the city they transformed

It was a beautiful winter day in San Francisco, and Zoe was grooving to the soundtrack of the roller-skating musical Xanadu as she rode an e-scooter to work. The 29-year-old tech worker had just passed the Uber building when, without warning, a homeless man jumped into the bike lane with his dog, blocking her path.

She slammed on the brakes, flew four feet into the air and landed on the pavement, bleeding. “It was one of those hardening moments where I was like, ‘Even I am being affected,’” she recalled.

It should be noted that Zoe, who asked not to be identified by her real name because she was not authorized by her employer to speak to the press, is not the stereotypical tech bro who moves to San Francisco for a job and immediately starts complaining about the city’s dire homelessness crisis. She arrived in 2007 to study at San Francisco State University and had a career in musical theater before attending a coding bootcamp and landing a job as a developer advocate at a major tech company. 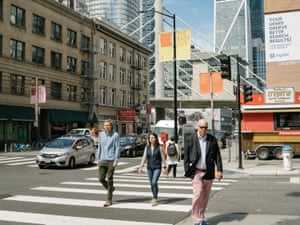 But the fall and other incidents, including getting mugged and having her phone stolen, have all contributed to her growing sense of insecurity in the area. She told the Guardian the tale of her scoot, interrupted, because she said it was a perfect example of her own – and perhaps the broader community of tech workers’ – increasingly hate-hate relationship with San Francisco. “This guy needed services to help him,” she said of the man who caused her to fall, “and we all suffer because of the issues that are not being addressed.”

A quarter of a century after the first dot-com boom, the battle for San Francisco’s soul is over and the tech industry has won. But what happens when the victors realize they don’t particularly like the spoils?

Tech workers are increasingly vocal about their discontent with the city they fought so hard to conquer. In May, the median market rent for a one-bedroom apartment reached an all-time high of $3,700 a month, according to the rental site Zumper. Meanwhile, the city saw a 17% increase in its homeless population between 2017 and 2019, and residents complain of visible drug usage, fear of crime and dirty streets. Even Marc Benioff, CEO of Salesforce and a San Francisco native who has long urged comity between the techies and the city, has taken to calling his hometown a “train wreck”.

For Zoe, the newfound financial security from working in tech does not counterbalance a constant sense of being unsafe in the city. She now earns three to four times more than when she was a “starving artist”, but she says she is terrified to walk at night. She no longer rides scooters and says she feels “triggered” when she sees them around the city. She takes Ubers everywhere after dark and asks drivers to watch to make sure she gets inside her apartment building. 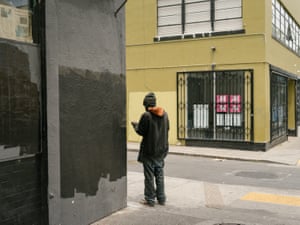 “Mark Zuckerberg lives nearby, but our corner is the main prostitution corner in the city,” she said of the Mission District apartment she shares with her boyfriend. “There’s condoms and syringes. It’s absolutely crazy with how much we pay for rent … It’s tough, because we work in tech, but we ask ourselves every day if we should move.”

It’s a striking contrast from just five years ago, when tech workers showed up in force at San Francisco City Hall to declare their love and respect for a city that was not exactly loving them back. “I am so proud to live in San Francisco and be a part of this community,” Google employees were instructed to say, as a preface to their remarks at a January 2014 hearing before the local transportation authority, according to a leaked company memo.

That hearing was one of several pivotal moments in recent San Francisco history when public officials could have used the city’s legislative or regulatory powers to force the tech industry to contribute more to public services, but chose not to. Such inflection points (which also include a controversial 2011 tax break for Twitter and a failed attempt at a “tech tax” in 2016) highlight the complicated relationship between the city government and an industry that has brought untold wealth and jobs, but has arguably failed to pay its fair share – while treating the city as a petri dish for disruptive innovations (think Uber, Airbnb and self-driving cars) by ignoring regulations.

The nominal issue in 2014 was the use of public bus stops by private charter shuttles (AKA “Google buses”) hired by tech companies to ferry employees the 45 miles south to their Silicon Valley headquarters. Activists wanted the double-decker buses banned from the streets and the companies fined for the illegal use of bus stops; the city chose to legalize the buses. 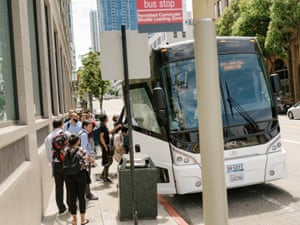 The Google Bus controversy was particularly charged because it tapped into local residents’ deep concern that San Francisco – a city with the population of Jacksonville, Florida, and the self-importance of New York – would be reduced to a bedroom community for Silicon Valley. But while the buses continue to ply their routes north and south, that particular nightmare scenario hasn’t come to pass. Instead, San Francisco has become more of a satellite campus, with South Bay stalwarts including Apple, Facebook, Google and LinkedIn competing for office space in the city proper. They’ve joined the San Francisco-native companies Twitter, Uber, and Airbnb in the cramped confines of a city of just 49 square miles, surrounded by water on three sides.

The consequences of that squeeze are well documented: the outrageous housing costs, the displacement of black and Latino families, evictions, homelessness, the loss of beloved businesses and cultural institutions. The tale of how tech destroyed the city that gave us the Summer of Love has been told so many times that in 2014, the San Francisco Chronicle produced a satirical cheat sheet for out-of-town reporters parachuting in for taste of avocado toast and class warfare. (Amid a bumper crop of new elegies to San Francisco in recent months, web publication HmmDaily updated the form with an “AI Algorithm-generated” version.)

But what’s striking about the current winter of our discontent (yes, it’s July; consider this your obligatory Mark Twain reference) is that it’s not just the archetypal “evicted Mission District visual artist” complaining that techies ruined San Francisco: it’s the techies themselves, too. 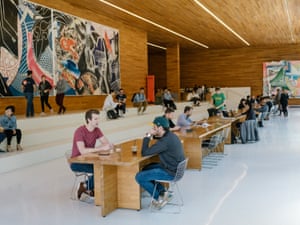 The arguments against San Francisco are manifold: it’s too expensive even for people making six-figure salaries, it’s dangerous and depressingly unequal, and, increasingly, it’s kind of boring. A frequent refrain among the more than a dozen tech workers who spoke to the Guardian for this article was that it is not so much the presence of have-nots that is ruining their experience of San Francisco, but an overabundance of haves.

“The housing crisis has a huge negative impact on quality of life because of who it excludes from living near you,” said Simon Willison, a software developer who moved to San Francisco from London five years ago. “When I visit other cities I’m always jealous of their income diversity: that people who have jobs that don’t provide a six-digit salary can afford to live and work and be happy.”

“Even though people think there is diversity in the city, there isn’t really,” said Adrianna Tan, a senior product manager at a tech startup who moved to San Francisco from Singapore. “Sure, you get people from all over the world, but the only ones who can move here now come from the same socio-economic class.”

“I feel like San Francisco is between Seattle and New York, but rather than the best of both, it’s the worst of both,” said Beth, a 24-year-old product manager who asked not to be identified by her real name. Beth moved to the city directly after graduating from Stanford to work at a major tech company, but recently transferred to Seattle. “Everyone I met was only interested in their jobs, and their jobs weren’t very interesting,” she said of her time in San Francisco. “I get it, you’re a developer for Uber, I’ve met a million of you.” 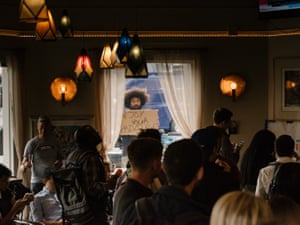 One aspect of that homogeneity is that when everyone around you is either rich or destitute, being rich doesn’t feel that rich.

“Unless you’re here to hit the IPO jackpot, you’ll always be middle-class,” said Chris, a former Apple manager who recently decided to leave San Francisco for Texas and spoke on condition of anonymity. “Tech salaries allow you to get by for now, but there’s no future for anyone under 40 in this city who’s not rich.”

Chris and his partner’s combined annual income places them comfortably in the top 1% of earners in the US – but not in San Francisco, which recently achieved the dubious distinction of having the most billionaires per capita in the world. He said that the “cost/benefit perspective” on San Francisco was no longer working for him.

“It’s just not sustainable for a couple to live here,” he said. “A million-plus for a home with $300,000 down? Then when we have kids, $30,000 a year for private school? Who can afford that even making $300,000 a year? … There’s hundreds of other places in the country with the same restaurant culture or at least on par that cost half as much.”

Chris also complained about the “property crime, unchecked homeless and drug issues” plaguing the city, noting that he had recently witnessed a man smoking crack cocaine in broad daylight in the middle of the famously twisty Lombard street. “You don’t see people smoking crack brazenly in public on Melrose in LA or in Times Square, NYC, but here the cops just shrug.”

The haves and have-nots: four cities in crisis

Figuring out how to exist in a city with so much human misery clearly on display is another challenge for affluent tech workers, many of whom express compassion for the poor and homeless, as well as frustration with the city’s decades of failure in providing adequate shelter and services to the homeless and mentally ill.

“It was really hard to stomach the indifference that I witnessed from folks who’d been living in San Francisco for a while, simply stepping over the slumped bodies of people who lived outside or just cold ignoring people asking for money,” said Jessica Jin, who moved to San Francisco from Austin, Texas, to work for a tech startup, of her first impressions of the city. “I wondered how long it would take me to also become numb to it all.” 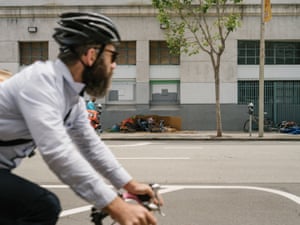 Badrul Farooqi, a startup worker, said that he had been surprised to experience echoes of the constant fear of crime and violence he was exposed to growing up in Detroit while living in San Francisco. “The entire purpose of going to school and working hard was to escape this kind of environment,” he said.

And while Farooqi acknowledged that San Francisco was much better off than the Detroit of his childhood, he argued that in some ways it was worse because the misery seems so unnecessary. “San Francisco is not Detroit,” he said. “Detroit was always poor … San Francisco has money! There’s so much money in this city.”

Sweden Turns Itself Into the World's Largest Open-air Bar