Sprouting like malignant glass tumours across the historical centre of Tbilisi, Georgia, the trophy buildings of the country’s former president Mikheil Saakashvili are hard to miss. There is the heap of white “petals” forming the roof of his public service hall, which looks like someone spilt a bowl of prawn crackers over a pile of glass boxes. A little downriver stands the wavy roof of his Bridge of Peace, locally nicknamed the “Always Ultra” for its unfortunate resemblance to a discarded sanitary towel. Nearby sit the conjoined tubes of his concert hall and exhibition centre, left unfinished and abandoned, their chubby legs spread akimbo towards the old town. It is a surreal scene, a tragic parody of vanity projects gone wrong, all watched over by the presidential palace, an illiterate neoclassical pile crowned with a great glass egg.

“For nine years we had a president who was very interested in architecture,” says local architect and planner Irakli Zhvania, who leads “ugly walks” around the city highlighting the catastrophic results of corrupt deals, destroyed heritage and the privatisation of swaths of public parks. “It was a disaster.” 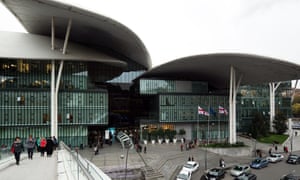 The carnage wrought on Tbilisi’s historical centre since the breakup of the Soviet Union in the 1990s, and the influx of investment in the 2000s, has been the spur behind the launch of the recent Tbilisi Architecture Biennial.

“There has been very little discussion about architecture and urban development in Georgian society,” says Tinatin Gurgenidze, co-founder of the biennial. “People are starting to wake up to the fact that their environment is being destroyed, but there is no forum for discussing an alternative way forward.”

Co-curator Otar Nemsadze used to work in the urban planning department of Tbilisi city hall and is now a private consultant for the accountancy firm PwC, so he has seen how the machine operates from both sides. “We wanted to stir up public discourse about the future of the city,” he says. “If we help to kindle a fire from below, then change might finally happen.”

Architecture is not something that has been ignored by Georgia’s successive governing regimes. Far from it. Saakashvili, a neoliberal moderniser who ruled until 2013, was a known lover of contemporary design, although the scope of his tastes was somewhat limited. The aforementioned structures were all designed by Italian poundshop starchitects Massimiliano Fuksas and Michele de Lucchi, whose fondness for gratuitous form-making was matched only by the president’s zeal to get their schemes built as quickly as possible. He also commissioned German blobitecture maestro Jürgen Mayer H to build a slew of undulating follies across the country, many of which remain unfinished.

“Saakashvili behaved like a king, just picking his favourites with no competition or discussion,” says Zhvania. “He dismissed any opposition voices as retrogrades, standing in the way of modernisation.”

The former president may now be living in exile in the Netherlands, wanted on multiple criminal charges back home, but his physical legacy is still very much felt – and others have eagerly picked up where he left off. 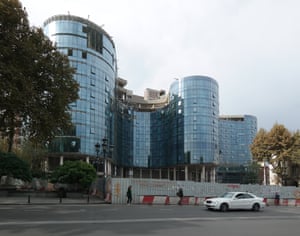 The view from Tbilisi’s central Freedom Square used to be a striking prospect, with the council assembly and other 19th-century buildings framed by a dramatic backdrop of bare mountains. The dark glass hulk of an Ibis hotel now looms behind the assembly, while the hillside has been adorned with a jumbled complex of metal sheds and glass cylinders, topped with a flying saucer helipad. Nicknamed the “glassle”, it is the Bond villain residence of the former prime minister Bidzina Ivanishvili, Georgia’s richest man. It is a £30m palace designed by the Japanese architect Shin Takamatsu, complete with a private zoo and a banqueting hall in a rotating silver orb suspended above a swimming pool, its walls decorated with copies from Ivanishvili’s $1bn art collection (he keeps the originals in a vault in London).

Ivanishvili bankrolled the Georgian Dream coalition, which defeated Saakashvili’s party in the 2012 parliamentary elections. Since then he has been widely regarded as the most powerful person in the country’s politics, said to use his vast wealth to exert influence behind the scenes – and make his architectural mark on the capital.

Not content with having his own sprawling mansion, he initiated the Panorama Tbilisi, a project of pharaonic proportions that includes a gargantuan luxury hotel, conference centre and golf course on another nearby hilltop, which will be connected to branches of the complex at other sites in the city by a series of cable cars. One of his bulbous glass blocks is already under construction at Freedom Square, built with the clumsy indifference to its surroundings you might expect. 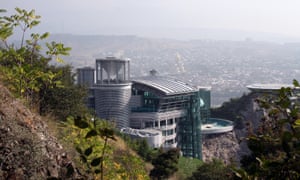 The Panorama has been described as the largest real estate development in Georgia’s history, and it is also one of the most controversial. Built on a site of protected natural landscape overlooking the city’s botanic gardens, there are questions over its legality, the transparency of procurement and permissions, and the impact of the project on the environment. Regular protests have been held since it was announced, at which activists have been arrested, including a then member of the city assembly, Aleko Elisashvili, but the bulldozers and cranes proceed unabated. The huge stack of concrete terraces is now evident from all around town, like a fortress hovering menacingly above the city.

Joseph Alexander Smith, a Briton who has lived in Tbilisi for the last six years, was driven by what he witnessed to stand for local election last year on a platform of environmental activism, campaigning against chronic traffic problems, pollution and the unabated development that has blighted much of the city. “We have lost one of the city’s oldest streets, Mirza Shafi,” he says, “and now developers are hand-in-glove with politicians, intent on destroying everything that is left. Everyone has a right to air, not just the right to breath clean air, but to look out of their window and not be confronted by the concrete wall of a new illegal building.”

He says things are beginning to change – construction permits are now available to view online, and people call the city hall inspectorate when they see something being demolished illegally – but that many contractors still begin digging then apply for permission afterwards. 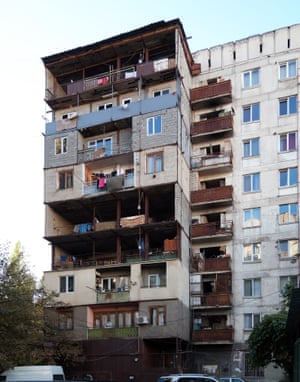 Gurgenidze agrees. “People are only starting to protest now because these catastrophic projects are so visible everywhere,” she says. “They are changing the landscape, reshaping our mountains and destroying our heritage, but it is not clear who these seven-star hotel complexes are for.”

She and her co-curators have decided to focus their efforts at the opposite end of the scale, shining a spotlight on the conditions in which ordinary citizens are forced to live, and how a different kind of spatial ingenuity comes from below. Rather than staging their events in the centre of the city, they have chosen Gldani, a Soviet-era suburb of crumbling concrete apartment blocks half an hour’s metro ride north, as the site for their inaugural exhibition and events. Thhere the stark reality of how the majority of Georgians make-do and mend, while the political elite erect their towers, is plain to see.

Gldani is a place where “kamikaze loggias” of self-built extensions stick out precariously from the side of 1960s concrete blocks, where balconies have been bricked up in the desperate need for more space, where tiny garages have been taken over as bakeries, wineries and hair salons, where a half-built Soviet swimming pool has been occupied with makeshift homes. Subject to a large influx of refugees after the Abkhazia war in the 1990s, it is a place bursting at the seams, transformed by a whole host of ad hoc, hastily built additions and adaptations, a kind of informal urbanism the curators have taken as their focus for the biennial. “To deepen our understanding of people’s needs,” they write, “it is essential to study the ideas behind the self-made structures, informal housing and urban responses that shape the current urban landscape of Tbilisi.” 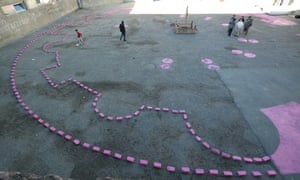 Their exhibitions and installations offer the usual mixed bag of such shoestring-budget events, with much of the work on show being indistinguishable from the self-built shacks of Gldani itself, but there are some powerful pieces amid the chaos.

An anonymous group called Anti-Material-Architecture has built what it calls an “informal monument”, a long colonnade of mangled scaffolding poles bound together with wire that extends through a courtyard, over a couple of buildings and across a bridge. “The locals think it’s garbage,” says one member of the group, from Basel. “But if you can make such a big structure out of garbage, then maybe it’s not garbage any more.” It might have been provocative in a different setting (marching over Ivanishvili’s lair, perhaps?), but, in such impoverished surroundings, it feels uncomfortably like fetishising trash.

The Viennese architects Adrian Judt and Helene Schauer were more pragmatic in their approach, although their work didn’t last long. Their installation, To Be Constructed, took the form of a pile of building materials placed on a blue platform, free for anyone to take for their own use. Which the enthusiastic self-builders of Gldani did, with relish. The breeze blocks, wallpaper and tubs of paint were gone in 30 minutes. 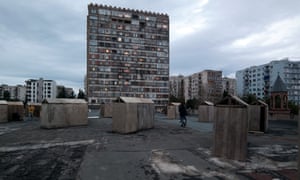 The Venetian group Babau Bureau, meanwhile, realised that one of the district’s courtyards was about the same size as the mausoleum of Santa Costanza in Rome, so they painted the footprint of the building in bright pink paint on the floor. It is one of the simplest of the interventions, but it has had one of the most profound effects: children have already devised new games involving hopping between the columns, and the cracked tarmac yard has been elevated into something special. “We wanted to show that the basic signs of a building have the power to define occupation and use,” says the architect Stefano Tornieri, “even when it is not built.”

A former secret service building has been taken over as the main venue for the indoor exhibition, where student work focusing on informal architecture from a number of international schools is shown alongside conceptual work by artists and architects. The highlight is the oldest piece on show, dug out from the archive: the original hand-coloured drawings of Gldani’s covered bridge connecting a pair of tower blocks, designed by the suburb’s architect, Temur Botchorishvili. It is a pastel Ponte Vecchio wrought with Soviet concrete muscle, now home to a boxing gym and a hotel. It has been occupied by further interventions for the biennial, including a photo exhibition and a series of gnomic wooden huts on the roof by famed Russian “paper architect” Alexander Brodsky (which rather make you wish he had stuck to drawing). 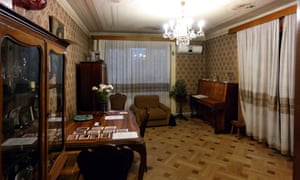 There are many other curious things to be found in the backstreets and slung across bridges, but the installations generally pale in comparison to the spirit of the place itself, and the imagination with which people have adapted it. It is telling that the most popular part of the biennial at the opening was Block 76, a chance to look inside a number of regular families’ apartments in Gldani, complete with their time-warp Soviet interiors and icon-studded hallway shrines. As the American architect Jesse Vogler, who teaches in Tbilisi, puts it: “The curators have already succeeded, simply by getting people to come out to Gldani and look around. It is way outside of most Tbilisians’ regular comfort zones.”

It is a bold step in the right direction. With a little less conceptual art and a little more critical focus on the city’s urgent problems in forthcoming editions, the biennial could grow into a powerful tool for airing debate and effecting change, providing a much-needed brake on Tbilisi’s untrammelled steamroller of development.