Blowing on horns, waving black flags and playing blaring sirens and loud music through a speaker system, protesters outside a WeWork branch in Shoreditch, London, demanded the attention of those going in and out last week.

The deafening demonstration – which called for four cleaners who have lost their jobs at WeWork to be reinstated – made for a stark contrast with the cool, modern environment inside, with its standup-friendly furniture, “writable” walls and endless stream of freshly roasted coffee.

The protest highlighted a problem that has become widespread: many modern multinationals in cities across the globe are now staffed by what amounts to a two-tier workforce. Employees enjoy protected employment advantages, while the outsourced people who keep the workspaces running – who clean them and keep them safe – often have more precarious roles with inferior terms and conditions.

The office rental company WeWork has grown into an empire, developing a reputation for trendy workspaces where entrepreneurs and firms can collaborate over craft beers or coffee in light airy lounges. It operates offices in around 100 cities and has around 527,000 members and 528 locations. (Guardian US leases space from WeWork.) 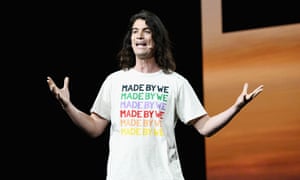 In recent weeks, however, its parent company has been beset with problems, scrapping plans for a $20bn IPO, and WeWork co-founder Adam Neumann announced he was stepping down as chief executive.

The brand sets great store by the concept of community, but that doesn’t necessarily include the cleaners, who, at least in the UK, are all outsourced workers.

The dispute in London centres on four cleaners who were employed by CCM Facilities, which provides cleaning services at WeWork’s London offices. (There was a fifth dismissed cleaner involved, but he appears to have been rehired by CCM.)

The protest – as with one a week earlier at No 1 Poultry near Bank – was organised by the Cleaners and Allied Independent Workers Union (CAIWU), which represents more than 1,000 workers, mainly in London’s cleaning industry.

The union claims the cleaners were unfairly dismissed by CCM shortly after WeWork said it no longer wanted them on its premises. It claims there was insufficient evidence to prove allegations of misconduct made against the cleaners.

Alberto Durango, CAIWU general secretary, said: “Each of the [four] cases was so-called third-party pressure, which is the client – in this case WeWork – saying we don’t want these people here. They’re the clients and they requested the removal of these guys. They have the power to say to CCM to reinstate these workers. For a cleaner, they really need their job.” 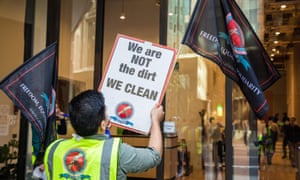 While the client has the right to say they no longer want a person on its premises, “they shouldn’t be as arrogant [as] to say ‘I don’t want this person here’”, said Durango.

Three of the dismissed workers were originally from Colombia and one from Ecuador. The details of their cases vary.

One, Julian Ortiz, says he asked a member of security at the Paddington branch of WeWork where he worked if he could borrow a projector, and that they agreed. When the company told him the staff member didn’t have the authority to agree to that, he brought the projector back promptly, he says. He was suspended by CCM a few days later, he says. He’s now found part-time work, but misses his old job: “I felt so happy when I was working with WeWork.”

Another, Jorge Montoya, says his daughter was working at the same WeWork branch that he was, so WeWork requested he be moved to another one. He claims CCM offered him work at another site but later dismissed him.

A third worker, who doesn’t speak fluent English, was cleaning a staircase when someone approached the wet floor, said Durango. “In broken English he says ‘don’t pass’” and the person took offence, the CAIWU general secretary said. A fourth cleaner was accused of making a racist remark to a member of staff, a claim he denies.

While outsourcing isn’t a new phenomenon, the scale of it is – it’s one of the biggest growth industries in the past decade. Cleaners, security guards and catering staff at multinational companies, universities, hospitals and other big organisations (including the Guardian) are often employed by other companies.

The two-tier system means the balance of power at outsourcing firms is firmly in favour of the client: they won’t want to lose a valuable customer. Client companies using outsourced workers often insist in contracts that they retain the right to request a worker be removed, said Molly De Dios of the United Voices of the World union, a large proportion of whose members work in the cleaning sector. And the clients use that right. 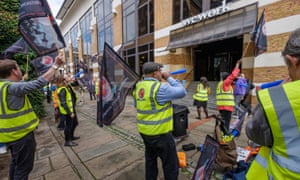 While there will be instances when a company has genuine concerns about someone’s professional performance or conduct, sometimes the reasons for the removal appear more suspect, she said. The union has heard allegations about cleaning companies colluding with clients when they want to get rid of an outsourced worker for a spurious reason without repercussions.

In some cases there are claims of false accusations, or workers being dismissed simply because someone took a dislike to them. “The cleaning sector, and the service sector more generally, is a massive migrant labour workforce, and language can be used to manipulate,” said De Dios.

She added: “The big issue of outsourcing is workers are completely unprotected against it. Clients often have written into a contract that they have the right to request the removal from site of any worker without having to provide explanations, so the only case that an employer would be liable in that event would be if you could prove that they requested their removal on grounds of discrimination.”

United Voices of the World, which is currently involved in seven live disputes in the UK, fights to bring cleaners in-house. “Outsourcing is a complete farce, it shouldn’t exist at all – it’s terrible,” De Dios said. ‘“It leaves workers with fewer rights and it means the clients who are essentially the employer (because the cleaners are cleaning their site) aren’t legally responsible or liable for anything.”

Outsourced workers are treated as a disposable and inferior workforce, said De Dios; she gave the example of a cleaner at a London hospital who was told she couldn’t use the staff room and to eat her lunch on the stairs.

When a client asks for the removal of a worker, the employer should investigate the basis of the objection and offer alternative jobs, said De Dios. She said that in some instances they are not properly investigated and the alternative jobs offered involve a long commute, or fewer hours, or the employee isn’t given long enough to make a decision.

In the case of the four WeWork cleaners, CCM says two were offered alternative employment that they turned down. However, the CAIWU union claims the workers asked for the details to be sent in writing so they could consider them properly, but were instead told they had declined them.

A CCM Facilities spokesperson said in a statement: “CCM Facilities Limited take matters of this nature very seriously and we have fully investigated these concerns about work place performance and misconduct.

“Of the four individuals, two were offered alternative employment, which was declined in both cases. The two other cases resulted in dismissals, which were both upheld at appeal. To CCM Facilities Ltd[’s] knowledge, none of these individuals have filed employment tribunal cases for unfair dismissal or any other reasons.”

Why is it so hard for airlines to seat families together?