Home » Destinations » Turn Your Long Layover into an Adventure

Long layovers are no fun, whether scheduled or unscheduled.

If you don’t belong to an airline club, passing hour after hour in a crowded, noisy, and uncomfortable terminal can be the stuff nightmares are made of. And many times, these extended layovers occur when connecting internationally. However, when booking your trip, check the possible connection times. From my experience, choosing one that’s closer to 12 hours is preferable to a 5- or 6-hour connection.

One time, while traveling to Africa, my friend and I had to connect in Paris, where the layover was either 4 or 13 hours. Four hours is a long time to be cooling your heels in Charles de Gaulle, but 13 hours opened up the magical opportunity of spending a free day in Paris! It only took a short conversation to convince my friend to go the 13-hour route.

We stowed our carry-ons in a locker at the airport, exited through customs like anyone headed to Paris and jumped on the train into the city. We stopped at one of the endless bakeries, had an easy breakfast, then walked all over the city (occasionally grabbing the subway for an assist). Neither of us had been to Paris previously, so we saw all the basics: the Eiffel Tower, the Notre-Dame Cathedral, the Champs Elysees, and even made it to the top of the Arc de Triomphe at sunset, where we watched the city lights come on and saw Eiffel’s hourly “sparkle show.” It was a memorable day, and we ate all three meals in little cafes. Better yet, all the walking and fresh air had exhausted us (in a good way), so we slept soundly on our next overnight flight.

Not much later, I was coming back solo from Asia to my home in Ohio, and the cheapest fare had me routing through Hong Kong. Here, the option was roughly 5 hours or a full 24 hours. Fondly recalling the Paris experience, and being a fan of the incredible architecture in Hong Kong, I chose the full-day layover.

I grabbed a cheap hotel in Kowloon for one night for less than $150 and set out to wander the city on my own. I took the Star Ferry to the city center, I gazed in awe at I.M. Pei’s Bank of China Tower, a favorite, and many other otherworldly skyscrapers. I took the Peak Tram to the top of Victoria Peak, I went shopping in the markets.

Overall, $200 or $250 in total gave me my first experience in Hong Kong, which turned out to be one of my favorite cities in the world. If not for this little extra adventure, it might have taken me years or decades to give the city a try. And just this week, my partner and I did the long layover thing in Munich. We had a 10-hour layover in the Bavarian city on route to Cape Town. I’d been to the city briefly in the past, but he had only been to northern Germany, so it was a nice chance to discover some things together.

Luckily, we had access to the Lufthansa lounge in Munich, so we stopped there when we landed in the morning and used the shower facilities to refresh, and then had a relaxing breakfast. We took the convenient S-8 subway line down to Marienplatz, where we arrived just in time for the famous Glockenspiel show, where the square’s clock comes to life — and more than 30 mechanized figurines for a short show. 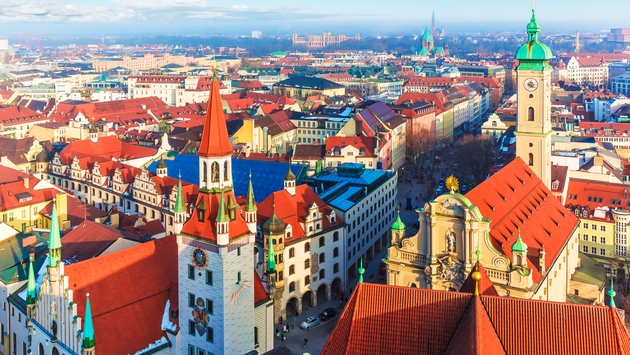 We also checked out the many churches, including St. Peter’s and the Frauenkirche. We walked the many downtown pedestrian malls, although our timing was off on this trip. We were a couple of weeks early for the city’s famed Christmas markets and it was a Sunday, so most all of the shops were closed.

Still, we made the most of the brilliantly sunny day and got in a lot of walking. We explored the city’s massive English Garden, a 900-acre wonderland where you’ll see locals walking, playing with their dogs, sunning themselves, and even surfing! Yes, you read that right. I wasn’t sure about that when I first heard about it, but after a half hour strolling in the park, we saw a young woman in a wetsuit and carrying a surfboard walking near us. We decided to follow and soon came upon Eisbach at Haus der Kunst, where nearly a dozen young people were surfing the river.

We also fit in a nice German lunch at a beer hall, where we stuffed ourselves with Swabian noodles, meatballs, pretzels and more. Before we knew it, we were down to four hours until takeoff, so we walked to the nearest subway station, made our way through security and customs in record time, and were pleasantly tired — an ideal situation for the upcoming 11-hour flight. Even better, we had an extra day of memories built in, for next to nothing.