Home » Destinations » The future of Durban: is this South Africa’s most inclusive public space?

It’s an early start on Durban’s beachfront Golden Mile. By 6am the surfers have arrived, followed by the runners and their dogs, then executives-cum-cyclists, speed walkers and yoga instructors. By 7am the cafes are open for breakfast and children, on holiday from inland schools, are already in the water.

Where fellow oceanside metropolis Cape Town has marketed itself to the world, Durban has positioned itself as South Africa’s playground. Beachfront theme parks and twirling public waterslides attract families from around the country, and all walks of life. This accessibility and affordability have made this eight-kilometre strip arguably one of South Africa’s most inclusive public spaces.

Beyond the narrow strip of beach and promenade, though, South Africa’s third largest city struggles with the same problems as the rest of the country: 25 years after the fall of apartheid the city which was divided by race remains divided by economics.

But it is setting out to address those issues with several new models of growth – the waterfront, a privately funded development of restaurants and retail along Florida Road, and the redesign of the traditional market at Warwick Triangle.

Each embodies a different theory of how Durban can best become a more inclusive city – and each has its defenders and detractors. 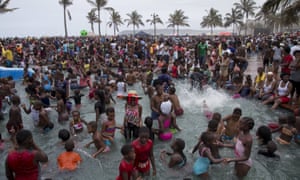 “Clearly the beach in Durban was seen as the playground for white South Africans,” says former city manager Michael Sutcliffe. As a member of the United Democratic Front, Sutcliffe led protests to integrate Durban’s beaches in the late 1980s.

What is South African cities week?

Twenty-five years after the fall of the brutal apartheid regime, South Africa’s cities remain hugely divided, both economically and racially. This week Guardian Cities explores the incredible changes taking place, the challenges faced and the projects that bring hope.

Author Niq Mhlongo pens a love letter to the “other Soweto”, one that visitors to gentrified Vilakazi Street never see. We hear from Port Elizabeth, where one architect is using recycled materials to transform his city, and Durban, where a surf school is changing the lives of vulnerable children. We explore the deadly underground world of zama zama gold miners operating illegally under the city of Johannesburg, visit the Afrikaner-only town of Orania and publish an extraordinary photo essay by Magnum nominee Lindokuhle Sobekwa, who documents life in a formerly white-dominated area where his mother once worked as a domestic helper.

But when the end of apartheid saw white flight from the city centre to the northern suburbs, the beach fell on hard times. Prime real estate overlooking the port was abandoned and illegally occupied, the city’s pastel-coloured art-deco buildings became derelict as landlords neglected them and bylaws were trampled on. The beach, particularly popular South Beach, became a crime hotspot and few dared to be caught there before sunrise or after dark.

The real turnaround came in the run-up to the 2010 World Cup, when as a host city Durban had to rethink its image. Along with the repaved promenade and formalised flea markets, came the Moses Mabhida stadium, within walking distance of the beachfront.

Durban officials were accused of exacerbating inequality by prioritising entertainment over basic necessities like running water and safe housing in the townships miles away from the tourist hotspots. Still, despite being briefly embroiled in a spending scandal and with a “Mike-is-right” style of leadership that antagonised some fellow councillors, Sutcliffe is credited with revitalising the promenade. 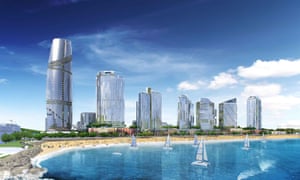 Except for one sign that eluded post-apartheid painters, Durban’s beachfront now resembles an idyllic melting pot of South African cultures. On Christmas Day and New Year’s Day, in particular, the beach is so crowded with people who a generation ago were not allowed on the sand that it could be read as an annual defiance to the country’s old laws.

The project is still ongoing. A decade ago, the Point Road area near Durban’s docks was known for derelict buildings and illegal prostitution. Now, artists impressions of what the area could look like in the next 10 years imagine glistening skyscrapers reflecting the Indian Ocean, alongside a mixed development of luxury apartments, retail, business zones and tourist hotspots.

The development will link the promenade to the port, extending the Golden Mile into a project that hopes to rival Cape Town’s V&A Waterfront. A joint venture between the eThekwini Municipality and Malaysian developers UEM Sunrise, the project is reported to cost R35bn (£1.8bn) and will be overseen by the national government, in part to avoid corruption scandals that have overshadowed Durban.

As a model for inclusivity, it has one major downside: the beaches along the northern suburbs are now an enclave for middle class and wealthier Durbanites, particularly moneyed black tourists who prefer the warmer Indian Ocean to Cape Town’s icy Atlantic. What’s more, despite its plans for mixed-income development, the new Point Road project looks likely to exclude the largely black, working class communities who have kept Durban’s city centre alive. 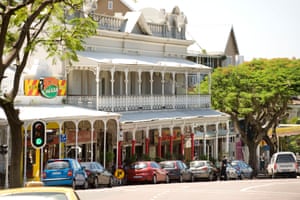 A second approach is taking place at what is arguably Durban’s most successful regeneration project, Florida Road, a trendy thoroughfare just over a mile from the beachfront. A project by London-based developer Urban Lime hopes tourists and especially locals will linger in the courtyards that mix the Victorian and Edwardian facades of this historic neighbourhood with trendy boutiques and restaurants of the so-called new South Africa.

Previously a street of churches, retirement homes and an unassuming supermarket, the Florida Road turnaround began when Urban Lime bought a parking lot, and transformed it into a retail and outdoor entertainment space. Unusual in a city traumatised by crime, the strip is designed to encourage walking, and by day a row of dessert spots welcome a family-conscious community, many of them devout Muslims. It offers mixed price options: a taco spot and Afro’s Chicken Shop, a local favourite, are affordable easy dining, with more fine-dining restaurants further along the street.

The developer works with local residents’ associations to employ a private security company that patrols the privately owned public spaces, and Urban Lime has expanded aggressively, accumulating around 200,000 sq m of retail space since 2014 and spending R1.2bn.

Recognising the inner-city’s cash-driven economy, Urban Lime has moved into the city centre, where it has subdivided retail space to allow small traders to rent for as little as R1,500 a month for several square metres. They’ve taken over the iconic Durban Club Chambers, a downtown high-rise that houses the city’s legal fraternity and was once the offices of one of the country’s first black lawyers and founding member of the ANC Pixley ka Isaka Seme. They plan to turn part of the block into a pedestrian zone in an attempt to coax the advocates who work in the city to spend more time in central Durban. 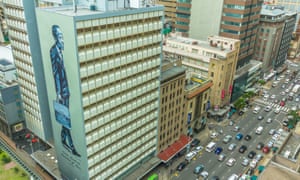 The company’s managing director, Nad Shahid, explains a grand plan of 16 nodes that will reconnect the suburbs to the inner-city and eventually back to the beach. Centred on a refurbished building or district, these nodes revitalise the area block by block with small to medium-sized retail, restaurants and office space, bringing traffic back to abandoned spaces and helping Durban combine the commercial drive of Johannesburg with the oceanside lifestyle of Cape Town.

But, this sort of development is also synonymous with gentrification around the world. On Florida Road, it has meant higher rents and some angry tenants, most notably the owner of the restaurant Spiga, Marco Santoniccolo, who closed down his family eatery after nearly 17 years on Florida Road after rents climbed. Since reopening around the corner on Innes road, though, Santoniccolo has made peace with the changes and even welcomes the developments. 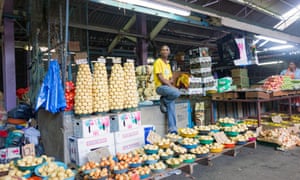 Durban city centre may have been abandoned by some landlords and starved of services in the 1990s and 2000s but is neither a ghost town nor a crime-ridden chaos. It is home to many working-class black South Africans who have moved from townships and villages around the province of KwaZulu-Natal.

Built over a transit hub that links minibus taxis and trains, Warwick Market offers everything from fresh vegetables to dried medicinal herbs. Among rows of wild spinach and sweet potatoes is a butchery that sells fresh offal and fish. There are stalls specialising in the uniform of the Zionist Christian Church, and others that will type a CV for R7. One sells DVDs of popular mbaqanga music artists; a herbalist offers a mixture that will “help you find love”.

It represents a third option: a more natural, bottom-up development that embraces all Durbanites, not just those who can afford to eat in the fancier restaurants of Florida Road or tourists paying for expensive beachfront hotels. The market largely caters to the residents who were willing to put up with Durban’s inner-city decay because they had no better option.

Warwick market’s survival is testament to a moment of euphoria in post-apartheid South Africa in which officials, corporates and informal traders were willing to reconfigure the segregated city in the 1990s, explains Richard Dobson of Asiye eTafuleni (meaning ‘let’s go to the table’), a non-profit that represents the voices of informal traders in urban planning.

Why are South African cities still so segregated 25 years after apartheid? | Justice Malala

This model was put to the test during Durban’s revamp as a so-called “world class city” fit for the World Cup, when the historic market faced demolition to make space for a shopping mall. It was ultimately saved by mass demonstrations, when thousands of vendors rallied together, forcing the city to rethink its development plan and improve the junction for people who already lived there.

Dobson says the market functions well, with a turnover in the order of millions of pounds. It is vendors who keep the area safe and clean, not police or city workers.

In many ways Warwick represents the kind of community buy-in and local participation that is only now beginning to occur on the beachfront, and has yet to occur in the city that lies right behind it. So, will Durban ever become a fully inclusive city?

“You don’t do it by thinking that by putting black people living next to white people suddenly the white people are going to change,” says Sutcliffe, the former city manager. “That’s not going to happen. And it hasn’t happened. I think that all the evidence shows that kind of integration will take generations.”

How to Celebrate the Lunar New Year, According to Hong Kong Locals

Discovering the hidden jewels of the Dominican Republic

Will this Disney newbie be spellbound by the Magic Kingdom?