Last year, Guardian Cities reported an exclusive story: that a new housing development in London had erected a wall to prevent children in the social housing section from using the communal playground.

Within hours of the story being published, news reporters from across the UK turned up on the doorstep of the Baylis Old School development in Lambeth. All the major political parties condemned this “segregated playground”, and a few days later the developer, Henley Homes, backed down. Workers came in to tear down the wall.

The story had not just an immediate impact but an ongoing one – and not just politically but also among architects, urban planners and developers. At Guardian Cities, we were contacted by other people living on segregated developments. Many of those have since been desegregated. The mayor of London, Sadiq Khan, responded by outlawing segregated playgrounds in the city – and then the Conservative housing minister, James Brokenshire, went further, saying he wanted an end to all forms of segregated play across the UK.

None of this would have come to light if not for the women on the estate, who had been fighting for their children’s right to play. Despite the Baylis Old School development being advertised as “family-friendly”, many of their neighbours considered play to be a noisy intrusion. When mothers living in the private apartments discovered their social-housing neighbours weren’t allowed to join them in the playground – let alone encourage their kids to play – they were furious.

“Our industry should be grateful that these women stepped up and drew attention to what was happening,” said architect Dinah Bornat, an expert on child-friendly design who has given talks on the segregated playgrounds scandal to architects and planners.

“The story now comes up frequently,” she added. “People recognise it now as something to avoid.”

But while developers might be steering clear of something as obviously and literally offensive as walls in playgrounds, it’s clear that our cities are steadily being divided in many other ways. 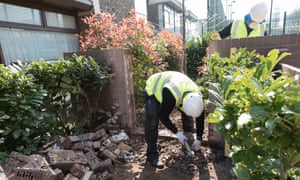 Private developers now have almost total control over the building of affordable homes in the UK. That’s affordable in all senses: truly affordable homes for social rent, as well as “shared ownership” homes that remain out of reach to most buyers.

These developers, and the housing associations that manage the affordable homes, invariably point the finger of blame at one culprit: service charges. If you have a gym and a cinema and a rooftop lounge, they argue, you should pay more. (That thinking is now regularly applied to even the more expensive shared-ownership homes: as the Guardian reported last year, those residents are being locked out of communal facilities, too.)

But the families who argued for access to shared gardens say the service charge on a small garden or play area should not be used to keep children out.

The extra cost added to a service charge for a playground is often minuscule. On the Baylis Old School site, the social housing residents who now share the space they have discovered that it doesn’t cost them much at all. The same has proved true on other segregated developments. 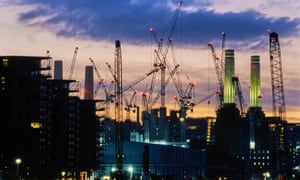 The London Plan might call for mixed communities, but the reality is that many developers want separate blocks, and actively pursue them, so that they can sell “luxury” to higher-end buyers. They argue that they need to maximise profit in order to pay for the affordable homes they are required to build as part of the planning agreement.

Housing associations, to their credit, would love to have more freedom to build homes outside of this model. And some councils are indeed building their own homes where they get the chance.

Because when homes become more important as expensive assets than as places to live, and when security is prioritised over community, children – who might want to use communal play spaces for, say, playing – are seen as an unwelcome intrusion.

One segregated garden we reported on was the London Square development in Streatham. The garden has since been opened up to all residents, but a woman living there said she still feels unwelcome.

“I took my daughter out for a picnic with her friends on her birthday, and a man from the private side came up and started filming us with his camera,” she said. “He said, ‘Just making sure you don’t do anything wrong.’”

This incident is a painful example of how ordinary families are sometimes unwelcome on luxury-style developments.

The women on the Baylis Old School development achieved something special. They stood up for children, and put a tool in the hands of those who are fighting segregation.

Jerry Flynn, a social housing campaigner, said the women’s achievement has given people across Britain a way to hold developers and local authorities to account. “People now stand up in planning meetings and ask whether the play spaces and gardens will be open to everyone – it’s always asked now. They know they can’t get away with it.”

The London mayor himself is asking, too. Last summer, Khan wrote to Wandsworth Council describing the regeneration of the Alton Estate in the city’s south-west as “segregated” because it involves moving social housing residents to the edge of the site. The developers have now submitted revised plans. 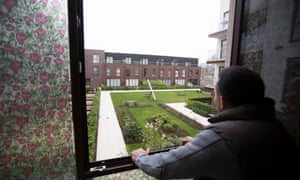 However, though direct segregation may now be less likely, expensive concierges, entrances, gates and locks are becoming more regular features of new housing. All of these are barriers to children, too, to how they play. Children are canaries in our coal mine: when they find it hard to play freely, it means we are building division into our cities.

Nor is the segregation scandal just about wealth versus poverty. At the Baylis Old School complex, women on both sides of the wall had a common aim – for their children to play together. They told me very firmly: don’t make this about rich against poor.

The case for … never demolishing another building

Despite knowing that the successful campaign alongside her neighbours has sent ripples through the housing industry, Louise Whitley is still worried about what she sees around her.

“I’m so glad we were able to help other people. But while a physical wall has come down, it is the mental walls that are harder to challenge,” she said.

“People still don’t see how much children’s right to play matters. I see the cranes all around us. The developments going up across south London are focused on luxury homes. I worry that these won’t be places where children will be welcome to play outside with their friends.”