Maybe the driving northern rain has washed away our sense of humour. Jack Hurley’s “Rubbish Seaside”, a collection of quasi-satirical railway posters, has been billed a “backhanded love letter”. To our eyes, as teachers who work with some of the country’s most disadvantaged young people, it’s “backhanded” in much the same way that an emotionally abusive boyfriend calls you fat, but it’s you who can’t take a joke.

The series did feature some nuanced and humorous social criticism. Hurley’s depiction of Manchester thoughtfully contrasted the gold-plated skyline with street-level poverty. However, his treatment of towns such as Blackpool betrayed a regrettable lack of creativity and empathy. In a local authority that has the worst public health demographics in the UK – due to savage cuts from Westminster – it seems puerile to poke fun at the “matching coldsores” sported by the “small army of scallies” Hurley sneeringly refers to in his note on the piece. Every good comedian knows the rule about punching up rather than down. Maybe an educative trip to Blackpool’s Comedy Carpet is in order.

You don’t get away with it by being from “the north” either. It’s not a lumpen mass; you wouldn’t allow someone from Chelsea to speak on behalf of a council estate in Tower Hamlets, so why conflate Southport and Scarborough?

Depictions like Hurley’s are also mediated through – and consumed by – a predominantly southern, middle-class gaze. These posters were promoted in a “fun new art exhibition” in Gray’s Inn Square (“Please do pop in, browse and purchase!”). Funnily enough, we’ve yet to see them displayed in all their glory on the railings of Blackpool’s North Pier.

In 1981, the Tory minister Norman Tebbit notoriously regaled the Conservative Party conference – in Blackpool’s Winter Gardens – with the fable of his jobless father, who “got on his bike and looked for work, and kept looking till he found it”. Forty years on, northern towns are still facing the same stigmatising blame-game. 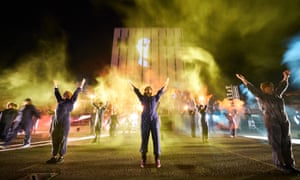 The toxic treadmill of social mobility is exposed when middle class “escapees” from poorer post-industrial and coastal towns think they have a free pass to guffaw at those forgotten by a fraudulent meritocracy. In 2017, Justine Greening, then the secretary of state for education, recalled with woe her childhood in Rotherham: “I was aiming for something better … I knew there was something better out there”. It’s as if her Yorkshire hometown were a remote planet necessitating extraterrestrial journeys to discover intelligent life.

Unless the goal of social mobility is that we all eventually move to London, we need to start taking northern towns and their potential seriously. Rather than encouraging talented young people to leave and take their ideas with them, we ought to invest in entire communities. If moving out is the only way of moving up, something’s not working. And it’s not just Norman Tebbit’s dad.

We have both taught extensively in schools in Blackpool and elsewhere. We know that children are quick to internalise disparaging media portrayals of their home towns. Their self esteem is inextricably linked to low self-worth at community level. We see this when they describe their towns as dirty and dangerous, and when they use “council house” as a slur. The constant media battering fosters shame and hopelessness; they can’t see a secure and fulfilling future close to home. These kids are told they lack aspiration, but also that there is nothing worthwhile to aspire to where they live. It pits them against their families and neighbourhoods. They can’t win.

For every shoddy stereotype in the press, we see a missed opportunity to report on the creativity kindled in response to just these lazy tropes. You might have seen, for example, the divisive Panorama documentary in which Blackburn was publicly shamed as “segregated” (or read the Guardian’s four-star review). Blackburn Museum responded with Kick Down the Barriers, a project collaborating with artists and writers to rewrite this toxic narrative. Particularly exciting is an upcoming piece by Jamie Holman and Sana Maulvi, which takes the form of a series of letters to one another exploring the development of their friendship over the years, and reflecting on the stereotypes and cliches they remember along the way. Have you heard of it? No?

The north keeps kicking. Blackpool arts programme Leftcoast commissioned Left Behind, a series of works produced in response to a miserable Financial Times article of the same name. The Manchester-based youth leadership enterprise Reclaim celebrates the diversity of the modern British working class.

Hurley’s contribution only serves to perpetuate the feeling that locals need to be embarrassed about their hometowns. Surely there are more deserving targets of his satirical aptitude. Communities will always find strength from within when they are let down by those in power. Media outlets, especially those claiming liberal credentials, have a responsibility to amplify these voices.

Rebecca Grant started her teaching career in Blackpool. She currently working on a PhD about educational disadvantage in Manchester, writing for Kick Down the Barriers in Blackburn and continues to teach in secondary schools. Charlotte Yates has worked in a number of roles in education and currently teaches English in a state secondary in the North West of England.

The authors of this article are donating their fee to Blackpool Carers’ Centre, which provides essential support for young people with caring responsibilities. Donations can be made here: https://www.justgiving.com/fundraising/rebeccacharlotte2019

Travelodge releases 100,000 rooms for £29 across UK hotels over Feb half term

The boutique hotel – for DOGS!