The founder and CEO of the Sydell Group — which creates and operates hotels brands such as NoMad, the Line and Freehand — wasn’t sold on bringing his flagship property from Manhattan to the Strip.

“I didn’t really love the idea of doing a NoMad that was in some giant building that had no relationship to the NoMad,” Zobler said.

Will Guidara, one half of the Make It Nice duo behind acclaimed New York restaurants Eleven Madison Park and NoMad Restaurant, felt the same.

“I’ve always loved Las Vegas,” he said. “I’ve always wanted to be here. The thing I’ve always struggled with is the idea that, no matter how magical the experience we create within the walls of the restaurant is, you step through the door and you’re in the midst of hundreds of slot machines.”

Last month, the NoMad opened at the Park MGM as a boutique hotel within a hotel that solves both men’s problems in elegant fashion. It stations NoMad Restaurant — Guidara and chef Daniel Humm’s Michelin-starred dining room — inside a cohesive hotel, and it anchors that hotel inside the Park MGM, a rebrand of the former Monte Carlo that the Sydell Group helped design.

In other words, Zobler didn’t just install the NoMad hotel inside some big-box resort on the Strip. He worked with MGM Resorts to build that big box together.

The result is an intimate, self-contained, 293-room property with its own lobby and high-limit casino. The NoMad Bar serves inventive cocktails and three meals a day of well-conceived casual fare, and the NoMad Restaurant will start offering dinner five nights a week this month. A NoMad Pool, coming next spring, will round out the hotel’s branded elements.

The Park MGM’s full suite of amenities, including an Eataly market arriving in December and a 5,000-seat theater that will soon play host to Lady Gaga, are accessible just through a door, but you don’t have to venture out to have a great meal or play a hand.

“You have everything you want in a Vegas experience,” said Zobler.

“People talk about Las Vegas like it’s an oasis,” Guidara added. “It’s like we were given an opportunity to build an oasis within that oasis.”

The new NoMad offers everything guests have come to expect from a NoMad Hotel, albeit with an only-in-Vegas twist.

“If you think about what NoMad is, it’s kind of this intersection between old-world glamour and a modern vibe and style,” Zobler explained. “In Vegas, very often people go for glamour, but the glamour is often not in the best of taste. We sort of ramped up the glamour side of NoMad, but I like to think we stayed on the right side of good taste.” 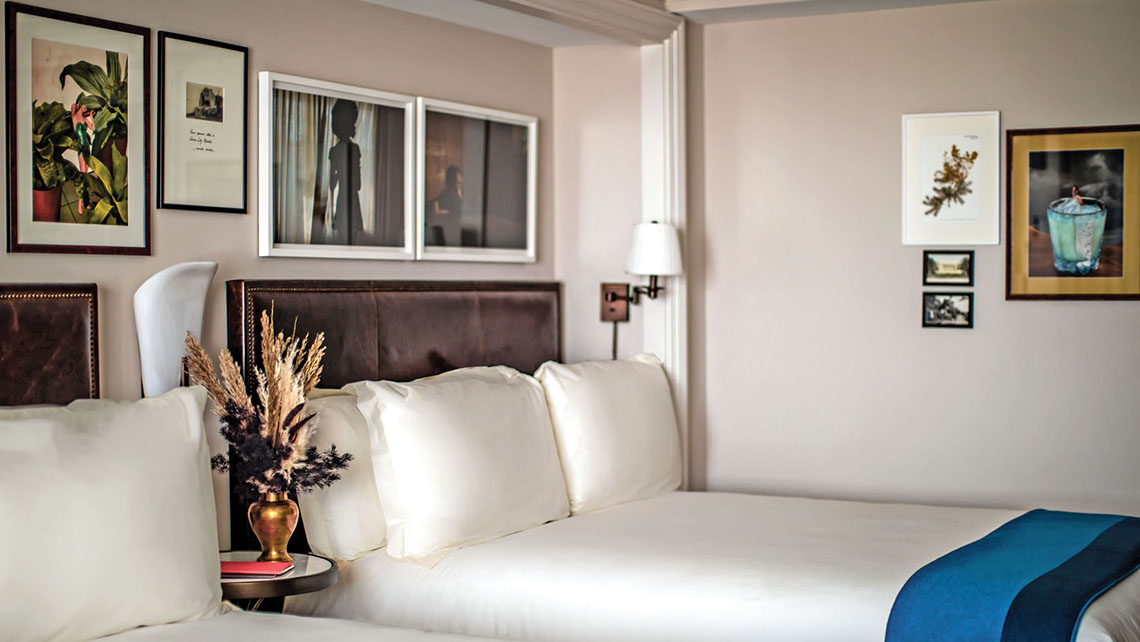 That philosophy is visible in the room product, spread over the top four floors of the Park MGM tower. Where NoMad’s locations in New York and Los Angeles might dedicate 10% of their inventory to suites, a full 40% of the NoMad Las Vegas’ room product are suites, including a number of oversize, over-the-top accommodations made for entertaining, with custom furniture, full-size billiards tables, dining rooms and lounge spaces.

“That’s really unique for NoMad,” Zobler said. “It’s the first time we’ve done anything like that.”

The rest of the guestrooms have a residential feel that’s echoed at the Park MGM, with an art and photography collection curated by design studio Be.Poles and in-room vignettes that look more like the gallery wall of an eccentric friend than standard-issue hotel prints.

“If you stay four or five or six times, you’re not going to see the same art over and over again like you do at a lot of hotels,” Zobler said.

Downstairs in the restaurant and bar, the design is also NoMad a la Vegas, European sophistication kicked up a notch.

The NoMad Restaurant is modeled after the Library space inside the NoMad New York. While the original is a glowing, two-level room lined wall to wall with books, the Las Vegas version expands to three levels and 20,000 volumes, including a collection of David Rockefeller’s books, complete with personal notes and scribbles by the former patriarch of the Rockefeller family.

“There is nowhere else in the world you get to create a room with the grandeur of that dining room,” Guidara said.

The menu is also being adapted to Las Vegas, with exclusive dishes and dramatic flourishes. “We have martini carts and Champagne carts and Jeroboams. We’re going to be flambeing desserts tableside and doing tableside tartares and tableside caviar services,” Guidara said.

The signature roast chicken for two will stay, of course, but the NoMad Las Vegas will offer more steaks than its New York counterpart and even Caesar salad and shrimp cocktail. “There’s a lot of foods that are served here, and it’s not because people are unoriginal, it’s because there are certain dishes you crave here,” Guidara said. “We’re not going to be one of those annoying restaurants that refuses to serve the things that people crave.” 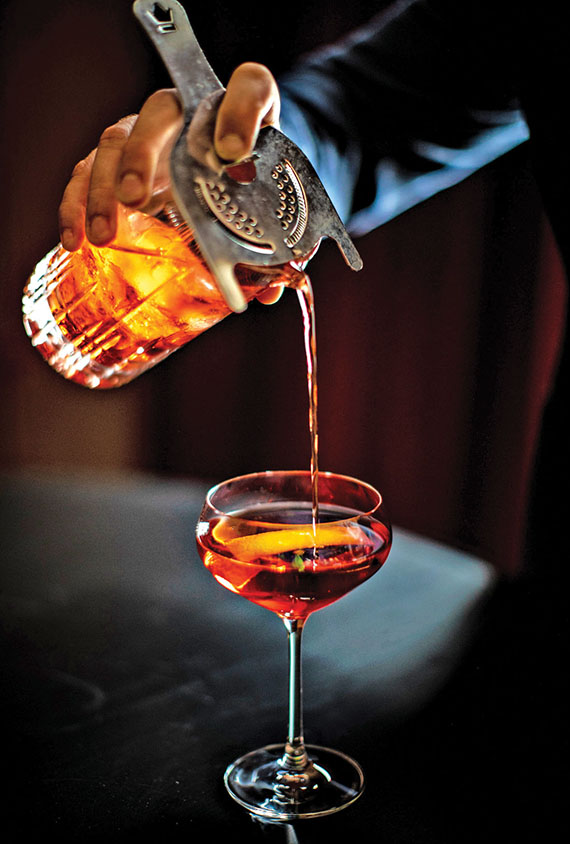 The NoMad Bar offers casual dishes along with a full complement of classic and original cocktails that tend more toward eye-popping than precious. The New York location was named the best bar in North America in the World’s 50 Best Bars list.

“There’s a dish at the bar called Hot and Cold Oysters where half are served over crushed ice and half are served over hot rocks,” Guidara said. “We love that kind of stuff, and when you’re in New York, some people can be a little cynical and maybe give you a hard time if you do things that are almost too much fun. In Vegas, everyone’s looking to have fun.”

Hence the zombie cocktail for two served in a burnished bronze skull, the (very) blue Hawaiian with a tropical garnish and the “cocktail explosions,” large-format mixed drinks delivered in a crystal chalice and meant to serve a crowd and start a party.

Between the restaurant and bar, a Parisian-style street cart will sell red roses to guests as they walk by.

“[It’s] beautiful and hilarious and absurd and romantic,” Guidara said with a laugh. “You could never get away with it somewhere else, because people would say you’re being ridiculous, but I think it’s awesome, and I’m excited to be able to do it here.”

Perhaps the biggest challenge for the NoMad Las Vegas will be translating the brand’s renowned hospitality to a larger footprint and a more occasional traveler.

In New York, he added, the hotel attracts regulars (including MGM Resorts CEO and chairman Jim Murren) who come back again and again. “In a market like Vegas that’s a little more transient, we have to bob and weave a little bit and kind of be better at our game and make an impression faster.”

However, bringing the brand to Las Vegas and aligning with Strip powerhouse MGM, also presents an opportunity for the Sydell Group that’s not lost on its CEO. In New York, L.A. and London, he said, people know NoMad. Outside of those big three cities? Not so much.

“By going to Vegas and having our name up on the Strip, I do think it’s a real introduction to America, and that’s exciting for us,” Zobler said. He said he hopes guests at the Park MGM will stop by for a meal or a drink and that NoMad guests take advantage of everything its sister resort has to offer, from a forthcoming restaurant by chef Roy Choi to a Golden Knights hockey game nearby.

Guidara said he expects NoMad guests from other markets to make the hotel their home base in Las Vegas, a rush of in-the-know visitors eager to check out the new kid on the Strip and “people who have no idea who we are and what it is and stumble upon it.”

And, sitting in a NoMad Las Vegas hotel room, buttoning up the final details of this long-running project, he’s excited to show off what they’ve created.

When you’ve been working on something for so long, Guidara said, there’s usually some small element that doesn’t turn out as planned, some tiny detail that doesn’t live up to your imagination.

“You dream up what you think it’s going to look like in your head, and it’s almost impossible for you not to be let down a little bit,” he said. “I was really worried when it was done that it wasn’t going to live up to my dream of what it could be.”

Not the NoMad Las Vegas.

6 ways to start saving for next summer’s vacation now

The 17 Most Hotly Anticipated Hotel Openings of 2019