What’s a world-class art exhibit highlighting England’s greatest painter doing at a museum best known for ships, sails and scrimshaw? Redefining that museum, for one.

When J.M.W. Turner: Watercolors from Tate opened at the Mystic Seaport Museum in Mystic, Connecticut on Oct 5, it signaled the arrival of a bold new era for the museum, an “Era of Exhibitions.”

And what an exhibition it is.

Turner’s importance cannot be overstated. Neither can that of the Tate, where the works on view in Mystic come from, universally acknowledged as one of the world’s elite art institutions.

J.M.W. Turner: Watercolors from Tate forms the largest exhibition of watercolors by Turner ever seen in the U.S.

Which brings us back to our original question of what this exhibit is doing at the Mystic Seaport Museum and not the Museum of Fine Arts, Boston or The Metropolitan Museum of Art? The answer can be found inside the Thompson Exhibition Building, a stunningly gorgeous 14,000-square-foot, $15.3 million exhibition hall opened on the Mystic Seaport Museum campus in September of 2016.

“When Mystic Seaport Museum was dreaming of developing a major exhibitions program—one that could compete with the big city art museums—we needed to communicate to our architect the quality of exhibition building we aspired to,” Mystic Seaport Museum’s Senior Vice President for Curatorial Affairs Nicholas Bell said. “(We) came back to the architect with a simple statement: the building needs to be good enough for (J.M.W.) Turner because Turner stands at the pinnacle of marine painting.”

Turner’s The Fighting Temeraire pictures the glorious 98-gun HMS Temeraire, a stately ship of the line which served Great Britain with distinction, being towed to port for scrapping by a stubby, ugly, steam tugboat belching smoke, Turner making obvious his nostalgia for the passing era. The Fighting Temeraire is Turner’s most famous painting of the sea, but just one of countless oils, watercolors and drawings devoted to the subject. No one before or since has painted the ocean better than Turner.

Which is why an exhibit of his work at Mystic Seaport Museum makes sense.

The Museum’s grounds cover 19 acres on the Mystic River and include a recreated New England coastal village, a working shipyard and formal exhibit halls. The Museum is home to more than 500 historic watercraft, including four National Historic Landmark vessels, most notably the 1841 whaleship Charles W. Morgan.

The museum is the largest maritime museum in the U.S. and the second-largest in the world.

All of which is great, but no longer enough to stem the tide of dropping annual attendance, a trend dating back to the 1970s and 80s.

MSM President, Stephen C. White, along with the museum’s board, developed a vision for the “Era of Exhibitions”—a reimagining of the museum born out of this necessity. These exhibitions, furthermore, needed to be significant. They needed to be special. They needed to rotate regularly and punch far above the weight of what Mystic Seaport Museum had imagined previously.

It was Bell’s job to sell that vision to the Tate.

“To their credit, they listened, and they got it,” Bell said.

Turner and MSM, it turns out, form a perfect pairing. 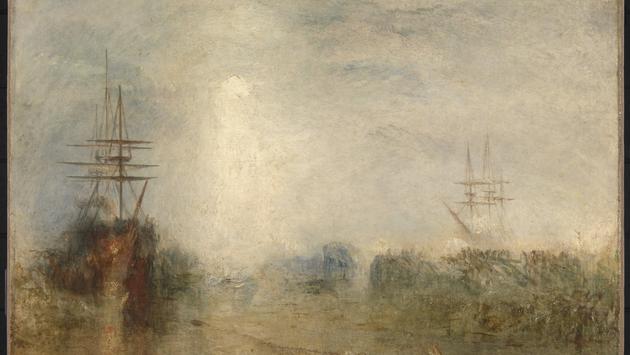 Watercolors from Tate is a chance to see Turner’s work in a setting that evokes his time—a recreated seafaring village of trade shops, ship smiths, coopers, woodcarvers, riggers and vessels which would have been at sea at the very time Turner painted the pictures on display.

“Generations of art students, painters and amateurs have ‘copied’ Turner watercolors, but one can always spot the difference,” Tate Britain’s David Blayney Brown, the world’s foremost expert on J.M.W. Turner said. “The copies miss the sparkle, the minute variations of brush-marks, the subtle gradations of color—some of his methods are quite easy to imitate, but you can’t copy genius.”

“They are his most personal and experimental works and really pushed the boundaries of the medium and its potential to portray light and atmosphere—the essence of his art,” Brown said.

MSM will be the only U.S. location for this exhibit.

Founded in 1929, Mystic Seaport Museum was born at a time when the maritime trades in New England were dying. Wooden boats were being burned for firewood and precious artifacts were simply being tossed away.

While diversifying its programming, MSM continues holding firm on its mission to maintain that heritage.

In addition to the investment made in the Thompson Exhibition Building, the museum invested $15.6 million in the early 2000s to build a state-of-the-art research facility for its permanent collection of more than two million items, an almost inconceivable array of paintings, sculpture, decorative and folk art, vessel parts, tools, maps, charts, logs, registers, contracts, correspondence, ephemera, uniforms and photographs.

The museum also houses a planetarium, but its unrivaled flagship, literally, is the Charles W. Morgan, the last of an American whaling fleet that numbered more than 2,700 vessels. Built and launched in 1841, the Morgan is now America’s oldest commercial ship still afloat – only the USS Constitution is older.

Fewer than 5,000 people call Mystic home, but the charming village conveniently located along Interstate 95, roughly halfway between New York and Boston, has attractions a destination 20-times its size would boast about.

The Mystic Museum of Art is currently hosting an exhibition in support of MSM’s Turner show, investigating his impact on the Mystic Art Colony.

And of course, pizza. Mystic Pizza. Yes, the very same from the 1988 movie starring Julia Roberts.

PICTURES: What it’s really like to fly with British Airways during the pandemic