A Virgin Australia flight has had to make an emergency landing after an “engineering issue” was reported and white vapour was seen coming from the aircraft’s right engine.

Flight VA69 from Melbourne to Hong Kong had been flying for around half an hour when the pilot made the decision to turn back rather than continue the nine-hour journey.

The captain requested a priority landing into Melbourne’s Tullamarine Airport and turned the jet around somewhere over Swan Hill in Victoria, before touching down around an hour after take-off.

Video showing white vapour issuing from the engine prompted speculation that there had been a fuel leak.

A Virgin Australia spokesperson said: “We can confirm flight VA69, travelling from Melbourne to Hong Kong, made an air return and landed safely back in Melbourne this morning after an engineering issue was detected shortly after take-off.

“In accordance with standard operating procedures, the Captain made the decision to return to Melbourne as a precautionary measure and our engineers are currently inspecting the aircraft.

“The safety of our aircraft, guests and crew is our highest priority and we will work hard to have our guests on their way to Hong Kong as soon as possible.”

Passengers have been rebooked to fly to Hong Kong tomorrow, according to local media reports.

It follows another flight making an emergency landing after a piece of the plane broke off and flew into the engine.

The malfunction occurred nearly an hour into Delta flight number 1425, after the plane had departed from Atlanta to Baltimore on Monday 8 July.

“After we heard the boom, we just saw all this smoke come up into the cabin and that’s when we really started freaking out,” one passenger told Baltimore’s WMAR-TV. 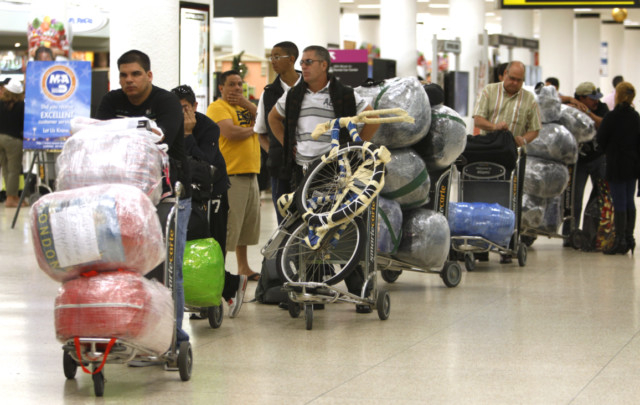 Save yourself a lot of hassle by packing your luggage correctly. UAE airports have rules in place as to what you can and cannot pack in your checked in luggage as well as your cabin baggage when you travel.

All bags brought into Dubai Airport for example must have at least one flat surface. Round and irregular shaped parcels will not be accepted at check in. Your bag also shouldn’t have a long strap.

You can check in rectangular luggage, a handbag with a flat bottom or any box, as long as it is sealed properly.

According to Dubai Airports maximum two pieces of baggage are allowed for international travel, with the total weight not exceeding 32kg. However this definitely varies by airline and fare type. Always make sure you check with your airline before you fly. Baggage larger than 90cm long, 75cm high and 60cm wide, or that does not have a single flat surface, will need to be checked in at the oversized baggage counter, as it won’t be accepted on the standard size luggage scanning belt.

Usually airlines accept two pieces of hand luggage. A shoulder bag (purse, laptop bag, backpack) as well as a small cabin bag. Cabin baggage should have a maximum length of 56 cm, width of 45 cm and depth of 25 cm including all handles, side pockets and wheels.

All liquids should be packed inside a clear, re-sealable plastic bag, within your hand baggage. The item can’t be more than 100ml and the total of all your items can’t exceed one litre.

Exceptions: Medication, baby milk and foods and special dietary requirements to be used during the trip.

Packing liquids can be done in any quantities into checked in bags.

What are banned items to have in any luggage?

2.Goods intended to be imported from boycotted countries

3.Goods from Israeli origin or bearing Israeli trademarks or logos

7.Original engravings, prints, lithographs, sculpture and statues in any material

11.Any other goods, the importation of which is prohibited under the authority of U.A.E. customs laws or any other laws in the country

What is allowed when you travel?

1.Passenger’s personal belongings are permitted entry and shall be exempted from customs fees.

2.Still and moving image video cameras with their appropriate tapes, films and accessories.

3.Cash money, currencies and travelers cheques altogether less than Dh100,000 and the passenger’s age shall not be less than 18 years old.

5.Agreeable quantities of projectors for displaying slides and films including accessories.

Carry on vs. Checked in

According to Emirates Airlines, Batteries that are spare or loose, including lithium metal or lithium ion cells or batteries, for portable electronic devices must be carried in carry-on baggage only.

Articles which have the primary purpose as a power source, e.g. power banks are considered as spare batteries. These batteries must be individually protected to avoid short-circuit. Each passenger is limited to a maximum of 20 spare batteries.

Lithium Batteries, spare or loose with a Watt-hour rating exceeding 100 watt hours but not exceeding 160 watt hours for consumer electronic devices and Portable Medical Electronic Devices (PMED) or with a lithium content exceeding 2 grams but not exceeding 8 grams for PMED only require special permission from the airline. A maximum of two spare batteries are allowed in carry-on baggage only. These batteries must be individually protected to prevent short circuit.

E-cigarettes (including e-cigars, e-pipes, Electric Portable Incense (Perfume) Burner or other personal vaporizers) containing batteries must be individually protected to prevent accidental activation. They cannot be placed in your checked in luggage. Can only be travelled with on a carry on.

For safety reasons, airports in the UAE will not accept personal motorised vehicles such as hover boards, Segways and smart or self-balancing wheels on flights. Dubai Airports for example prohibits the carriage of all such devices – with or without batteries – as checked–in or carry–on baggage. This regulation still applies even if you’re connecting in the UAE from an airline that has accepted them.

Gas cartridges that are small and non-flammable and containing carbon dioxide or other gases require special permissions from each airlines and not more than one device per customer.

Smart bags: Do or Don’t?

Whether you’re flying with Emirates or any other airline, bear in mind that if you are flying to the United States, smart luggage smart luggages has been banned since January 2018.

A number of other airlines, have banned smart bags from the hold unless the lithium battery can be removed. Smart bags use lithium batteries to run GPS tracking systems, phone chargers and electronic locks, which have been linked to fires on planes.

Passengers can carry the bag into the cabin if it’s small and the battery can be switched off.

What are the items permitted to take on a flight?

1.Passenger’s personal belongings are permitted entry and shall be exempted from customs fees.

2.Still and moving image video cameras with their appropriate tapes, films and accessories.

3.Cash money, currencies and travelers cheques altogether less than Dh100,000 and the passenger’s age shall not be less than 18 years old.

5.Agreeable quantities of projectors for displaying slides and films including accessories.

Top 10 luxury luggage items for her