‘We are in the eye of the storm,” says Sami, the moustachioed owner of a tiny café perched on the edge of a precipitous canyon. “Israel, Egypt, Syria, Iran, Iraq, Saudi Arabia – they’re all around us. But here is calm.” He gestures around the spectacular ravine in front of us. We’ve spent all day zig-zagging down one side and up the other. “Is Jordan not calm and peaceful?” I have to agree. “But tourists no longer come,” he adds gloomily. “They’re afraid. Tourist industry is in trouble. We can’t make ends meet.”

We’re on the second day of a week-long visit to Jordan. We’ve seen the Roman ruins at Jerash, floated in the Dead Sea, gazed across at Israel from Mount Nebo where God showed Moses the Promised Land, and we’ve seen mosaic-filled Byzantine churches. Now we’re travelling cross-country. Green plains are replaced by desert as we plunge into Wadi Mujib canyon, which Moses is said to have walked through on his way from Egypt.

And here, miles from anywhere, is this little rest stop, crammed with rugs and cushions and Bedouin pottery, with a smoke-blackened kettle hanging on a branch outside. We sit looking out over the canyon, drinking grainy black coffee or sweet mint tea while Sami regales us with stories.

Jordan is in a ring of fire, bordered by Israel, Syria, Iraq and Saudi Arabia. The fear that there might be conflict here too has had a disastrous effect on tourism, so much so that the Jordanian government recently announced measures to counter the decline – waiving visa fees for tourists and axing departure taxes.

I too had qualms about coming. But it seemed an irresistible chance to have the ancient city of Petra – half carved out of rock – largely to myself, and to follow in the footsteps of T E Lawrence, the legendary Lawrence of Arabia, who charged across the desert on his camel during the First World War, at the head of his Arab forces, and lead attacks on the Ottoman Empire. 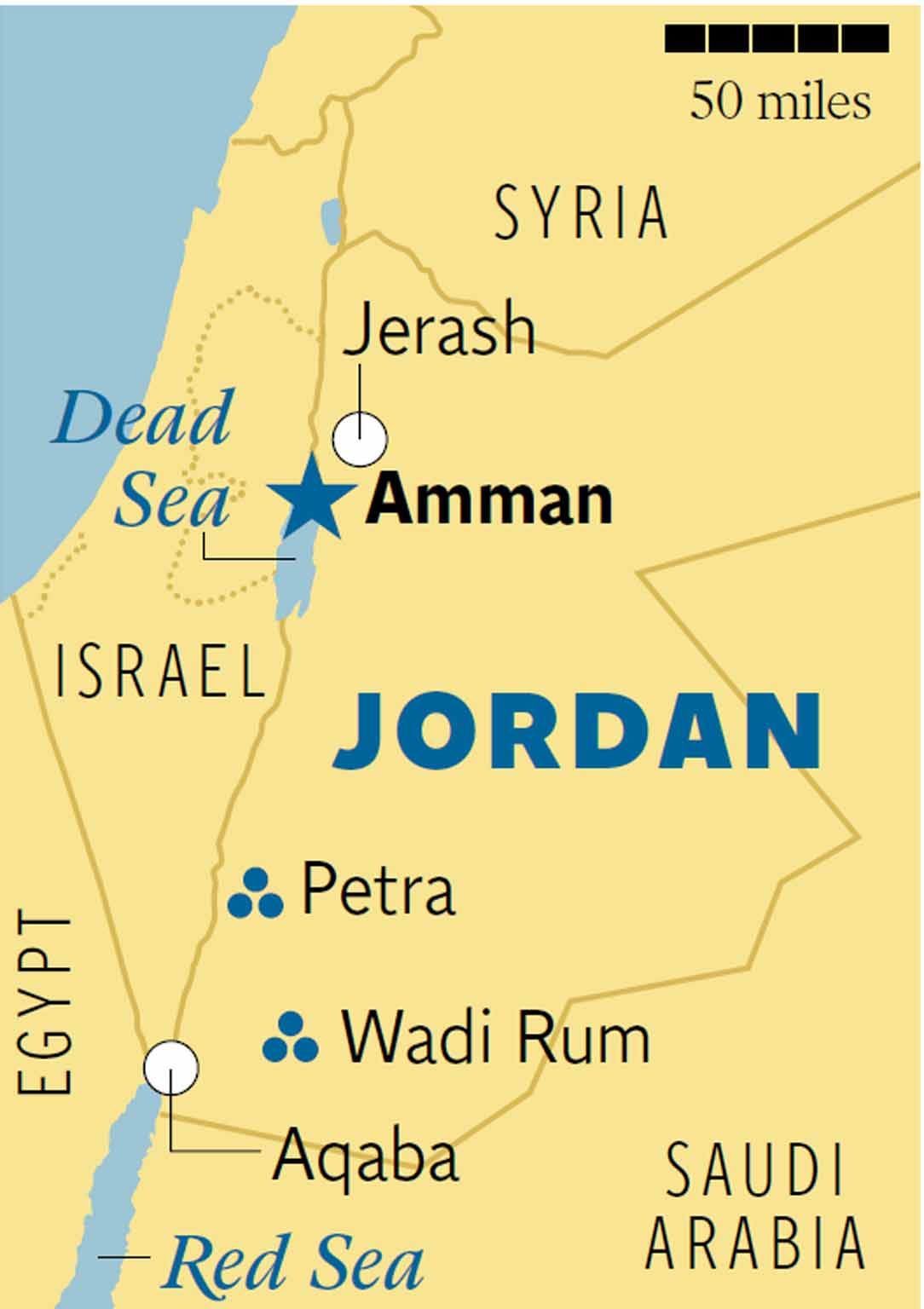 I usually travel alone but on this occasion I decided it might be better to go with a tour operator, Exodus. If it was sending people to Jordan, it must be safe, I thought – and there would be a local guide who would know where to go and where to avoid.

Wa’el, our ebullient half-Bedouin guide, wears a scarf around his head, with sunglasses jauntily perched on top. He has no problem answering any question we care to throw at him. On top of the population of six million Jordanians, there are now countless refugees living in camps on the Syrian border – which is one part of the country we won’t be visiting, he says. But our experience of Jordan is of a country at peace.

From Wadi Mujib we drive through desert to the brooding crusader castle at Karak and, well after nightfall, finally arrive outside Petra. We’re all excited the next day as we enter the long, narrow chasm that winds down to the famous lost city. The towering rock walls are glorious shades of deep rose, pink and red, with mysterious carvings of obelisks, gateways, stepped pyramids and a worn relief of the legs of a camel and his driver. The occasional olive tree sprouts from a crack. It’s a long, hot trek before we peer between the rocks to catch our first magical glimpse of columns and carved architraves.

Once, camel trains would have been winding down this ravine. It’s the only entrance to the valley. Petra was the bastion of the Nabataeans, a peaceful trading people who thrived from 500BC to AD106 when the Romans, under the Emperor Trajan, took over. We explore the long, colonnaded street, the vast amphitheatre and rubble-strewn temples, and clamber around the caves that riddle the cliffs – not habitations but burial places, it seems; the ground inside is carved into grave-shaped hollows. A grizzled Bedouin with a flowing white scarf around his head sits on the rocks playing a melancholy tune on a one-stringed rababa.

“Petra is deserted,” says Wa’el grimly. It’s not completely empty but tourists are certainly thin on the ground. The boys offering camel rides and the Bedouin traders selling camel-bone necklaces complain that they have had no sales all day. But with so few tourists, it makes it easy to imagine oneself going back 2,000 years.

From Petra we head for Wadi Rum, the unforgiving desert where Lawrence lived and much of Lawrence of Arabia was filmed. He arrived in the Negev desert and visited Petra and Aqaba in 1914, then joined the British Army and was posted to Cairo. In 1916, he joined the Hashemite forces and in 1917 began his exploits, including blowing up the German-built railway several times before leading the daring foray across the desert with the cry of, “To Aqaba!”

Before setting off into the desert, Wa’el gives us a lesson on how to wind a scarf around our heads Bedouin-style, with one end hanging loose to wrap around face and nose. Then we rattle off on the back of 4x4s. We pass the towering Seven Pillars of Wisdom – named after Lawrence’s book, where the rock has creased into seven gargantuan folds – then we jump out and struggle up a dune, our feet sinking into the soft sand, to gaze out across the vast desert shimmering in the heat.

We stop at a couple of crumbling walls said to have been the house where “Mister Lawrence of Arabia”, as Wa’el insists on calling him, lived during the Arab revolt. There are images of Lawrence’s face carved on the rock, though one looks more like Peter O’Toole (who played Lawrence in David Lean’s 1962 film epic). Camel trains pass in the distance, but surrounded by the endless expanse of sand, it’s easy to feel the lure of the desert and the romance of the Bedouin lifestyle.

That night we stay in a Bedouin camp – a surprisingly luxurious one, with electricity and flushing toilets. A veiled woman rolls out paper-thin rounds of dough and tosses them on to an upturned pan over a fire to make delicious flat bread. Our dinner has been buried in an oil drum in the sand, where it’s been left to stew for three-and-a-half hours. Our hosts dig it up to reveal racks of succulent lamb and vegetables, steaming hot. After dinner we sit in a big circle round the fire, with the starry sky overhead.

From there it’s on “To Aqaba!”, in Lawrence’s camel tracks. On our way, we pass the tiny railway line that he famously blew up. The Red Sea glitters as we arrive at Aqaba. Lawrence and his Arab followers captured it in a surprise attack after an epic ride across the desert. The Ottoman governor had assumed no one could cross and had set no defences on the desert side. Today, Aqaba is a pleasant, quiet town with palm trees along the front, very different from the glitzy high rises of the Israeli resort of Eilat, virtually next door. Men bathe in the sea while women sit at tables on the beach, fully covered.

I walk around town, having tea with shopkeepers who seem entirely unconcerned as to whether I buy anything or not. I am on a back street when I see a crowd of youths. For a moment I wonder if I’ve made a terrible mistake walking here alone. Then they all give me huge grins and shout out, “Welcome to Jordan!”

Lesley Downer travelled with Exodus (0845 863 9606; exodus.co.uk), which offers its “A Week in Jordan” tour (actually nine days) from £1,149pp including flights, guide, transport, hotels, all breakfasts and one dinner. Besides this, you will need to factor in lunches, most dinners and tips.

Emirates creates Stadium in the Sky ·