Home » Destinations » Middle East » How I discovered Poland: A date with history and culture 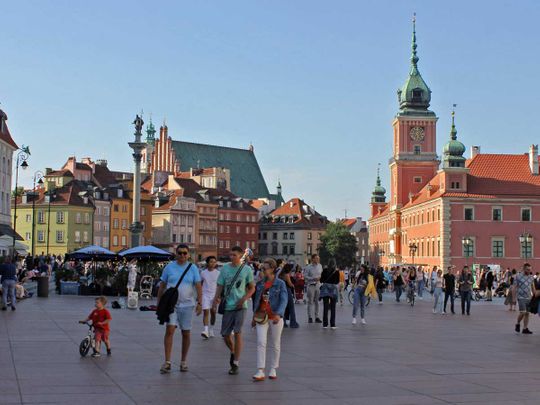 Poland! It was never on my travel list. In my mind, it’s an East European country ravaged by world wars. So when I was assigned a trip to Poland, I hesitated briefly. Then I said to myself: I know very little about the country, so let this be a voyage of discovery.

I would have liked a more immersive experience because there was so much to see and take in. I wanted to sit at one of the wayside restaurants in Wroclaw and watch the world go by with a beverage in hand. Take a stroll through Piotrkowska Street in Lodz. Stand a bit longer on the Orlowo Pier in Gydnia with the wind in my face and watch the Baltic Sea. And Gdansk, where do I even start? The charming port city brims with history.

Poland is no stranger to history, and the past is inextricably entwined in its capital, Warsaw. A city that was destroyed in the Second World War and rebuilt from the ruins. The city is a testament to the resilience of the Poles, who repeatedly bounced back from the horrors of wars and partitions. Time stands still in Warsaw, particularly in the Old Town.

Brutal wars and a painful past may be a recurring theme in Poland, but Frederic Chopin occupies pride of place in Polish tourism. Rightly so, because he is the most famous Pole in the world. People throng Chopin concerts worldwide, and some don’t even know he’s Polish. Chopin spent his later years in France and is buried in Paris, hence the confusion. 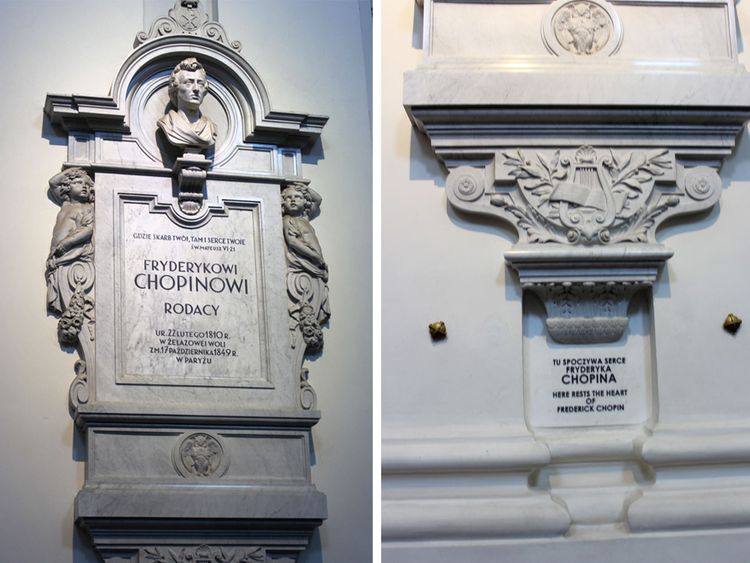 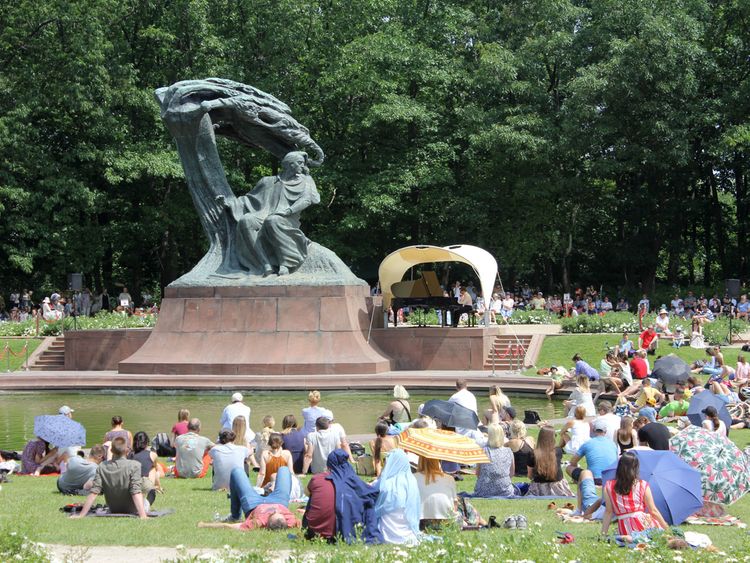 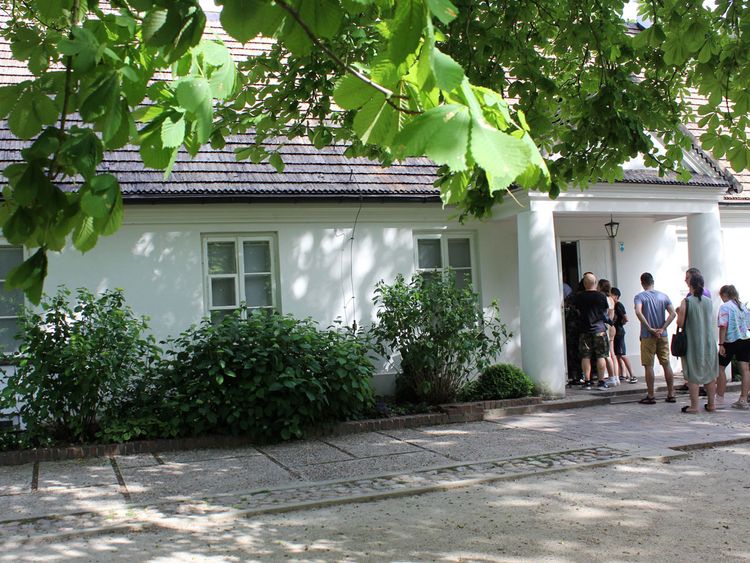 Chopin is everywhere in Poland. I arrived at the Frederic Chopin International Airport in Warsaw. A visit to the Holy Cross Church brought me closer to Chopin’s heart. Literally. It resides in one of the church’s pillars after being smuggled into Poland, past Soviet border guards by his sister, as Chopin requested before his death.

Stepping outside the church, I came across the Chopin benches. The black granite benches, found in 15 places in Warsaw, play Chopin’s works and offer a map to other bench locations. Walking past them, I found a Chopin lodging where he lived as a young man. Heading to the Royal Lazienki Park, I found a sculpture of Chopin sitting under a willow. An outdoor concert was underway.

A 60km trip to Zelazowa Wola brought me to Chopin’s birthplace (he was born in 1810). A lone building with all things Chopin remains on the premises. Aleksandra Swigut, a pianist, played a couple of the maestro’s works. Warsaw is also home to a Chopin Museum. But there’s much more to Poland than Chopin.

A monument that pays tribute to David Copernicus stands prominently at Krakowskie Przedmiescie Street, Warsaw. He’s the Pole who taught us that Earth revolves around the Sun and not the other way around.

Further away is the Royal Castle, a sprawling brick-red building that dominates Castle Square, where Sigismund’s Column haughtily pierces the sky. Difficult to believe that the buildings were rebuilt structures after Germans dynamited the originals following Adolf Hitler’s fury at the Poles’ stubborn resistance.

A few steps away, the Warsaw Mermaid awaited, with a shield aloft and swinging sword over her head. Moving away, I came across the home (now a museum) of Marie Sklodowska-Curie, a Nobel winner in Physics (for the study of spontaneous radioactivity) and Chemistry (discovery of Radium and Polonium, the metal is named after her homeland). 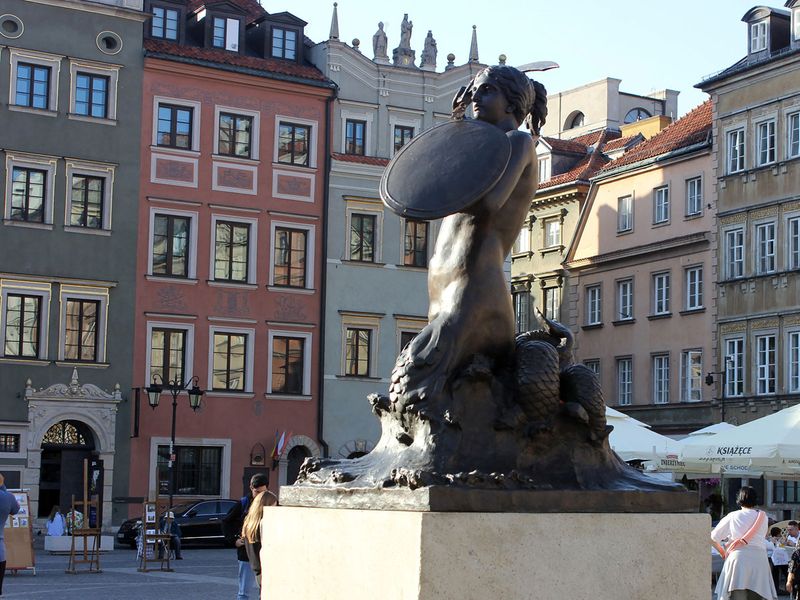 Some grim moments at the boundary of a former Jewish Warsaw Ghetto were followed by a trip to the magnificent Wilanow Palace, a baroque-style summer residence of King Jan III Sobieski built in the 17th century.

Another palace loomed in Lazienki Krolewskie, or the Royal Baths Park: the Palace on the Isle, which dates back to the 17th century. Initially a Baroque Bathouse Pavilion, it was converted into a neoclassical palace before it became a museum. 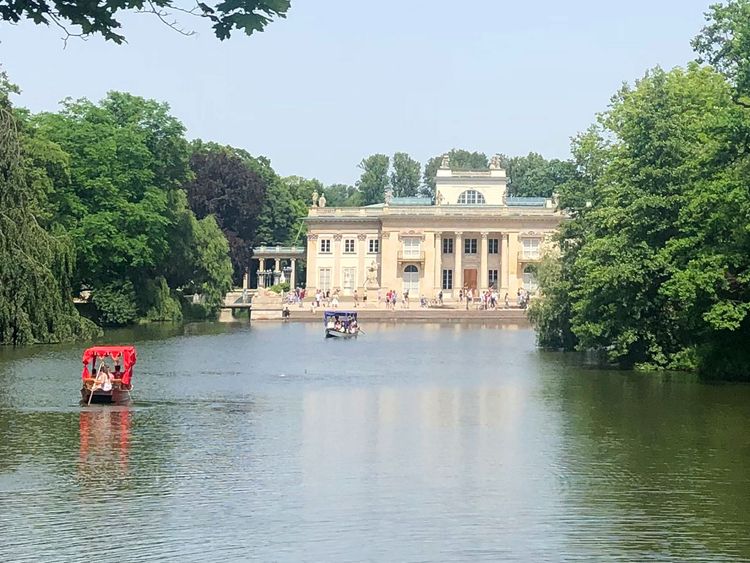 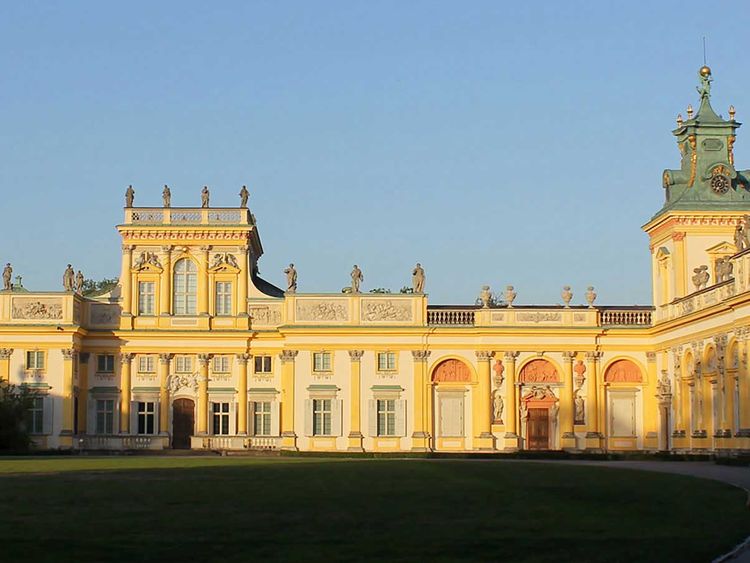 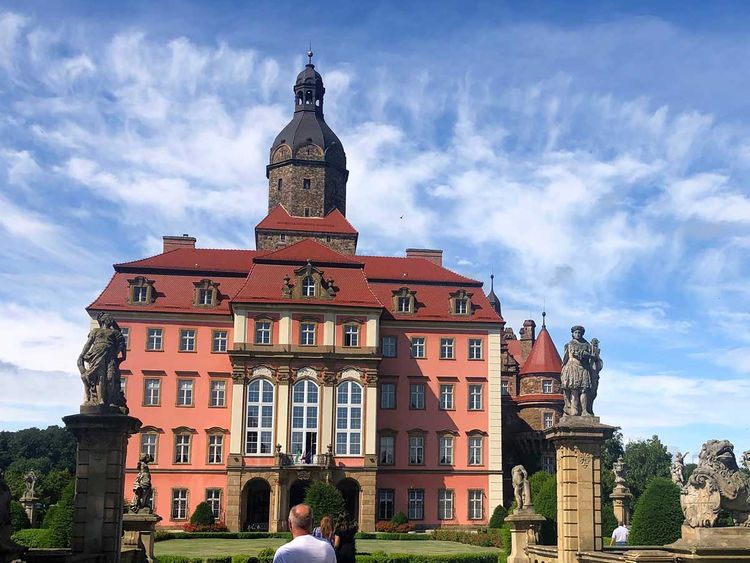 Slate grey skies with dark clouds and a steady drizzle greeted me in Gdynia. The chilly winds failed to thwart a lazy walk over the 180-metre Orlowo Pier, the wooden structure built during the First World War. A coffee warmed me for a spot of forest-bathing as I hiked the nature reserve with the affable Marek Kaminski, the Guinness record-holder who has been both the poles.

Soon I stepped into Gdansk, a seaside city steeped in history. All the ruins were rebuilt in precisely the same manner. I walked the streets in awe, marvelling at the buildings but not fully knowing the weight of history and a past that tied Gdynia and Gdansk to the start of the Second World War. 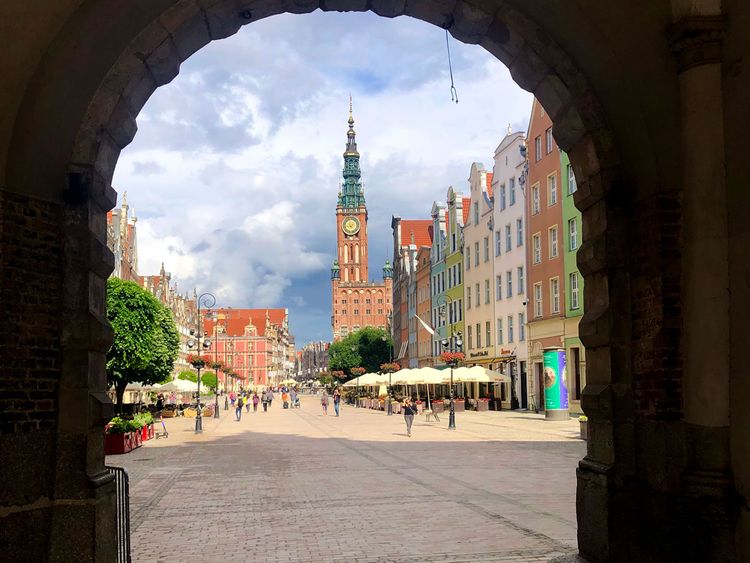 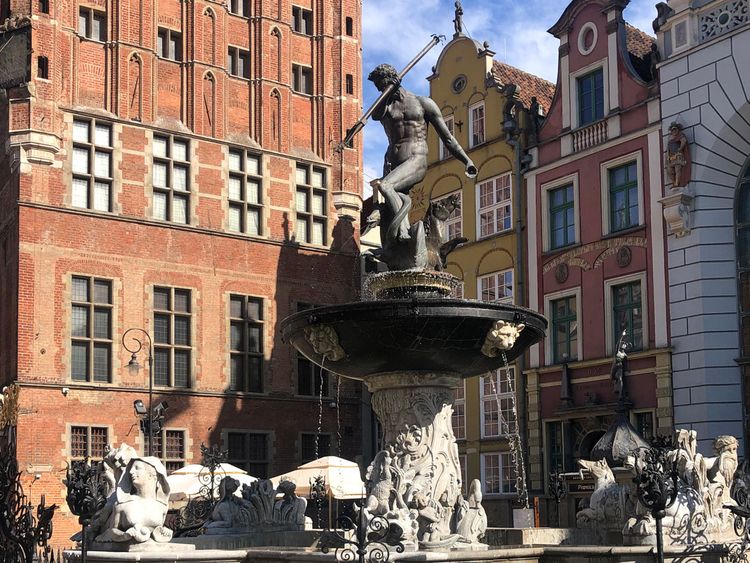 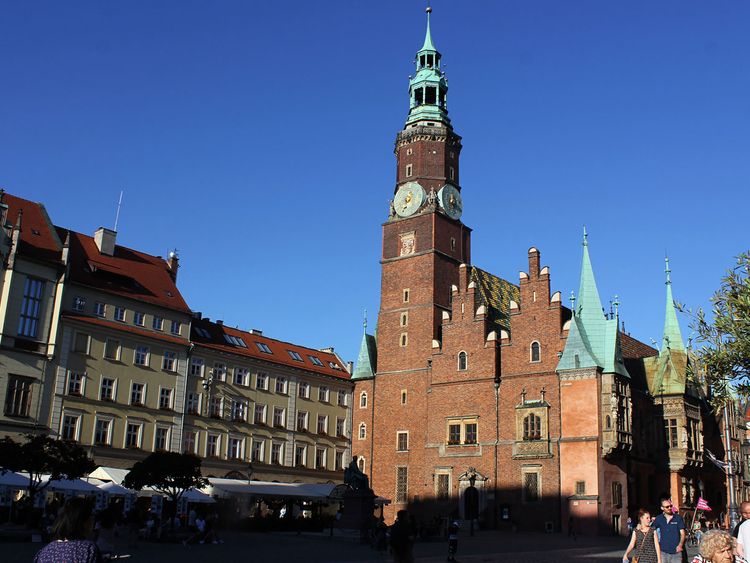 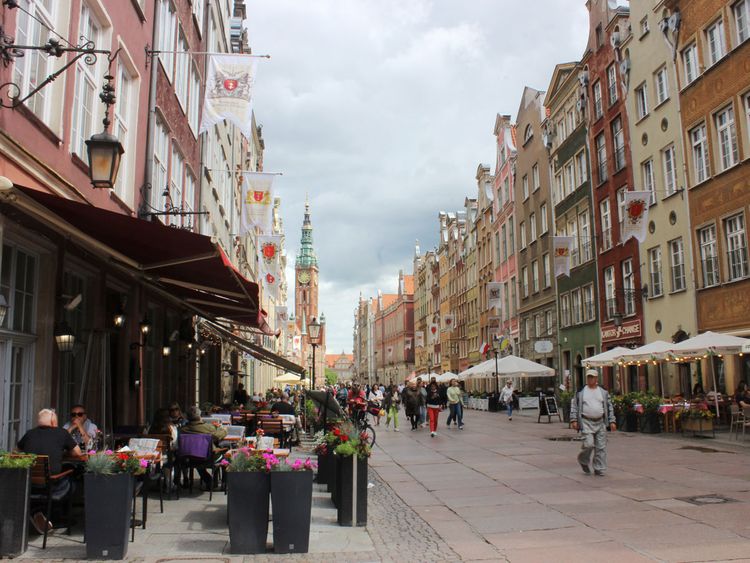 Gdansk is the land of Lech Walesa, the man with a walrus moustache, who led the Solidarity Movement from the docks and rose to become the country’s first democratically elected president. I knew that. But I didn’t know of another Gdansk son, Daniel Fahrenheit, who is more known for devising the Fahrenheit temperature scale and less for inventing the mercury-in-glass thermometer.

The city is also the capital of amber, a fossilised resin from coniferous trees. So a visit to Amber Museum is mandatory. It traces the trade and history of amber from 8000 BC and is a virtual repository of all things amber.

Lodz was the next stop. Lodz is pronounced Wuj and written Łódź in Polish. Being a textile manufacturing centre, Lodz is a fashion capital, and a long walk through Piotrkowska Street is also a must for film buffs. It didn’t happen due to a time crunch. The Lodz film school helped film directors Roman Polanski, Andrzej Wajda and Krzysztof Kieslowski learn the craft.

The land of gnomes, Wroclaw beckoned me. Statues of little people are found everywhere in the city: in the alleys, doorways, street corners and even the city centre. Although more of a tourist gimmick now, its origins lie in the underground protest movement during the days of communism. 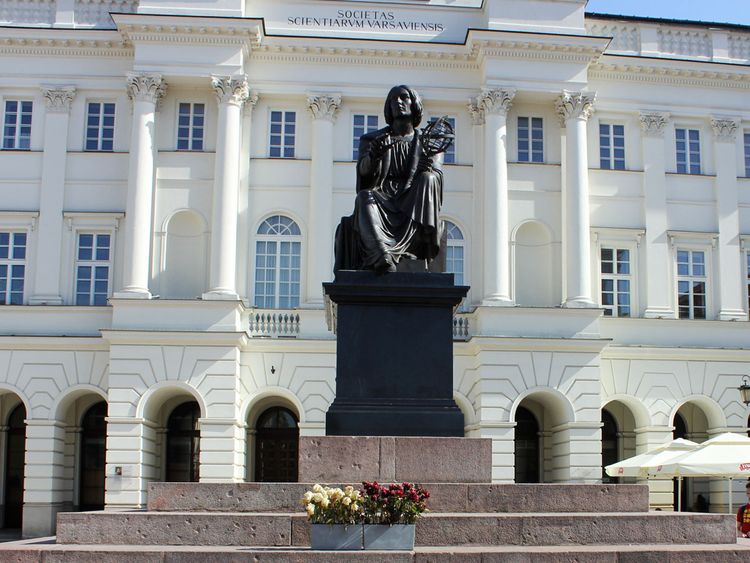 Wroclaw in Lower Silesia is adorned with beautiful buildings, especially around the Rynek (Market Square). Many colourful buildings were rebuilt after the wars but retained their appeal. A buggy ride helped us whistle past many landmarks, but we did make it to the Hydropolis (a water research centre) and the Raclawice Panorama, which houses a 360-degree 3D painting. It’s not a technological marvel but an artwork that fuses art on canvas and real-life objects to depict the 1794 Battle of Raclawice.

A stay at the Ksiaz Castle hotel was a throwback to the past, but the spooky night tour of the 13th-century castle produced spine-chilling encounters with four ghosts of people who served the House of Hochberg. The German and Soviet forces ravaged much of the castle during the wars, and rumours abound that a lost Nazi gold train is said to be buried near the castle.

I didn’t find the gold train but was treated to Poland’s bounty. The seven days sure did change my perception of the country. There’s much more to see and enjoy. So I will be back.

Baltic states: Beneath a Russian veil in Lithuania, Latvia and Estonia