As Mexico City wakes up on any given weekday, most of its citizens participate in a familiar, survival-of-the-fittest routine: commuting in the car-dependent megapolis. It is one of honking, tire-screeching, yelling chilango curses out of sedan windows and, more recently, glimpsing occasional plants among the sea of grey concrete.

The Via Verde project has focused on “turning Mexico City’s grey to green” through the construction of vertical gardens on columns along the Periférico highway, which rings the central city. The photogenic plants climbing up the freeway barriers have featured in countless videos in the local and international media, and often referenced as a sign of the polluted city’s changing priorities.

However, a small but vocal group of activists argues that the government’s support for Via Verde indicates its willingness to double-down on car culture in a city that is already choked with traffic and smog. The “greening” of the highway is simply making car ownership marginally more pleasant, they say.

“In Mexico City, almost all of our local pollution and mobility problems can be attributed to the excessive use of private cars,” says Sergio Andrade-Ochoa, public health coordinator for the NGO Liga Peatonal. “We could just plant trees, but there’s a political fear of limiting the space in the city that is currently devoted to cars.”

The idea for Via Verde emerged in 2016, when architect Fernando Ortiz Monasterio of the firm Verde Vertical started a Change.org petition to gauge public support. The petition outlines specific goals: promising to “produce enough oxygen for more than 25,000 residents, filter more than 27,000 tonnes of harmful gas yearly, capture more than 5,000kg of dust, and process more than 10,000kg of heavy metals”.

The petition also assured supporters of the project’s minimal impact: the vertical garden technology does not jeopardise a wall’s structural integrity, while drip irrigation uses rainwater and other non-potable sources. Monasterio’s friend, the actor Luis Gerardo Méndez, helped publicise the petition and it quickly amassed the 80,000 signatures needed to attract government attention. Verde Vertical was approved.

“All these groups were involved in revising this citizen proposal because it sounded like something that would do Mexico City good,” said the former head of Mexico City’s government, Miguel Ángel Mancera Espinosa, in 2016. “Via Verde could simultaneously change the look of the city and help us meet today’s biggest commitment: the fight against climate change.”

When it came to funding, Verde Vertical also looked to public opinion. Organisers conducted a survey with various options for funding: government funding via taxes, citizen funding via donations to a public trust, or private funding via corporations (with the qualification that 10% of the columns would be used for corporate advertisement). Private funding won, with almost 47% of the 2,440 votes. Subsequently, a group of eligible corporations invested the 300 million pesos (£12m) needed. 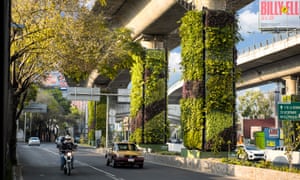 Construction on greening the 1,000 concrete columns began later in 2016 and, so far the plants are thriving. Monasterio, sitting at the window of his office overlooking the Via Verde, is pleased with the way things have worked out: “I’m a capitalist-environmentalist,” he says with a laugh.

Others, however, are less pleased. The Liga Peatonal says the project has failed to live up to its environmental promises. In a pointed comment piece on the online news site Animal Politico, Juan Manuel Berdeja and Sergio Andrade Ochoa reminded residents that improving air quality and combatting climate change are not the same thing.

While plants are crucial for combating climate change, using plants to mitigate air pollution through the process of phytoremediation – changing carbon into oxygen – is more complex. Only a few species have the capacity to purify the air in the way that the Via Verde petition indicated, and the succulents and other plants Verde Vertical favours for their low maintenance needs are not among them. 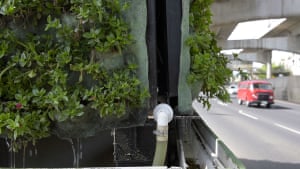 The current Via Verde website has no mention of local anti-pollution benefits, and Monasterio acknowledges that the carbon reduction impact of the project is negligible. Roberto Remes of the city’s Autoridad del Espacio Público says that meeting greenhouse gas and local emissions goals was “never the intention”.

One graphic illustrates that building a single Via Verde column costs the same as planting 300 trees. In a city with a deficit of green space, it is a powerful image.

While Via Verde is privately funded, it is an effort that the government has eagerly co-signed. The Liga Peatonal is among several activists groups who believe the project is a facelift that distracts from other, less-sustainable actions that the city has recently taken.

“There has been a lot of hypocrisy within the government,” says Ochoa. “They celebrate this Via Verde as the project that’s going to create a garden within the city, then they chop down more than 3,000 trees to construct the Mixcoac interchange [recently completed in the south of the city].

“The idea of turning a grey city green feels good to its inhabitants. But in reality it’s just aesthetics. At the end of the day, it’s not going to change the city.”

Pound to euro exchange rate: GBP remains ‘resistant’ against euro with challenges ahead

Children of Westmead add a splash of colour to Carnival Splendor ·