Most Caribbean islands stake claim to the “culinary capital of the Caribbean” designation, but it’s Bajan chefs like Damian Leach and Javon Cummins that give Barbados a stronger argument for that title than most other islands.

Here’s what you need to know about arguably Barbados’ two best chefs at the moment and why you should eat at their restaurants.

Leach is the head chef and co-owner of Cocktail Kitchen, a restaurant that offers rooftop dining and main floor patios overlooking the energetic St. Lawrence Gap.

Cocktail Kitchen specializes in modern Caribbean cuisine and, of course, has a cocktail list with heavy rum influences, as Barbados is considered one of the birthplaces of the sugary liquor.

The restaurant opened in July 2016, which Leach describes as “perfect timing” since it was just one month after he won Caribbean Chef of the Year in the seafood category at the popular “Taste of the Caribbean” cooking contest in Miami.

“People used to travel to Barbados for our beautiful beaches and warm weather,” said Leach, “but I find more and more tourists come now to experience our culture through food. They want to experience authentic Bajan flavors and, of course, the beaches and weather are added bonuses.”

TravelPulse was lucky enough to taste a ceviche made by Leach as part of a cooking demonstration during the inaugural Millennial Travel Forum last year.

And boy was it good.

But what is his personal favorite dish?

“I change my menu a few times a year,” said Leach, “but my absolute favorite right now is the Roast Breadfruit, fire-roasted breadfruit with local lobster and salt fish, tobiko and Bajan pepper sauce aioli.” 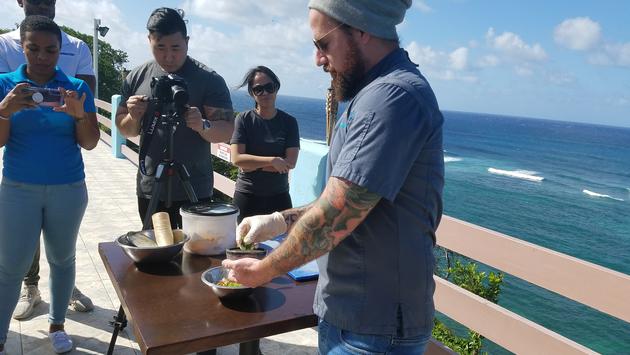 Leach is also the co-owner of a casual lunch spot called The Mill & Co. Before opening Cocktail Kitchen, Leach was the head chef at Tapas, where he spent five years.

“The best part about running Cocktail Kitchen is, unlike my time at Tapas, if I get inspired by something tonight,” said Leach, “and want to change the menu tomorrow, I can.”

So, what advice would he give other chefs looking to thrive in Barbados and in the Caribbean in general?

“Be proud of your cuisine and realize that someone traveled thousands of miles to experience it,” he told TravelPulse. “Utilize all the amazing products we have locally – the black belly lamb, the breadfruit, super fresh fish.”

While dining at Tapestry, Treasure Beach by Elegant Hotels’ new restaurant, as part of the opening dinner of the inaugural Millennial Travel Forum last year, TravelPulse devoured arguably the best pork belly we have ever been served.

The man behind that exquisite meal, which came with plenty of expensive white wine, was Cummins, who has represented Barbados’ national culinary team at Taste of the Caribbean for the past seven years.

And what advice would he give to other Bajans looking to pile up some culinary awards?

“Always be open to continuous learning,” he said. “You never stop learning, so any chance you get to do an internship or one on one with a chef you admire, take the opportunity and always push yourself, and take it to the next level.” 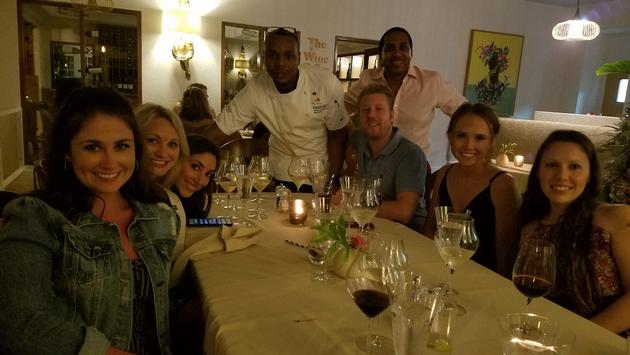 Born and raised in Barbados, Cummins developed a deep interest and love for cuisine at a very young age and has never looked back.

“I became a chef because it was something I always wanted to do, and the love and passion I have for it is real,” said Cummins. “It allows me to express my art and vision through food.”

“Tapestry is my baby,” said Cummins. “A lot of work and time went into creating the concept, menus, plating and overall look of the restaurant, and seeing it all come together is quite rewarding.”

“Being at the helm of it is also a dream come true because I was only 25 when I embarked on this journey, being the youngest head chef at the time, but it has been amazing,” he continued.

Now, back to that pork belly.

“I think it hits all the flavor notes perfectly,” he said.