Home » Destinations » ‘I follow a different person every day’: using strangers to explore the city

Two days after I arrive in Belgrade, I’m being shown the outskirts of the city by a man in pink trousers. I think he must be a local: he knows exactly where he’s going, striding confidently down narrow alleys and across wide roads, showing me parts of the Serbian capital far from the beaten track.

Sometimes I have to break into a little run to keep up. But I don’t get too close, because he doesn’t know he’s acting as my guide to the parts of Belgrade that are off the tourist route – and the last thing I want is for him to find out he’s being followed.

What is Walking the City week?

As cities around the world close central streets to cars to mark World Car-Free Day, Guardian Cities is looking at the joys and trials of urban walking.

The US humourist and writer David Sedaris tells us about walking in cities from Raleigh to Reykjavik. Will Self explains what he learns from perambulations in London, there’s Fran Lebowitz in New York, Helen Garner in Melbourne, “natural navigator” Tristan Gooley in Portsmouth, and writers on Delhi and Newcastle, Cairo and Wellington.

Laura Laker casts a critical eye on the performance of Vision Zero, the global city scheme to eliminate traffic deaths. London has signed up – will it enjoy the success of New York, or the delays of LA? The recent blocking of Sadiq Khan’s plans to pedestrianise Oxford Street does not bode well.

Correspondent Stephen Burgen samples the newfound silence in the Spanish car-free city of Pontevedra, and Matthew Keegan discovers what prompted Hong Kong to reopen a popular pedestrian street to vehicles.

Renate van der Zee looks at the rise, fall and rebirth of the Lijnbaan in Rotterdam – Europe’s first pedestrianised street – while Rachel Aldred at the University of Westminster crunches the numbers to identify the most dangerous London boroughs for people on foot.

Oliver Wainwright explores the City of London’s forgotten Pedways – and asks whether these 1960s walkways can make a comeback.

We consider the phenomenon of “desire lines”, examine the art of following a stranger in the hope of seeing a city in a new light, and much more.

“Follow a stranger” is one of the instructions I’ve been given by Serbian artist Miloš Tomić in what is billed as an alternative tour of the city, and I really enjoy it, while also feeling as if I’m doing something a little bit wrong.

I tell myself I’m not stalking the man in the pink trousers – I don’t know his name or anything about him, and when he leaves the public space of the street to enter a private block of flats, I abandon him and find my own way back to the central Republic Square.

My assignment from Tomić is, of course, not intended to upset anyone. Rather, what I’m doing is a one-off exercise, and, as artist and writer Phil Smith puts it, is handing over control of exploring the city to someone else, chosen at random.

Smith regularly gives this task to students of theatre and performance at the University of Plymouth, seeing it as a valuable exercise. “The idea is that you’re exploring the space but someone else dictates it to you – it neutralises your will,” he says. “The intention – or hope – is that the followed person will lead you into places you haven’t been before.”

It is important to note here that there is no strict legal definition of stalking, but frequency and intent are taken into account; fans of “following” are upfront about the need to respect their subject’s space. 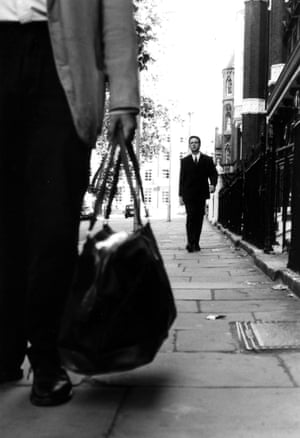 The idea of artists following strangers has a long heritage, as well as a natural affinity with the city, where anonymity is the rule and it is easy to hide in the crowds. Its ancestor can be found in The Man of the Crowd, an 1840 short story by Edgar Allan Poe, in which the narrator pursues a mysterious stranger through the streets of London – then the biggest city in the world – for no apparent reason.

Poe’s account of restless wandering through city streets was seen by philosopher Walter Benjamin as a prototype for the flâneur – the explorer of the modern city described by Poe fan Charles Baudelaire. “The crowd is his element,” the poet wrote in the 1860s (a time when the idle stroller was always male). “His passion and his profession are to become one flesh with the crowd.

“For the perfect flâneur, for the passionate spectator, it is an immense joy to set up house in the heart of the multitude, amid the ebb and flow of movement, in the midst of the fugitive and the infinite.”

Baudelaire’s heirs in 1960s Paris included the Situationists, an artistic and political movement who explored the city on foot in a strategy called the dérive – an unplanned meander through an urban landscape, usually in groups.

Smith’s “following” exercise is inspired by the conceptual artist Vito Acconci, whose 1969 Following Piece on the streets of New York set the template: “Each day I pick out, at random, a person walking in the street. I follow a different person every day; I keep following until that person enters a private place (home, office, etc) where I can’t get in.”

The Belgian-born artist Francis Alÿs varies the recipe with his continuing work The Doppelgänger: every time he goes to a new city, he finds someone to follow based on feeling that they bear a resemblance to himself in some way.

In 1980 the French artist Sophie Calle took following into more personal – and transgressive – territory with her Suite Vénitienne, which documents her following around Venice a man she had met at a party. For another work, The Detective, Calle hired a private detective to follow her through Paris and then published his report alongside her photos.

This personal knowledge is where it might be said following crosses the line into stalking and invasion of privacy, something that Calle – who regularly plunders her own life for her art – knowingly plays with; she has also been criticised for breaking ethical boundaries.

Christopher Nolan’s first film, Following, made on a shoestring 30 years after Acconci’s work, highlights the risks in a fictional take on the activity, with its lead character attempting to break his writer’s block by trailing after strangers in London and getting involved in the life of one of them, a criminal. Calle and Alÿs are among those who document their work with photographs and text, arguably enabling their “victims” to be identified.

In the main, though, artists who use following – whether as a Situationist-style practice or a way of generating material – say they do everything they can to maintain a distance and retain the privacy of their subject. “You need to remain inconspicuous – you don’t want to freak people out and if you get caught you will do,” says performance artist Bill Aitchison, who teaches at the University of Nanjing in China.

Aitchison points out that given he is over six feet tall it is a challenge for him to stay hidden, but he has developed various techniques. “You get a sense of the optimum distance to stay away – you can be too careful and end up losing people,” he says. “Finding things to do is useful: you can always be looking at your phone or pretending to speak on it. Also drinking and eating is a good way to avoid looking suspicious.” 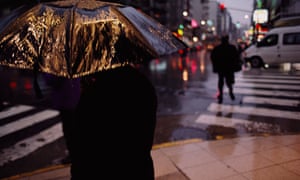 One of the rules Smith gives his students is to stop immediately if they think the person they are following might be aware of it. “Another rule is that they shouldn’t follow anyone who would make them feel uncomfortable if they did, or would be made uncomfortable by their presence,” he says. “It heightens their self-awareness of the impact their presence has on others.”

For Aitchison, “it’s both a way to understand people and to understand how a city works”. In contrast to Alÿs’s tactic, he’ll pick people very different to himself. “In Amsterdam, for example, I started following short men, or older people – if you do that you find out what sort of places they go and sense how they use the city. And you realise how you take your own pace for granted – especially when you follow old people, for example.”

Blake Morris, co-founder of the US group Walk Exchange, undertook to recreate Acconci’s Following Piece in New York a few years ago. “It made me think about the ways we collect data about a place – when you’re following someone around you’re investigating their routines,” he says, noting that GPS now constantly follows everyone via their mobile phones. When we use apps such as Strava we elect to have our routes recorded: big data has taken over the task of charting the city through the movement of its crowds.

But the low-tech way still has appeal. The Russian artist Alisa Oleva introduced a group of trainee architects in Moscow to following, and they enthused about it as “a really useful way of learning about the trajectories of people who use an area – where they go, what shortcuts they take, where do crowds gather”.

Oleva mapped her explorations of one of Moscow’s “sleeping districts” (the residential zones where the vast majority of the city’s workers live) by following commuters home from a metro station. Oleva, who herself grew up in the same sort of suburbs, says: “I didn’t worry about violating people’s privacy because it’s very different from somewhere like London: you follow a person to a huge block of flats, not a private front door.”

Nevertheless, she saw it as “a very intimate thing – it means sharing a bit of someone’s everyday life. There’s a vulnerability to people because they would never think these routes are worth anyone’s attention.”

Meanwhile, for those too anxious to follow people, there is an alternative: Morris has tried following dogs – although that usually means following their owners, too.