Archie Green is a rapper and a producer who uses hip-hop to de-stigmatize mental illness in black and brown communities.

It’s a cause he has championed after facing his own challenges with depression, and a message that Green’s mental health awareness initiative, Peel Dem Layers Back, works to spread in Cleveland, Ohio.

Green, who is one of the 25 inspirational people and organizations being featured in the Guardian’s City Champions series, says that before he experienced therapy around five years ago, he “didn’t really know what mental illness was … We didn’t really talk about it.”

A huge reason for that – and one of the main obstacles Green works to dismantle in his music and advocacy – is what he describes as “the longstanding misconception that black men specifically have to be strong, and can’t be vulnerable, can’t cry, can’t feel emotion. Emotion as a weakness – that’s a lie.”

Now 34, Green said he experienced bouts of undiagnosed clinical depression growing up in Chagrin Falls, an upper-middle-class neighborhood south-east of Cleveland in which he was one of the only black students. As a teen, he channeled loneliness into making music, particularly hip-hop, which captured his attention at age 13 after he saw Jay-Z’s video for Hard Knock Life.

But he didn’t start publicly sharing music grappling with depression and vulnerability until years later. After obtaining an economics degree from Morehouse College and a music business graduate degree from New York University, Green moved from the big city back home to his parents’ house outside of Cleveland. A DUI arrest suspended his drivers’ license for a year, and symptoms of serious depression began to worsen. At Thanksgiving dinner in 2014, he started having a panic attack. “At that point in my life, I was literally counting down the hours to where, if I was not alone by myself, recharging, I’m going to break down,” he recalled. “That’s when I knew something was wrong.”

A concerned friend who was also a licensed psychiatrist finally asked him: “Have you ever considered therapy?” Even the question was “huge”, Green said, “because it’s the first time anyone had ever talked to me about therapy. But secondly, and more importantly, he looked like me.”

Crucially, he found an African American male therapist who could relate to his experience. “Especially in the black community, I always try to tell people: you don’t have to go to just the free clinic and just take whatever is available,” Green said. “You can be specific with who you ask.”

Green also turned again to music. In April 2016, a story from Vice on rappers opening up about depression featured one of his songs, Layers. With sweeping piano plinks and unvarnished lyrics such as “Let’s talk facts: my life was very dark,” and “my doctor said it gets better soon as I peel dem layers back,” the song struck a nerve and went viral, with 25,000 streams on Soundcloud within two weeks. The response made Green consider his mission differently. “I started getting this idea that maybe I should be doing more than music, maybe I should start telling my story,” he said.

He founded Peel Dem Layers Back in 2016, when he was working as an outreach coordinator for Cleveland’s Museum of Modern Art; since then, the group (Green and usually one or two volunteers at a time) has hosted quarterly and bimonthly events, some with licensed mental health professionals on hand for on-the-spot consultations. For the Root of It All, a mental health awareness festival he hosted, six hip-hop artists, Green included, performed a couple songs each and spoke of their own mental health stories. Artists talked about “how they dealt with suicidal thoughts, artists who talked about trauma that they faced as a kid, about ramped up anxiety”, said Green. “Really pouring out – that’s not something you typically get from a rap show.”

Peel Dem Layers Back’s biggest event to date was a show called My Violin Weighs a Ton, which brought hip-hop culture to Cleveland’s Severance Hall, a historic venue renowned for its symphony orchestra, for the first time. The concert, in partnership with the Lexington-Bell Community Center and inspired by such genre crossovers as Nas at the Kennedy Center or Jay-Z at Carnegie Hall, featured the Cleveland Symphony Orchestra accompanying a group of kids, all of color, who played classical guitar, performed their own rhymes, and sang Old Town Road to “the most diverse crowd they’ve ever seen – we’re talking about race, age, gender, sexual orientation, class”, Green said.

If there’s a unifying strand for Green’s work, it’s the act of sharing, whether it’s music, creativity, vulnerability or common experience. Through it all, Green has remained open, determined to convince others that it’s OK to be broken, OK to share when you’re not doing well. “I’ve been going to therapy now for almost five years,” he said, “and all I want to do is save other people and be like: you can be healthy too. Please talk about this.”

‘These streets will never love you like a neighborhood should’ 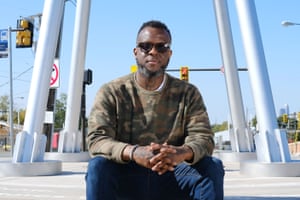 Cleveland’s Buckeye neighborhood is well-acquainted with the words of poet Damien Ware: they are painted in bright colors on buildings and embossed in the ground at the base of a statue of a water tower, a monument to the fresh water in nearby Lake Erie that replenishes the neighborhood.

It’s a message that evokes positivity. “These streets will never love you like a neighborhood should” reads one building, a message to a neighborhood that has become better-known for its poverty and gangs than for its sense of community.

“These neighborhoods are so segregated, the city is so segregated,” said Ware, who is one of 25 inspiring people and groups being featured in the City Champions series by the Guardian and the Plain Dealer newspaper.

Ware was raised in the Buckeye neighborhood and can barely remember a time when it was not deteriorating. Abandoned buildings and gun violence are now common in the area. “When you live in a culture of poverty, you have no hope.”

Ware has been trying to bring hope to the community that raised him through poetry, not only by showing his words on buildings, but also teaching people how to tell their own stories. While Ware is busy with a day job as a social worker with the Department of Veterans Affairs, raising three young boys and finishing up his master’s in creative writing, he manages to find time to teach poetry workshops across Cleveland, particularly in areas that struggle to prioritize the literary arts.

Some neighborhoods in Cleveland have illiteracy rates of 90%.

Growing up, Ware was first introduced to the literary arts through rap music. Though rap was considered a “public enemy” at the time, he wrote poetry in the form of raps. Now, when Ware leads workshops with young students, he teaches them poetry techniques through their favorite hip-hop artists.

Ware, who served a year in Iraq, has also made it a priority to connect with fellow veterans through writing and currently leads a writing workshop for veterans called Veteran Voices where he teaches how to use their stories to connect and speak about the impacts of going to combat, like suffering from post-traumatic stress disorder and dealing with stigma.

“You have to remind yourself that you are great, that you are powerful, because as a black man in America no one else will tell you that,” he said. “As a combat veteran who is dealing with these things … you have to continually say to yourself, this is who I am, and I’m going to be better, that I see myself as something else.”

In a recent series of workshops called Cleveland Stories, Ware asked residents to write about their own neighborhoods with the goal of sharing stories and building a sense of solidarity in the process. “I keep that at the foundation of my work, speaking to the human-ness in all of us, and being able to hopefully inspire people to tell their stories because we all have one.”

These photos were a collaboration between Jasmine Banks, a student photographer at Shooting Without Bullets, Amanda D King and McKinley Wiley.

The Shortest Railways in the World Take Less Than a Minute

‘Safer to go abroad than UK’: Overseas holidays are cheaper and ‘safer’