It’s Halloween, and a group of young Parisians, in various forms of fancy dress, are sitting around drinking beer. Nothing unusual about that, you might think – and you’d be right. Except for the fact that they’re 20 metres underground, in a candelit cavern, a stone’s throw from a huge pile of human bones.

This is “Kataloween”, an annual celebration held in the forbidden part of the Paris catacombs – the network of tunnels, caves and quarries that span the entire southern half of the city. Every year, partygoers, hedonists, anarchists and the odd plucky tourist descend into this mysterious underworld for a Halloween party with a difference.

“It’s all about escaping from the norm for a few hours,” says Antoine, as a DJ pumps out electro beats beneath strings of coloured lights. “Here, there is no one to tell us what to do; here, we can do as we please. Here, we can forget Macron and his stupid centrist government; here, we are free.” 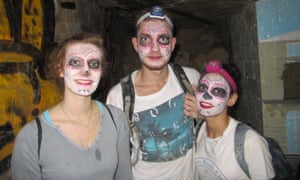 Though entering the system is punishable by a fine, they deem the risk worth taking. Spanning roughly 250km, this vast subterranean landscape has its origins in the ancient underground quarries from which Paris was built. By the late 18th century, however, with parts of the capital starting to cave in, the authorities secured the foundations, added connecting access tunnels – and effectively created a shadowy double of the streets above.

Meanwhile, there was another problem. The city’s cemeteries had begun overflowing – quite literally in some cases – causing a serious threat to public health. The authorities hit upon the idea of turning the former quarry galleries into an ossuary – a site for the storage of human remains. Today, the chambers are home to the skeletons of some six million Parisians – with just a tiny section, the newly renovated tourist attraction Les Catacombes de Paris, open to the public, who come to marvel at the macabre displays of skulls and bones. Most people in the Left Bank cafes up above remain only dimly aware of what lies beneath.

“Few people realise the importance of the wider quarries to the city’s history,” says Gilles Thomas, who has written 10 books on subterranean Paris. “Aside from the interest of the catacombs themselves, the tunnels are an exact blueprint of Paris in the 18th century. You travel two minutes beneath the city and you’re transported back 200 years.

“Then there are the ancient inscriptions, dating back to when the quarries were created, and the pieces of art from down the centuries – from wall paintings and mineralogy displays to a scale model of a castle. Plus, of course, there’s all the wartime history – even if so much of it is now covered with graffiti tags.”

He shows me a photograph of a bunker used by the Nazis during the occupation. The wartime inscriptions are now barely recognisable, covered by a rainbow of spray-paint.

A major new museum dedicated to the liberation of Paris is set to open directly above the catacombs next year, and there are plans to organise visits to the underground shelter used by the French Resistance – though that, too, has been vandalised. 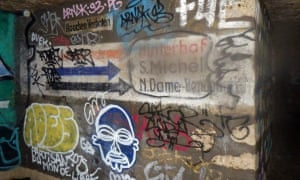 “One of the biggest problems is the internet,” says Thomas of the graffiti. “Back in the old days, it was only a select few who knew how to enter the quarries. Now, with all the internet forums, Facebook groups and YouTube videos etc, it’s far easier for people to enter – and the majority of them have no interest in the history of the place. They come with spray paint, steal plaques, leave rubbish.

“We call these people ‘cataclasts’ – those who degrade the quarries – as opposed to the ‘cataphiles’ who love, cherish and respect this precious landscape.”

By cataphiles, he is referring to the unofficial custodians of the Paris underworld. Gaining access via secret entrances – manhole covers, Métro lines, a forgotten door in a basement – this self-organising community of urban explorers roam the labyrinthine galleries, hidden caverns and forgotten tombs with zeal. 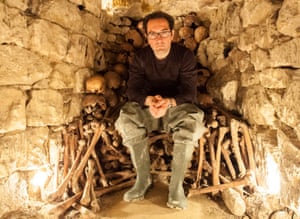 “From the moment I first entered, I knew I was going to love this place,” says Bertrand Robion, a self-described cataphile and photographer of the landscape. “Even if I didn’t know where I was, I was astonished by all the rooms and the art. It’s also a surprisingly natural world – made up of sand, limestone and crystal-clear water – as you’re at the level of the water table.

“Then there’s the fact that you can truly switch off. There’s no phone or internet signal, so it’s the only place I’m not connected with Facebook, Flickr, etc. When I walk inside the network, I focus only on the catacombs.”

They come to explore tiny crevices and wade waist-deep through water, or to share a drink with fellow cataphiles. Occasionally, they make art – from murals and mosaics to sculptures – but always in spots carefully chosen not to compromise anything of historical significance. 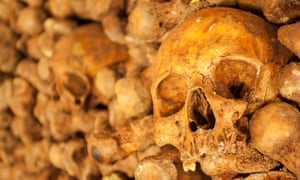 Many also map the quarries, monitor the degradation of historic and artistic features, and look out for stolen items such as old street plates on eBay so they can return them. They even organise cleaning expeditions, or “katacleans”.

“It usually takes a whole weekend,” says Robion. “Every room, corridor and hole is inspected and all junk removed. [Last time] I’d say we collected around a tonne of trash.”

Nevertheless, their activities are still technically forbidden – and they always risk running into the dedicated police officers, or “cataflics” (flic is slang for police officer in French) who patrol the landscape. While the ban was originally introduced during the French-Algerian war, when meetings were strictly controlled and a curfew was in place, it continues today for reasons of public safety. Though accidents are rare, they can happen, and for the insufficiently prepared, getting lost is a very real possibility. 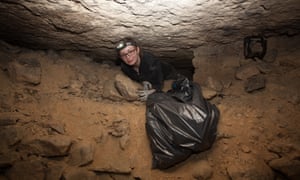 “Generally, the quarry galleries are wet and uneven, the ‘roof’ of the quarry is often in bad condition and the ground can be rugged with rocks, holes and water,” says Florence Cavaillé of the Inspection Générale des Carrières, which still oversees the quarries. “Therefore, only the technical visits made by agents of our service are authorised.”

For now, the official catacombs are the only legally accessible bit, with one small, self-contained section of the wider quarries open for occasional tours: the Carrières des Capucins, located under Cochin hospital and maintained by the non-profit Société d’Études et d’Aménagement des Anciennes Carrières des Capucins as a museum.

“We were lucky to discover, at the end of the 70s, the extraordinary underground system beneath Paris,” says the president of the society, Philippe Thévenon. “We tried at the time to alert the different authorities of its importance, but with no result. So, we did what we felt we had to do: try to preserve by ourselves a fragment of the network for the next generations. Now … it’s the only part of the wider quarries still intact, with many relics dating from the 18th century.” 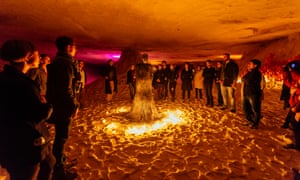 Outside of the official areas, however, the catacomb subculture is flourishing. There are cinema screenings, theatre shows, concerts, secret suppers and swimming expeditions. A recent art exhibition showcased the handmade masks and occult objects of Léonard Condemine by candlelight.

Back at Kataloween, the emphasis is less on occult art than on pumping basslines.

“People meet and have fun; it’s good for the community’s cohesion,” says the organiser, who goes by the name TST. “There’s a huge amount of preparation – and the fact that it’s underground makes everything even more complicated. In the morning, we must tidy up, clean, and take out the equipment and trash.

“But there’s nothing like the feeling when we start up the sound system, everything works and people start to enjoy themselves. Best of all, the night belongs to us.”

Can President Trump Keep U.S. Citizens With Coronavirus out of the Country?