The Bauhaus rises triumphantly from its sleepy suburban setting like an artichoke surrounded by potatoes (it used to be hemmed in by fields that grew the latter). It’s no surprise that a college built to teach people to be creative is a work of art in itself.

Buildings don’t usually have big letters on the side proclaiming what they are unless they’re flogging underpants or burgers. But the letters “BAUHAUS” that run from top to bottom mark the enduring excellence of this brand.

The building in question is a lean, clean, concrete machine. It has white walls, acres of windows to let the light into the studios, workshops and classrooms, and a bridge flying over the street – which was a little trick copied around the world for decades after.

The Bauhaus was a bet – they essentially stuck a tenner down on the future being a wondrous place where we’d all live happily, efficiently and creatively surrounded by beautiful modern design. Walter Gropius – who dreamed up this building, which opened in 1926 – could not have known that the gamble wouldn’t pay off. Within 10 years Germany was steaming towards disaster; the Bauhaus closed, while most of its staff and students fled.

The Bauhaus movement began in Weimar in 1919 as a way of uniting art and craft, bringing together different design disciplines. Its centenary will be marked next year with special events and a number of new museums opening around Germany.

But its move to Dessau was the making of the Bauhaus. This small town between Berlin and Leipzig gave the school space to flourish. When its impressive HQ was built, only farmland surrounded it; now there are houses, schools, shops. Dessau was industrious too. The Junkers Aircraft Company was based here; you can learn more about their story at the nearby Technik Museum. 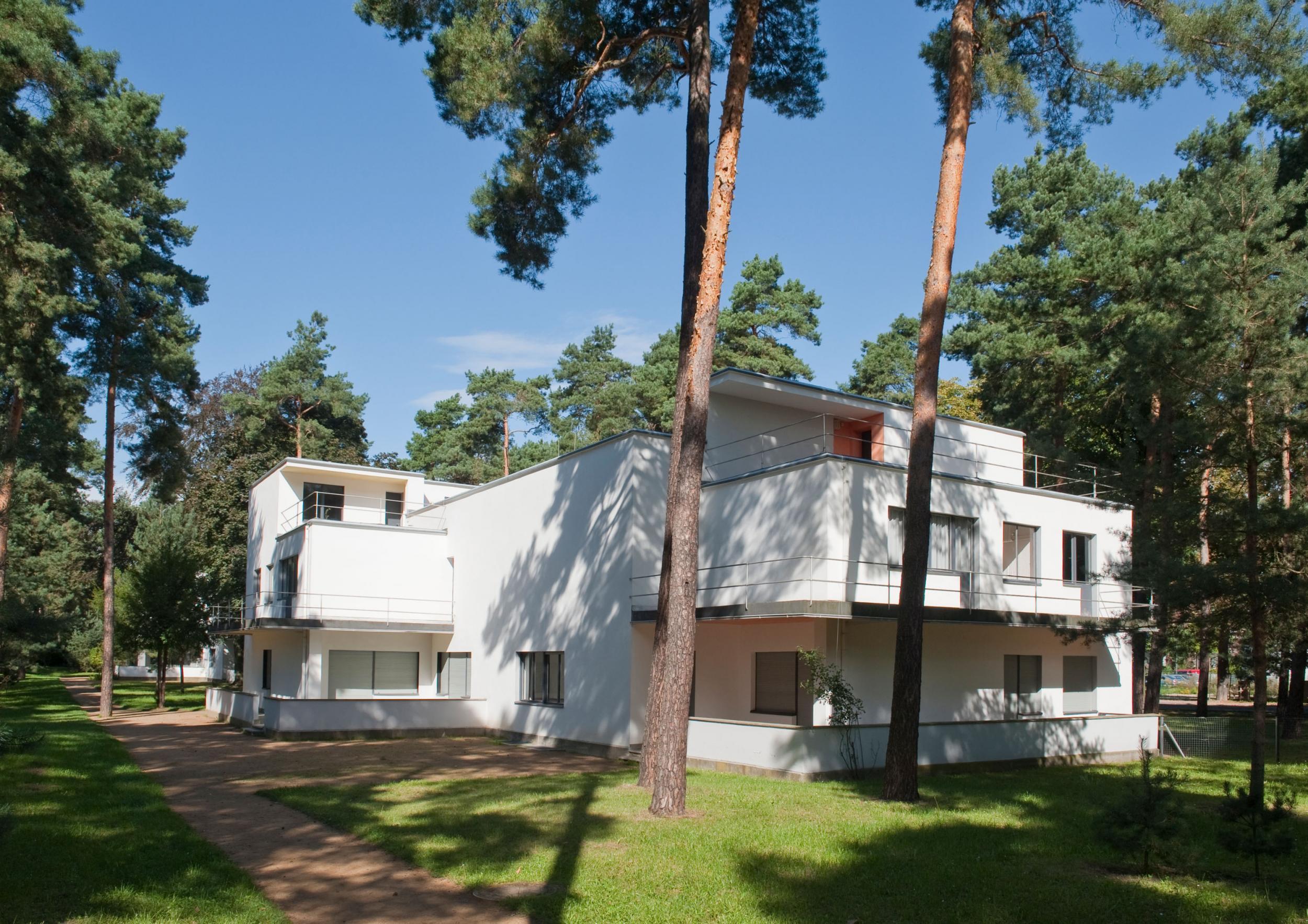 The architecture students and masters got to build what they wanted. So Dessau is filled with other Bauhaus buildings you can walk to, or visit on a guided tour. There’s the Kornhaus Cafe up by the lake with its semi-circular picture window. In the opposite direction is the Törten housing estate with its famous Konsum supermarket.

The best of the other buildings are undoubtedly the Masters’ Houses on Ebertallee, which take about 10 minutes to walk to from the Bauhaus, past the dog groomers and the boarded up bookshop. These four houses were home to, at different points, the icons of the modernist movement. Imagine living in a street where Walter Gropius, Ludwig Mies van der Rohe, László Moholy-Nagy, and painters Wassily Kandinsky, Paul Klee and Oskar Schlemmer lived. They all taught at the Bauhaus. Gropius’s bright, white Tetris-block bolthole doesn’t look like the kind of place you could pop by to ask for a cup of sugar (perhaps a five-hour theoretical argument about how the sugar grains arrange themselves in the cup might be more realistic). But for now you’re free to wander round the gardens and marvel at the houses. A couple of excited students are taking selfies on the lawn as I peer through the frosted windows.

Back at the Bauhaus itself, you can wander the empty corridors looking at the red, yellow and blue paintwork, and peer into the offices and classrooms. The basement museum displays furniture that was designed right here – like iconic anglepoise lamps and various chairs. The Bauhaus even had its own theatre school, which I’d never realised until seeing the photos displayed here of students in wacky fancy dress doing some kind of avant garde performance on the roof. No wonder Hitler blew a gasket and eventually ordered the closure of the place. 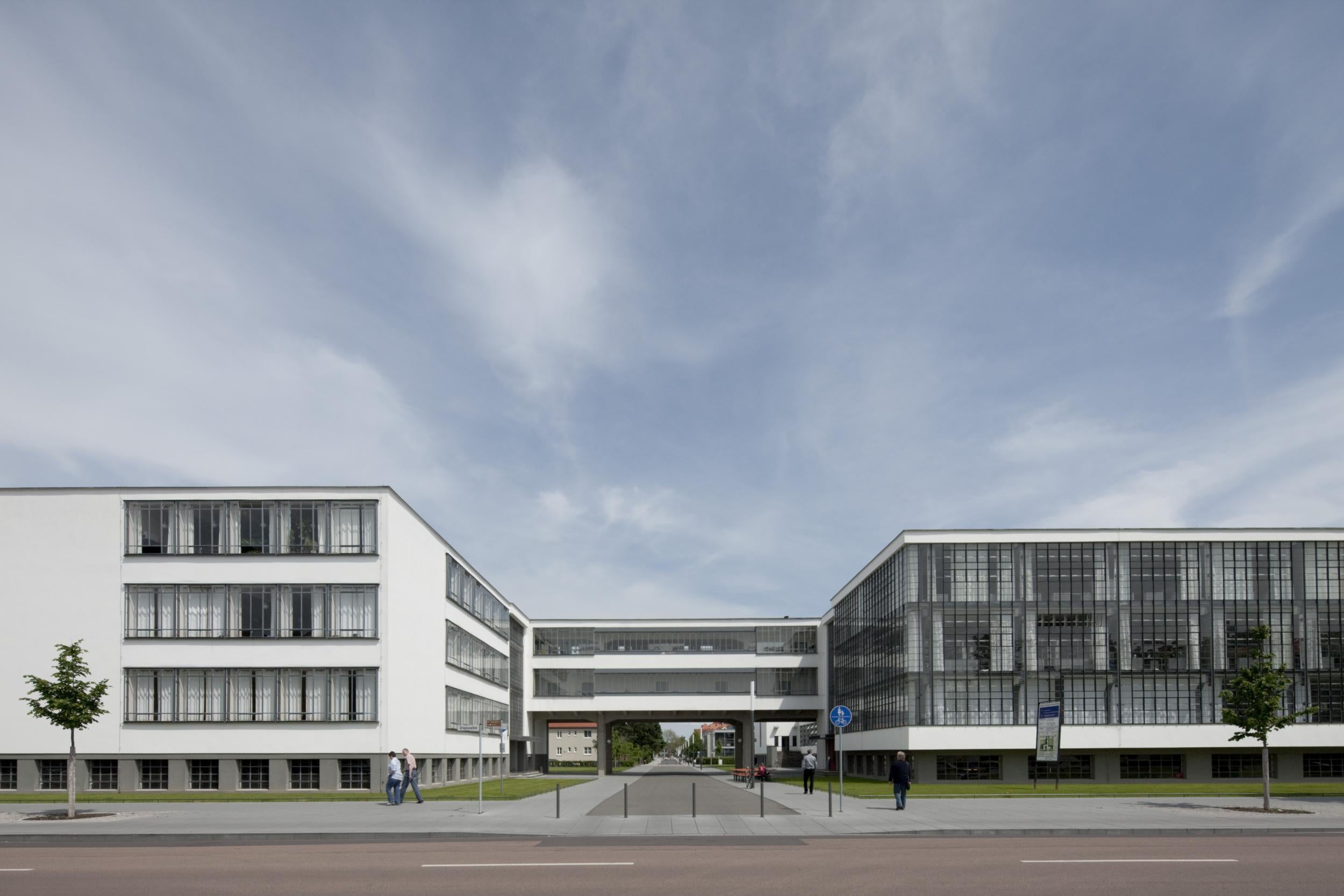 The Bauhaus went on to be led by Mies (who eventually moved to Chicago and shaped the look of post-War America) and briefly moved to Berlin before being shut by the Nazis in 1933. A Bauhaus Museum and Archive remains in Berlin, which is still a nice counterpoint to a Dessau visit. The Archive, near the Tiergarten in west Berlin, will add a new building to expand its own collection, opening in 2021.

Next year – on the centenary of the Bauhaus – a brand new Bauhaus Museum will open in Dessau’s Stadtpark. The £22m museum, designed by Barcelona architect González Hinz Zabala will be used to display all kinds of objects, artifacts and photos that are currently in storage due to a lack of space. In addition, Weimar will also be getting a new Bauhaus museum in 2019.

In the entrance hall of the Dessau Bauhaus building, photos show it at different stages of its eventful life, its ups and downs mirroring those of its home country. In the days of the Nazis, and then the DDR, the building and the Bauhaus legacy both fell into a sorry state. But, fully restored and approaching its centenary, it looks like the Bauhaus has bounced back.

It’s easiest to fly to Berlin; airlines flying from the UK include Flybe, Eurowings, easyJet, Ryanair and British Airways. From there, Dessau is an 80-minute train ride by DB.

A mom of 5 has made $60,000 flipping RVs and spends the money on Disney trips and the kids' college funds