With summer in full swing, many travelers couldn’t be happier as they head to the beach and make plans to maximize all that the season has to offer.

But if rising temps are just not your thing, here’s at least one alternative to keep in mind: Buenos Aires.

The southern hemisphere destination is now experiencing winter, providing a notable escape for those looking to avoid the heat. 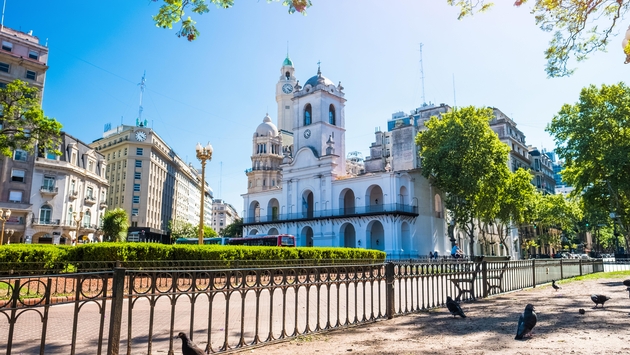 In other words, a last-minute getaway to Buenos Aires may be exactly what your life is missing. Here are some of the notable festivals, events, and openings to put on your radar.

Buenos Aires hosts a comprehensive slate of events during July and August.

This year is the 15th edition of this celebration of Argentina’s flavors, held in La Rural complex in Palermo neighborhood.

The event highlights agricultural routes, and the tastes or “sabores” along them – olives, wine, sweets, yerba mate, fruits, and more, representing Argentina’s agricultural bounty. New routes for this year are honey, nuts, beef and patriotic national dishes like empanadas.

Get your gaucho on at one of the most important agricultural and livestock festivals in the world.

Running annually since 1886, the event hosts animal husbandry exhibits and competitions inside La Rural’s Belle Epoque complex, along with artisanal food vendors from all over Argentina. Meet gauchos, farmers, ranch owners, and others bringing Argentina’s products to the world.

Thousands of tango aficionados from Argentina and around the world descend on Buenos Aires for this multi-faceted event. The festival includes free concerts, performances, classes, milongas, and the Mundial de Tango, the most important international tango championship, which sees hundreds of dancers from all over the world compete for a place in the finals at Luna Park stadium.

This four-day celebration of food and fun at El Dorrego in Colegiales neighborhood, Masticar (which means “to chew”), makes Argentina’s bounty accessible in Buenos Aires.

Well over 110,000 people participated last year, sampling from more than 80 food producers from over 20 provinces presenting fresh, artisanal products from wine, beer, cheese, to honey, mushrooms, and many other food items.

The event gathers celebrity chefs and features cooking and bartending lessons as well as culinary events at restaurants across town.

Travelers seeking liquid warmth will want to make note of the many new bars in Buenos Aires.

Created by the same owners as Nicky Harrison and Uptown, Trade Skybar opened in June in the heart of the Buenos Aires’ theatre district along Corrientes, atop one of the city’s most important modernist skyscrapers. The drinks are spectacular and views even better, allowing visitors to see miles away across the Rio de la Plata to neighboring Uruguay.

Every 15 days, this innovative space located on the 9th floor in the CCK, formerly known as the Centro Cultural Kirchner, invites chefs from the country’s diverse regions to showcase what truly defines their culture and give guests a taste of fresh local flavors.

After undergoing renovations, this historic bodegon, a popular go-to spot among portenos, reopened its doors in May. Located in the renowned Palermo neighborhood, Guido Tassi along with the owner of the notable Don Julio restaurant, Pablo Rivero, are the masterminds behind the new and improved restaurant.

Located on the 16th floor of the iconic Palacio Barolo and overlooking the renowned Avenida de Mayo, Salón 1923 makes an ideal backdrop to capture Instagrammable moments. Guests can sip on handcrafted cocktails while admiring the rich history that dates back to the landmark once known as South America’s tallest building. This rooftop bar opened earlier this year.

Buenos Aires’ first Tiki bar, which opened in February in the Villa Crespo neighborhood, is the brainchild of Luis Morandi and Patricia Scheuer, the forces behind Gran Bar Danzón, Sucre, Bar Uriarte, and other legendary Buenos Aires restaurants. They bring the tiki concept to a new level, with a fusion of Polynesian and Argentine flavors and aromas.

Kids (not just infants!) can now fly for free on Frontier Airlines, but there’s a catch

Moorea or Bora Bora — Which Island Paradise Is Right For You?

How to avoid travel chaos, from airport queues to cancellations

Avoid these 20 things when traveling for the holidays