Trying to walking through the pedestrian zone of Sai Yeung Choi Street South, walkers were always shoulder-to-shoulder, bumping into every other passing person. There was simply no way to avoid fellow pedestrians.

Hong Kong’s Mong Kok area – “busy corner” in Cantonese – is a sea of people, shops and chaotic energy in the heart of the city’s most densely populated district.

Within that, Sai Yeung Choi Street South was the street that never slept. After it was pedestrianised in 2000, the only islands in the sea of people were buskers, singers and dancers, all competing to drown each other out. Commonly known as “noisy street”, you could hear it long before you saw it.

Complaints from residents led the government to restrict the pedestrianisation scheme to weekends and public holidays. Finally, this summer, it was scrapped entirely; after more than 1,000 noise complaints motor vehicles were allowed back 24-7.

With the buskers gone, vehicles are now the noisiest things on the street. The number of people seems the same, though – they’re just squashed onto the pavement to allow the cars through.

“It had become a sort of poor man’s nightclub where competing performers, dancers and karaoke singers were blasting their music at 90-100 decibels,” says Carine Lai, senior researcher of Civic Exchange, an independent Hong Kong public policy thinktank. “To make things worse, there were residential buildings upstairs, so people were complaining of sleeplessness and psychological distress.” 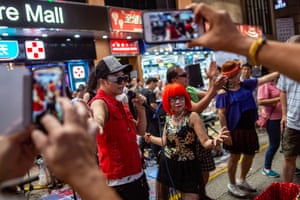 But Lai and others feel that closing the pedestrianised section of Mong Kok is not a long-term solution and does not address the root issue of street management problems in Hong Kong.

“Whenever there were conflicts in the pedestrian zone in Mong Kok, the government always refused to consider alternatives or improvement measures, but simply avoided it by closing the street instead of finding better ways to manage it,” says Kathy Ip, the secretary general of Hong Kong Public Space Initiative.

What is Walking the City week?

As cities around the world close central streets to cars to mark World Car-Free Day, Guardian Cities is looking at the joys and trials of urban walking.

The US humourist and writer David Sedaris tells us about walking in cities from Raleigh to Reykjavik. Will Self explains what he learns from perambulations in London, there’s Fran Lebowitz in New York, Helen Garner in Melbourne, “natural navigator” Tristan Gooley in Portsmouth, and writers on Delhi and Newcastle, Cairo and Wellington.

Laura Laker casts a critical eye on the performance of Vision Zero, the global city scheme to eliminate traffic deaths. London has signed up – will it enjoy the success of New York, or the delays of LA? The recent blocking of Sadiq Khan’s plans to pedestrianise Oxford Street does not bode well.

Correspondent Stephen Burgen samples the newfound silence in the Spanish car-free city of Pontevedra, and Matthew Keegan discovers what prompted Hong Kong to reopen a popular pedestrian street to vehicles.

Renate van der Zee looks at the rise, fall and rebirth of the Lijnbaan in Rotterdam – Europe’s first pedestrianised street – while Rachel Aldred at the University of Westminster crunches the numbers to identify the most dangerous London boroughs for people on foot.

Oliver Wainwright explores the City of London’s forgotten Pedways – and asks whether these 1960s walkways can make a comeback.

We consider the phenomenon of “desire lines”, examine the art of following a stranger in the hope of seeing a city in a new light, and much more.

Ip and other community groups believe the case of Mong Kok highlights the way Hong Kong is lagging behind major world cities in managing pedestrian areas: “We have suggested different modes of street management policy such as performance licensing and sound equipment control guidelines. The government needs to devise a holistic plan, instead of piecemeal approaches towards street management.”

Paul Zimmerman, the CEO of Designing Hong Kong, a nonprofit devoted to improving urban planning in the city, describes the Mong Kok closure as “an absolute failure in walkability”. “The case has dramatically highlighted the failures in Hong Kong’s regime of street management,” he says. “These need to be resolved.”

Hong Kong is renowned for its multi-layered pedestrian networks – at street level, below ground and above ground. These provide the necessary capacity in crowded high-density areas, and provide options that are especially relevant during typhoon season and throughout the city’s hot and humid summers. They also provide great connectivity to mass transit stations. 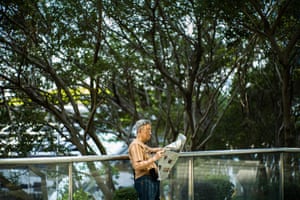 However, they are not always enjoyable for pedestrians to use, say some city planners. “If you just want to move from one place to the other, I guess Hong Kong could be seen as quite an efficient city,” says Mee Kam Ng, director of the urban studies programme at Chinese University of Hong Kong. “But I think we [leave] a lot to be desired in terms of the walking environment and the experience that we could offer to people.”

Ng cites rapid urban development and the city’s many hills as obstacles. “Hong Kong is now over-compact and it’s becoming extreme. The priority [for developers] is to build as many units as possible, rather than creating a pleasant environment for people to live in and enjoy. If we continue to have an urban form that is so unfriendly and so unnatural for our movement and enjoyment it will have a much larger toll on people’s wellbeing.”

“Pedestrians always come as a second thought during development,” adds Ip. “For a better living environment in Hong Kong, the needs of pedestrians should be the priority over the traffic.”

Although it has been slow to come, there are some signs of change. Last year the government announced its commitment to strengthening Hong Kong’s position as a world-class walkable city.

So far, projects have focused on ensuring the majority of future residences and workplaces are situated within walking distance of transportation nodes, services and other amenities, which will be connected by pedestrian-friendly or pedestrian-only walking environments such as precincts and station squares. Areas to benefit from this include the Kai Tak development area, Kwun Tong North and Hung Shui Kiu.

The retrofitting of densely developed urban areas has also been a priority. A number of quick-win pedestrian improvement measures – such as footpath widening and pedestrian signals – have been installed in the Kowloon Bay and Kwun Tong business areas. The government also worked with Transport for London on a HK$3m (£293,000) project to display street signs showing maps and walking guides in the city’s bustling Tsim Sha Tsui shopping district.

Pedestrianisation schemes in other parts of the city – busy neighbourhoods like Causeway Bay, Central, Jordan and Stanley – have been less controversial than Mong Kok. The temporary transformation of a 200-metre section of Des Voeux Road in Hong Kong’s Central Business District into a pedestrian precinct was also well received, with 50,000 people enjoying street soccer, a library, gym, picnic area and music. 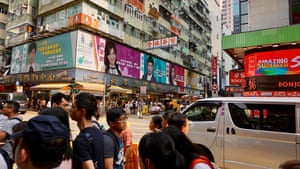 Planners like Ng believe the government should trial these types of schemes more frequently. “I don’t think the government or authorities should just close a pedestrian zone down,” says Ng. “I think our government needs to be more courageous and experimental in allowing the community to experiment with trial and error.”

David Sim, a creative director of Gehl Architects, and his team have worked in China for 10 years designing pedestrian routes in cities like Beijing, Chongqing and Shanghai. “I think it’s important to experiment with this kind of urban change,” he says. “The city and its citizens need to be taken on a journey, and that might be easier if you take smaller steps. It might start with an exceptional event to give people a one-off, new experience – like a street party or sports event – then continue as a more regular but still temporary change, and as the culture and behaviour evolves, the changes can develop further and perhaps become more permanent.”

Sim is quick to add that projects can be quite modest too: “Even a low cost project can make a dramatic difference to urban life. It can actually be cheap to be nice to people.”

Stuba in 2019: Accredited, Updated and Ready to Rock ·