Home » Destinations » ‘Don’t make this rich v poor’: the mothers who won the right for their kids to play together

Sarina Da Silva shows us her phone and laughs loudly. A bit of abuse on Twitter isn’t enough to dampen the mood at this flat in Baylis Old School in south London. The prosecco bottles are being replaced as quickly as they empty, and Da Silva and her neighbours, Louise Whitley and Kate Mearns, are in fits of giggles as they celebrate an astonishing week.

Starting on Tuesday morning after Guardian Cities reported that children in the social housing part of the development were not allowed to use the communal play areas, these women have had an endless stream of camera crews, reporters and photographers knocking on their doors. Some of this has been fun, including an appearance on the Victoria Derbyshire show that the Baylis Old School women went to as a group, bringing 12-year-old Anna with them to describe how she felt looking out over a playground she couldn’t use. “They only wanted a couple of us, but I said it’s all of us or we aren’t doing it,” Whitley says.

Over the course of the week, Whitley has kept a firm grip on the story that the women want to tell. “I told one journalist: ‘You aren’t allowed to make this about rich against poor. This is just about a group of women, all friends, fighting together for children to play.’” 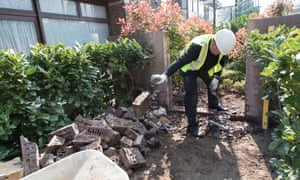 She gestures to her friends. “Sarina works in early years, Kate is a midwife, I’m a researcher. There is no reason any of us should be rich or poor other than by accident.”

Da Silva, who lives with her three children in the social housing side of the estate, Wren Mews, isn’t bothered by Twitter insults – but she is fuming about that day’s episode of the TV chat show Loose Women, in which the presenters said the women and their families had no right to the playground.

“I was shaking with rage,” she said. “They say we should just be lucky to have a home.

“I waited 11 years for my flat, while living in an overcrowded flat full of mould. I grew up here, I’ve always worked, my husband works. I pay £1,200 a month to live in that flat – that’s more than some people’s mortgage.”

She is particularly outraged at claims the families don’t pay service charge. “We pay! We pay every month. We have the same cleaner as the private residents.”

“Yes,” Whitley says. “He climbs over the hedge [which segregated the playground] to get to our flats – it’s the quickest way to get his Hoover over.” And that sets them off laughing again. 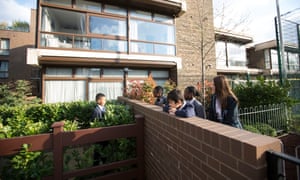 Mearns puts her hand on Da Silva’s knee. “We knew each other from living round here. Then I moved into private and Sarina moved into social. Our children know each other and are at the same secondary school. You know, Lilian Baylis, who this school was named after, would be spinning in her grave – she believed in opportunities for all children.”

There has been some tension on the estate since the story broke. Despite some unpleasant reactions, the women have become local heroes, greeted at the school gate with hugs and cheers.

‘We just play in the carpark’: more segregated playgrounds revealed

Whitley says: “For every nasty comment from a man, I get a hug from the mums at the school gate or other women round here calling me sister. I had a lady in the playground say, ‘Aaah Louise, I see you have been very subversive,’ followed by hugs all round as news got out that we won the right to play together.”

“We said at the beginning of this, even if it’s too late to help us on our estate we are doing this to help others and to make sure developers don’t do this again. This is what women can do when they work together.”

Later, she sends a photo. “Look, the council are here – they’re taking down the wall!”

These Crazy Upside-Down Houses Will Make Your Head Turn