Emissions from diesel cars – even newer and supposedly cleaner models – increase on hot days, a new study has found, raising questions over how cities suffering from air pollution can deal with urban heat islands and the climate crisis.

Research in Paris by The Real Urban Emissions (True) initiative found that diesel car emissions of nitrogen oxides (NOx) rose by 20% to 30% when temperatures topped 30C – a common event this summer.

Certain pollutants from motorcycles – often considered a cleaner alternative to four-wheeled vehicles – were also found to “greatly exceed” averages for both petrol and diesel cars.

Launching its latest report, True said it used hi-tech remote-sensing equipment to measure emissions from more than 180,000 vehicles being driven on roads in the French capital during three weeks in summer 2018.

The tests, carried out with the approval of the city’s mayor, Anne Hidalgo, used a beam of light to analyse the exhaust plumes of vehicles as they passed, with automatic number plate recognition linking the measurement to specific models. More than 370,000 such measurements taken in the UK, France and other countries have been compiled into a new rating system by True. 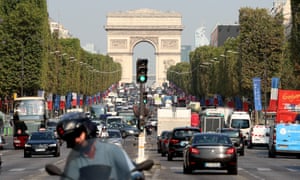 The vehicles were tested on three roads in Paris’s 12th and 13th arrondissements – not the most central – and most were passenger cars and light commercial vehicles. The sample also included buses, motorcycles, mopeds and lorries.

The aim, as with a similar study in London the previous year, was to measure the real emissions of vehicles on the road in a range of different driving and traffic conditions.

The latest findings will come as no surprise to Parisians, who returned to work last week after the long summer holiday. Car lobbies dismiss residents’ complaints about asthma and allergies as anecdotal evidence and contest city hall’s measures to discourage car use in the city centre.

How does air pollution affect the human body?

Air pollution has been described as the ‘new tobacco’ by the head of the World Health Organization. Over 90% of the world’s population suffers toxic air and research is increasingly revealing the profound impacts on the health of people, especially children.

Children and babies’ developing bodies are most at risk from toxic air, with 300 million living in places where toxic fumes are six times above the international guidelines.

A comprehensive global review found that air pollution may be damaging every organ and virtually every cell in the human body. It causes issues from heart and lung disease to diabetes and dementia, and from liver problems and bladder cancer to brittle bones and damaged skin. The systemic damage is the result of pollutants causing inflammation that then floods through the body, and from ultrafine particles being carried around the body by the bloodstream.

In the UK, while deaths attributed to air pollution have halved in the last four decades, most urban areas have illegal levels of air pollution. One in 20 deaths in the UK is still attributable to small particle pollution alone.

Hidalgo, who is seeking re-election next year, has made combating pollution in the capital a key element of her term in office. The Crit’Air system was introduced, obliging all vehicles to have an anti-pollution sticker ranking how clean they are, with the dirtiest categories progressively banned from the city centre. Hidalgo wants to see an end to all diesel cars in Paris by 2024, the year the city hosts the Olympic Games.

When Hidalgo closed the highways along the right bank of the Seine three years ago, critics complained that traffic jams and pollution had simply been shifted elsewhere. This summer, when Paris recorded temperatures above 30C on 20 days, spikes in pollution levels in the city have led to emergency traffic-reducing measures such as banning vehicles with odd-numbered and even-numbered registration plates on alternate days.

Sitting in a café on a busy road opposite city hall in Paris, Sheila Watson of the FIA Foundation, which funded the research, and Yoann Bernard of the International Council on Clean Transportation, which carried out the study, soon noticed the pollution.

“You can smell and even taste it,” said Watson, adding: “Cars are over-emitting compared with the test figures from manufacturers, and this report shows that the scandal still exists.”

Bernard said real NOx emissions had been found to be up to 18 times higher than those recorded in vehicle manufacturers’ tests, even in newer vehicles that are supposed to be cleaner.

He said it was important for vehicle manufacturers to take into account the real-life emissions figures when planning future models. 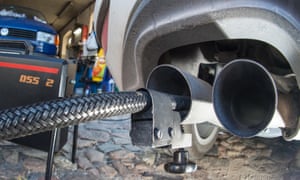 Anne Deguy, a writer who lives and works in Paris, said she notices the effects of pollution whenever she returns to the city.

“I have no problem in the countryside,” she said, “or even when I visit Berlin, but when I’m in Paris I have a runny nose every morning, my eyelids are swollen when I wake up and my eyes start running as soon as go into the street. Frankly, I don’t see what else it could be but pollution.”

In 2017, research suggested that globally at least 38,000 people a year die early due to the failure of diesel vehicles to meet official limits in real driving conditions. Virtually all diesel cars were found to produce far more toxic NOx than regulations allow. This estimated early death toll is on top of the early deaths already believed to be caused by vehicle emissions, which are forecast to reach 174,000 worldwide by 2040.

Since September 2017, new cars have had to pass a road-based test, but an EU compromise with the industry means emissions can still legally be double the baseline limit.

Barcelona’s car-free ‘superblocks’ could save hundreds of lives

Christophe Najdovski, the city’s deputy mayor for transport, launched the report at a press conference at city hall. Earlier, he said: “Paris was the first French city to set up a low emission zone in 2015. [This] study confirms that the diesel ban is the right objective. We could also go further to get clean air back in Paris. This is an objective we should all share.”

Karine Léger, managing director of Airparif, which monitors Paris air quality, said: “The quality of the air we breathe depends on emissions, that is to say, the amount of pollutants released into the atmosphere. But there is no simple connection between the two, given the influence of meteorology and atmospheric chemistry.

“As a result, the one-shot measurement campaign carried out by the True project on a 180,000-vehicle sample in Paris provides important insights. It allows us to go further in interpreting the trends in air quality breathed in Paris with regard to emissions related to road traffic, which remains the main source of pollution in the capital.”

Léger described the rise in NOx emissions at high temperatures as “alarming”.