The two films shown on the opening night of Odeon founder Oscar Deutsch’s first cinema in October 1928 may have been silent – but it certainly got residents of the small town of Brierley Hill in present-day West Midlands talking.

Designed in Assyrian style by a local architect, Stanley Griffiths, the single-storey street frontage of the Picture House featured a pediment of sorts with a sawtooth motif borrowed from ancient Egypt – an architectural style popular in Britain following the 1922 discovery of the tomb of Tutankhamun.

Black Country historian Ned Williams says the auditorium was “the grandest in the area”, and moviegoers hoping to see the German-British comedy crime caper The Ghost Train and Paramount Pictures’ Woman on Trial had to be reassured of the vast balcony’s safety before the showing could begin. 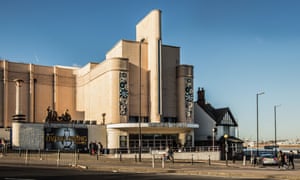 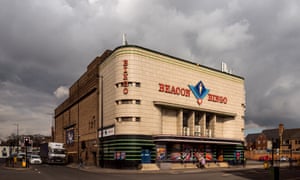 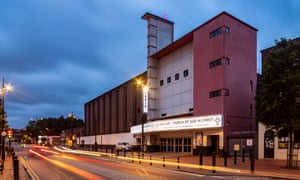 Not to be outdone, the Palace, a rival cinema nearby, screened the 1925 epic Ben-Hur to divert attention.

Neither cinema survives today. The Palace closed in the 1940s and in 1959 the Picture House was demolished to make space for a supermarket. Today the site is occupied by a small parade of shops.

But the Brierley Hill Picture House was just the start for Deutsch, the Birmingham-born son of a Jewish scrap metal worker who had emigrated from Hungary. By the time he died from cancer 13 years later, at just 48, he had opened another 257 cinemas across the UK. 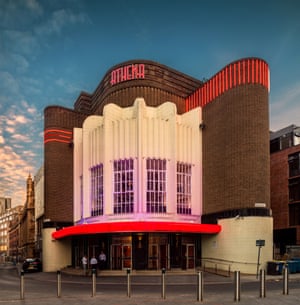 After Brierley Hill, it was another two years before Deutsch opened his next cinema: a building designed in Moorish style by Griffiths and Horace G Bradley at Perry Barr, north of Birmingham.

Deutsch planned it as another Picture House, but the existing Birchfield Picture House objected. He needed a new name, and Mel Mindelsohn, who had worked on setting up the Brierley Hill cinema, had spotted one while on holiday in Tunis: “Odeon”.

It was an ancient Greek word meaning “singing place” – and Deutsch and his team decided it wasn’t too exotic to risk alienating the British cinemagoing public. Additionally, it started with Oscar Deutsch’s initials, and was used to spell out “Oscar Deutsch Entertains Our Nation” in advertising campaigns. 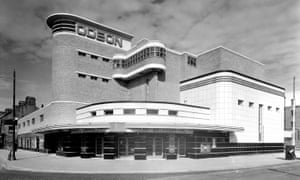 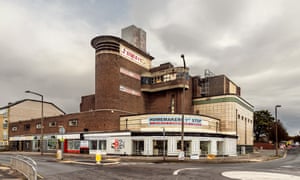 The cinema-opening pace accelerated after Deutsch met the architect Harry Weedon in 1932. Weedon had been in Birmingham making alterations to a factory run by Deutsch’s father Leopold and the cinema boss hired him to work on interiors for an Odeon in Warley, Staffordshire.

Weedon expanded his team of six staff into an office employing 140. Turnarounds were fast. 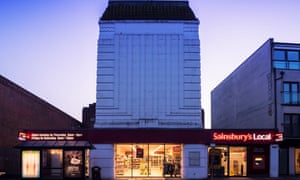 Speaking to Allen Eyles of Focus on Film in 1975, key lieutenant Robert Bullivant recalled a 9pm phone call from Weedon asking him to visit a site in Falmouth immediately. Bullivant drove 400 miles through the night and met someone the following day at 11am. Within three weeks, plans for the scheme had been approved; less than a year later, the Odeon Falmouth was open.

Though they went up fast, Deutsch’s cinemas were by no means slapdash. For many of the towns and cities around the Midlands and along the south coast, where most were built, they were the most exciting and modern pieces of architecture in the area.

This was Odeon at its zenith and its signature styles became well known. Faience, a material that remained unblemished by the smoke and smog of industrial towns, was employed in tandem with rounded corners to complete a streamlined finish. If this couldn’t be done – if the council objected to the plans, for example – then brick was used in an art deco fashion (used for Odeon buildings in York and Chester, for example). A vertical feature, sometimes used for advertising, was another trademark element. 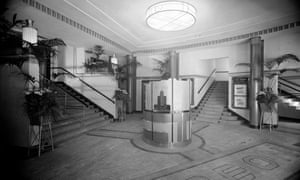 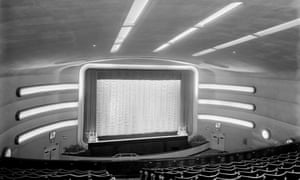 Opening programmes were published that would laud the design of each new cinema and go into some detail on the architecture and the architect behind them. When Odeon’s flagship cinema opened in Leicester Square in 1937, Weedon’s design was featured as a silhouette on the cover. Inside, Deutsch wrote of his “great pride and gratitude … [that] British goods and workmen have erected such a magnificent building … gratitude to the men that designed this theatre and to those that have carried out these designs so successfully.”

In 1940, the year before Deutsch’s death, Odeon cinemas sold 100m tickets, but this level of popularity would eventually wane, as home television and then video rentals took over. In 1984, the entire British cinema industry sold 54m tickets.

As the silver screen fell out of fashion, Deutsch’s cinemas were at risk of coming down as quickly as they went up. 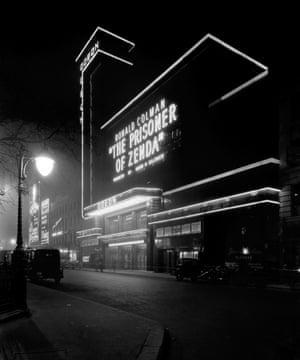 The Odeon Falmouth closed in 1970 and was demolished six years later. Today the site is occupied by a Tesco Metro. In total, 85 of Deutsch’s cinemas have been flattened by the wrecking ball.

Many others have been saved as buildings but now serve another purpose. The 1935 Kingstanding cinema was one of many that found new life as a bingo hall, as did the Perry Barr Odeon before a second transformation to the Royale Banqueting Suite.

When the 1937 Dudley Odeon closed in 1975, owner Rank Leisure attempted to demolish it, but the council blocked the move. The cinema is now Grade II-listed, and used as a Jehovah’s Witness Kingdom Hall.

Rank came up against similar opposition six years later when it tried to demolish the Woolwich Odeon. “We would love to take over the place and run the place … as we feel it should be run,” an impassioned Tom Myatt, a projectionist at the cinema, told BBC Newsnight at the time.

Rank was furious. “I question whether it’s reasonable for private enterprise to put up nice buildings and then be told, when the original use for that building has fallen away, ‘Well, now you can’t get rid of them and do something else,’” protested managing director Angus Crichton-Miller.

Today the old Woolwich Odeon is Grade II-listed but is now known as Gateway House, and is run by the New Wine church.

Seventeen of the surviving 173 Odeons are listed, with 10 of those now used as churches or bingo halls, or standing empty.

“It’s getting increasingly difficult to add listings,” says Elain Harwood, member of the Cinema Theatre Association and historian with Historic England. “[Authorities] feel as if they covered the subject 20 years ago and that enough is listed already.” 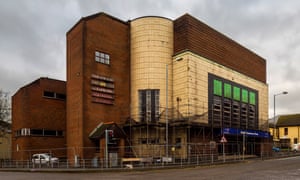 But unlisted Odeons can be subject to radical alterations, or worse. The Odeon at Balham, south London, survived a bomb in 1941 but its auditorium was demolished in 1985 and the building repurposed as a Majestic Wine Warehouse. The impressive faience frontage remains.

The Isleworth Odeon also kept its facade, but has since become the entrance for adjacent flats which pay little respect to the old cinema. Frontages have been retained too at Wrexham and Bristol, but one is an entrance to a nightclub, the other an H&M clothes store.

Sold for scrap: great city buildings that were stupidly demolished

Many more unlisted Odeons are lost forever. Notable cinemas at Yeovil, Erith, Chingford, Colwyn Bay and Worthing have all been destroyed. Most of this demolition work was carried out in the 1980s while the cinema industry was in decline, but the wrecking ball keeps swinging.

The Bolton Odeon was knocked down in 2007 to make way for a hotel and retail complex, and two more – Redhill and Hackney Road – were demolished last year. Ashford is empty and facing possible demolition, while both Llanelli and Lancing are vacant, with their futures in the balance.

Photographer Philip Butler has been trying to capture as many as possible before they disappear. “Unfortunately, since starting the project late last year, I have already missed the demolition of two former Odeons, and there are question marks hanging over at least another three,” he says.

“I may not be able to save them from their ultimate fate, but at least I can produce some fitting memorials in image form.”

Porsche, Bulgari, and other brands cut ties with Chinese star Kris Wu after he was accused of sexual assault