Home » Destinations » City in a city: the 63,000 people who run the world’s busiest airport

When Maynard Jackson introduced affirmative action as mayor of Atlanta in 1973, it “constituted a political revolution in the heart of the south”, according to his 2003 obituary in the New York Times. “Seemingly overnight, it transformed Atlanta into a mecca for talented, aspiring blacks from across the country.”

The centerpiece of his policy? Hartsfield-Jackson airport, at the time a relatively sleepy domestic hub.

The easiest way for him to make an immediate impact with affirmative action was at the airport. He transformed the facility: 45 years later, it is a behemoth, sprawling over 156 acres. For the past two decades it has boasted two-hour flight access to 80% of the US population, and averages 275,000 passengers a day. It is the world’s busiest airport.

It has also effectively made Atlanta into a gateway to the US market, attracting the headquarters of major Fortune 500 companies, particularly transport companies such as Delta Airlines and UPS, and is now Georgia’s biggest employer. Airport officials estimate it directly generates a $34.8bn economic impact for metro Atlanta, with nearly a quarter of a million jobs across the city directly affected, and another half a million jobs indirectly supported across the south-east United States.

“The Atlanta airport is one of the reasons UPS moved its corporate headquarters to Atlanta from Greenwich, Connecticut, in 1990,” says Dan McMackin of UPS. “The fact that we can make hundreds of direct international flights was a major contributing factor in our choice of Atlanta as the location of our global headquarters.”

But the airport also offers something simpler and more direct: jobs for more than 63,000 employees, which helps support a thriving middle class in and around the city. “Work at [the airport] makes mortgage payments and college tuition payments possible,” says Andrew Gobeil from the airport’s office of policy and communications.

Here are a few of those employees. 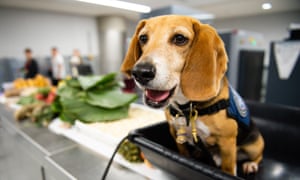 For nearly half his life, Murray has worked eight-hour shifts at the International Arrivals baggage claim, sniffing out contraband from oranges to cow skins. At the age of four, having completed months of training at the USDA National Detector Training Center, the rescue beagle is a quarter of the way into his tenure. “He had a very high food drive and he is very high-energy,” says his partner, K9 handler A Gella. “He’s very sociable.”

Before each shift, Gella swings by Murray’s kennel and picks him up to carpool to the airport. On average Murray sniffs 15 flights a day. He is “nose-centered”, according to Gella: his nose goes up if he smells something. Today, in just one hour, he has already identified three bags from a Korean flight. Each time he has a successful sniff, Murray is treated to a chicken snack and break.

Tasha Mashburn, agriculture supervisor for US Customs and Border Protection 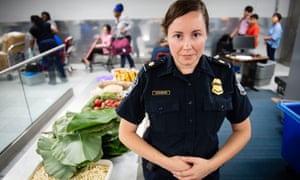 International flights are some of the first arrivals every morning, and Tasha Mashburn is there to meet them on behalf of the US agricultural ecosystem.

“We see something new everyday – and it’s not just the item but what’s inside of them,” she says. “The items you would never think would have an insect inside.”

Pests, like the Mediterranean fruit fly she once found, could cost the US billions of dollars if they infiltrate the country.

But not all food is confiscated and thrown away, Mashburn says. They just want a closer look.

“These insects have developed camouflage over thousands of years to not be seen. It takes some effort and skills to find them.” 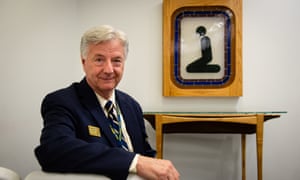 As he enters the nondenominational chapel located in Concourse E, Adrian M Neely picks up a Bible and a Book of Mormon left lying on a table and discreetly slides them into a drawer.

“Because it’s interfaith, I don’t want Hindus or Buddhists to not feel comfortable,” the chaplain says. “It’s not just a Christian worship center. All are welcome.”

Markings on the wall direct Muslim worshippers east toward Mecca, and there are no religious icons to identify the room – instead, there is a universal image of a person kneeling.

Hartsfield-Jackson has not one but three chapels, staffed primarily with volunteer chaplains who Neely now oversees after volunteering himself for five years.

Part of his job entails dealing with passengers who die on flights: the “saddest situation”, he says, explaining that his role in those cases is generally to spend time with the family who might be waiting. But he also gets calls from airlines when there are upset passengers or misconnections, or when people need assistance with prayer.

One Muslim man leaving the chapel asked Neely to pray for his family. “Seven feet tall, a teddy bear of a guy,” Neely recalls. “He had gotten his family out of somewhere dangerous, but said he couldn’t get his 18-year-old daughter out.” The chaplain said he was Christian, and asked if that was OK. The man nodded, and the two held hands and prayed. Neely looked up afterwards to see tears on the man’s face. “I don’t think he cared what flavor I was.” 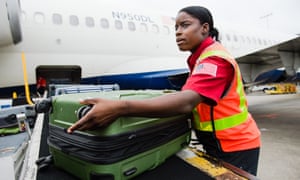 Planes don’t reverse by themselves. Each one has a Charlessa Brightwell.

Before a plane takes off, Brightwell ensures it has the right weight balance of luggage and people, and hooks the plane up to a cart to manually push it away in reverse before it can taxi.

“I love pushing back planes when it’s time for departure. I love the physical work, especially in the summertime,” she says, flexing a muscle. “It’s like a gym membership you don’t have to pay for.” 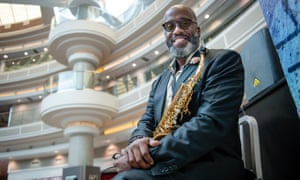 “Some people walk past and think, ‘Poor guy, he’s playing at the airport,’” laughs Ron James. “Here’s a dollar!”

James is a professional musician, paid to play the saxophone at Hartsfield-Jackson every Wednesday for four hours. He landed the job after an audition. “The judges told me it was my tone and how mellow it was,” he says.

His favorite part is the constant movement. “Somebody’s screaming at a kid, somebody’s dancing, somebody’s running by trying to catch a plane, it’s always something.”

He learned early on not to play anything too upbeat in the atrium, which he calls the “frustration area”, where people waiting for transfers or missed flights will give him dirty looks unless he plays soothing music. But anything goes in Concourse B once people have made it through security – within reason.

“Steely Dan always gets a good reaction. Anything from Earth, Wind and Fire,” he says. “Oh, and people love Norah Jones.” 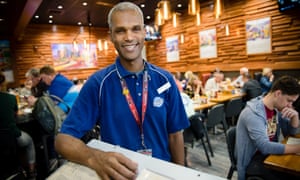 He was just a teenager when he walked into the atrium 19 years ago and asked the first person he saw for a job. His first role was washing dishes. Then he moved to cooking, then to the bar, and now to the role of waiter at Blue Moon. “I got my first paycheck here,” he says. “This is one of the busiest terminals and I love the fast pace.”

He says customers from New York have offered him restaurant jobs that would have paid three times as much, but he can’t leave his second home. “I meet a lot of people from all over the world and I’ve seen this airport change so much. I grew up with it. Why would I leave?” 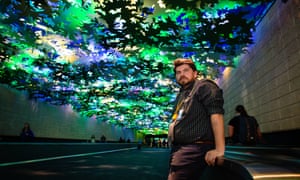 Benjamin Austin stands on the moving sidewalk and looks up at a 450ft-long mimicry of a Georgia forest: leaf forms cover the ceiling, LED lights create sunshaft effects that mimic clouds, and you can hear a steady hum of insects and chirping birds.

The work, called Flight Pass, is one of several dozen curated by Austin as one of two art managers at Hartsfield-Jackson. He has brought in sculptures from Zimbabwe and set up a tribute to Martin Luther King Jr. “There are permanent, large-scale commissioned art[works] such as Flight Pass, intended to be at the airport in perpetuity, and those that are on rotation typically on a year basis,” Austin says.

The program has been around since the 1990s but Austin is helping expand it. “We’re reaching out to museums and art organizations, asking them to curate exhibitions for our spaces,” he says. “The art program is a cultural welcome mat to Atlanta.”

His dream project? Installing a free movie theater in the airport to showcase the work of film-makers from Georgia. 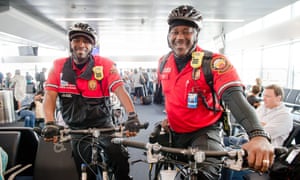 Each morning, the fire department’s Rayshawn Allen and Kendall Gavin report to the EMS room in Concourse F to get their bicycles.

One bike carries oxygen, the other the blood pressure and IV machines. The medics work in pairs: “we’re more efficient that way,” says Allen, who spent 10 years with the Atlanta Fire Department before giving it up to volunteer at the airport.

There are four bike medic teams spread across the airport, each covering two concourses. The bikes are first responders: they can reach a call quickly and triage it before dispatching a fire truck.

The wildest call Allen has received was about a naked woman running through the airport. “She said somebody was trying to kill her,” he recalls. “The call came out at B22 and we found her at B5 in the jetway. We evaluated her, she didn’t put up a fight and she was sent to the airport. We didn’t know where her clothes were, so we covered her up with a blanket.”

They also help with cardiac arrests – as well as whenever one of the more than 30,000 women who work at the airport goes into labor unexpectedly. “I like the supportive care instead of fighting fire,” Allen says. 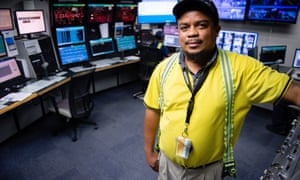 Tisdale works underneath the airport, in a control room that coordinates 86 technicians and 11 trains. The shuttle, which connects the concourses and baggage claims every 108 seconds, carries an estimated 50,000 people a day.

And every day a passenger blocks those doors, shutting down the shuttle, requiring technicians to dispatch and reset the train, and throwing the entire schedule off track.

“We don’t have any other problems,” Tisdale sighs.

A Peek at the new Finnair Premium Lounge ·