It’s early evening in Jamaica and I’m sitting cross legged in a room with 20 other women aged between 25 and 75. Everyone has a bottle of water; some have headphones, earplugs or a pillow. We’re sitting under a structure painted in tropical greens, pinks and purples, and outside it’s pouring warm, torrential Caribbean rain. I watch droplets run down palm leaves and drip onto the concrete floor while a heavily pregnant woman in a long dress chats with everyone, asking them how they’re feeling and what their previous experience is with the practice we’re about to start. Some of us are sitting on yoga mats, but we’re not in a yoga class. I’m on a women’s only magic mushroom retreat with MycoMeditations, and the woman is an experienced psychedelic facilitator and researcher called Katherine Maclean.

It’s been over 50 years since the Summer of Love but psychedelics are finally being taken seriously again. In 2017, researchers at Imperial College London discovered that psilocybin (the active ingredient in magic mushrooms) may have the potential to “reset” the brains of depressed patients. Another study – of which Katherine is the author – found that it can make people more open to new experiences, more forthcoming about their feelings and more creative.

​MycoMeditations is open to those who suffer from depression, anxiety or trauma, as well as those who don’t – but none of us are here to “party”. We’ve all come with intentions and issues in our personal or professional lives that we want to explore.

MycoMeditations is based around Treasure Beach – a less touristy part of the island than Negril and Ocho Rios and known mostly to backpackers and bohemians. It’s a three hour drive from Montego Bay airport, along rural roads lined with brightly painted houses, ramshackle restaurants and colourful fruit stalls. MycoMeditations’ founder, American Eric Osborne, first came to Jamaica 15 years ago and has been building relationships in the area ever since. Guests stay at the local Taino Cove hotel, but during the mushroom sessions and at mealtimes, a woman called Doreen and her family are our hosts. Throughout the week we enjoy meals of home cooked plantains, rice and beans; locally caught fish, and fresh guava juice. 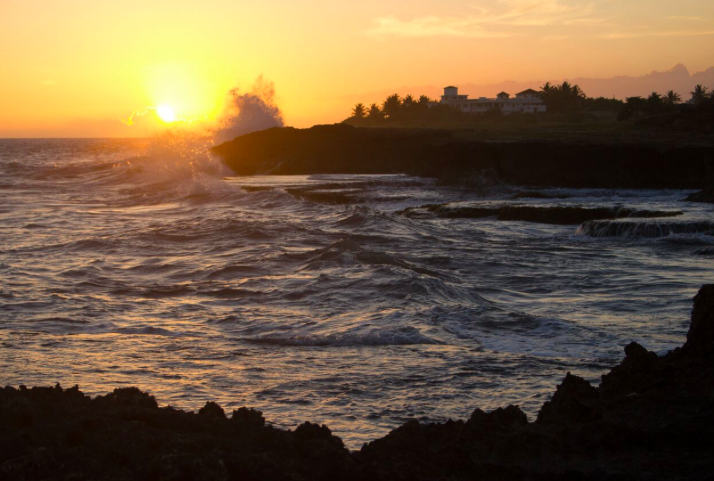 It’s beautiful here, of course, but there’s a more practical reason for holding the retreat in Jamaica. MycoMeditations allow people to experience psilocybin in a supportive and – crucially – legal setting.

This is the first time they’ve had a women only retreat. “The #MeToo movement has demonstrated how common sexual harassment and abuse is in our society,” says Maclean. “We wanted to create a space that was super safe, and hospitable to women – especially women who are suffering from trauma or other things that they might not feel comfortable exploring in a mixed setting.”

Throughout the week we will have three mushroom trips, each lasting between four and six hours. Experts say there are no direct physical risks from taking magic mushrooms, so although there are several people present with doctorates, there’s no medical doctor. Amongst the six (sober) facilitators is Rosalind Watts, a clinical psychologist at Imperial College London who was on the research team for the studies on psilocybin for depression. They’re here to provide expertise, comfort and support – and to make sure no one wanders off.

The mushrooms are grown nearby, dried and ground into a fine powder before being decanted into capsules. Once I’ve taken my dose, I lie down and try to relax. After about 40 minutes I start to notice subtle changes to my senses. My eyes are closed, but the sounds of the crickets, frogs and wind through the trees begin to form a beautiful melody. I breathe deeply and the pungent smell of wet earth fills my lungs. To start with, the experience feels playful – laughter washes over me and I feel giddy and happy. Shapes dance in front of my eyes – until suddenly, and without warning, I start to cry.

I curl up on my mat, feeling like a frightened child, snot streaming from my nose and despair coursing through me. In the middle of it, I suddenly feel a clarity that the anxiety I feel in my day to day life is caused by fear – mainly fear of the future – and I tend to beat myself up about it. The realisation gives way to a kind of bliss – as if the adult in me is reaching out to the child, telling her that it’s alright to be scared. 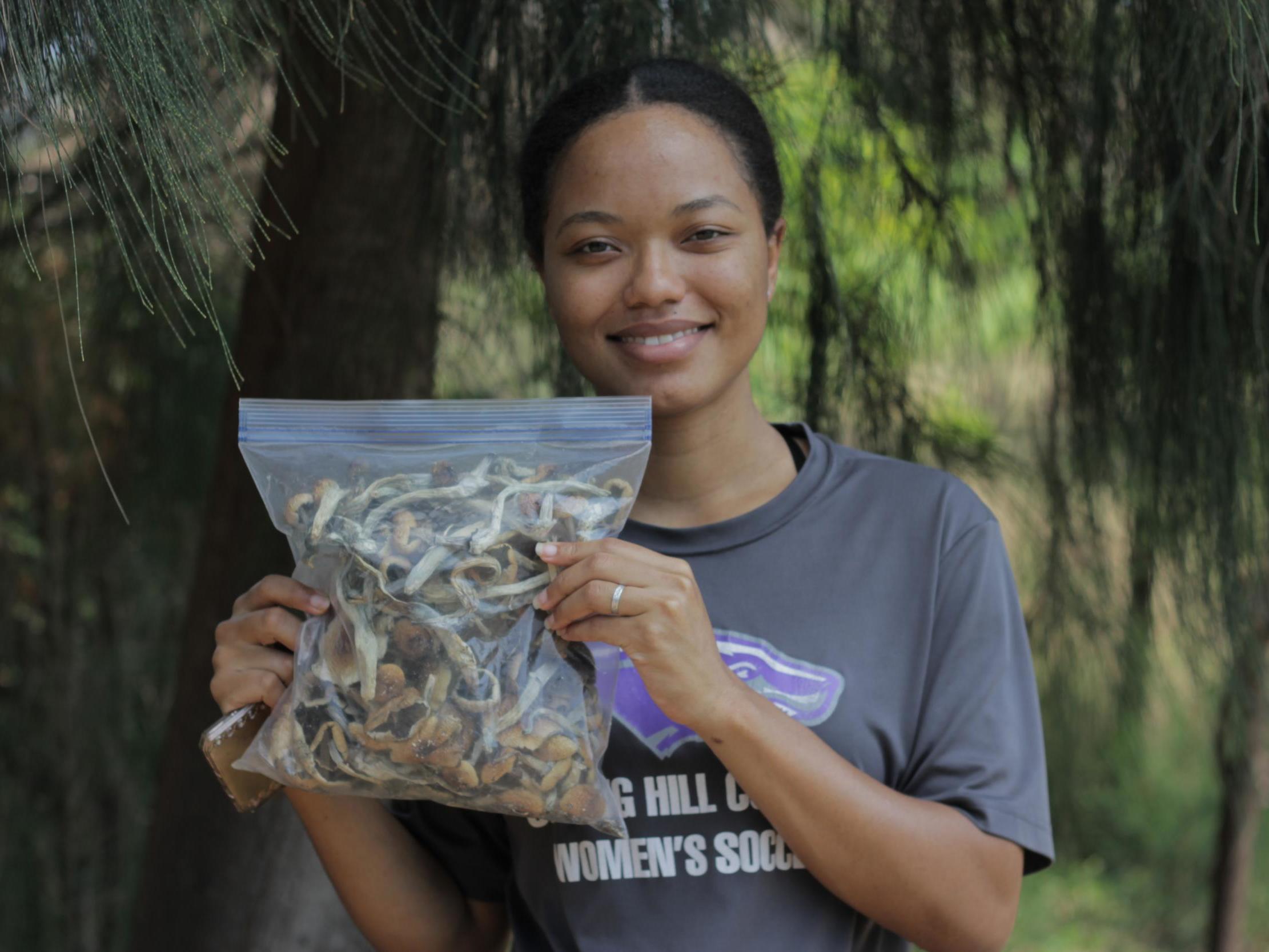 After about four hours, the effects of the mushrooms have mostly worn off and I feel it’s time to return to the real world. Some of us migrate to a campfire to share our experiences. One woman describes how over the course of the evening, she felt that she received a strong message that the universe was demanding universal love of her. She realised, she says, that to make room for this universal love, she must give up her grief around the declining health of her mother and husband, in order to fully love them.

What’s more, in order to embrace universal love, she’s decided to give up two of the qualities she previously felt most defined her: compassion and caring. “I realised that being overly concerned with the logistics of caring for my sick loved ones was my way of guarding myself against the feelings of pain and loss,” she says. “It’s like limping to guard my leg – it just distorts the rest of my body and prevents me from truly connecting with them.”

Throughout the week, I’ll learn that what happens outside of the three mushroom trips we take is just as important as the trip itself. Integration – the process of sharing and reflecting on how your new perspective can be incorporated into everyday life – is crucial. “It’s like going to the moon – everyone forgets that it’s not just about getting there, you have to get back safely too,” is how Eileen Hall, another facilitator, describes it. 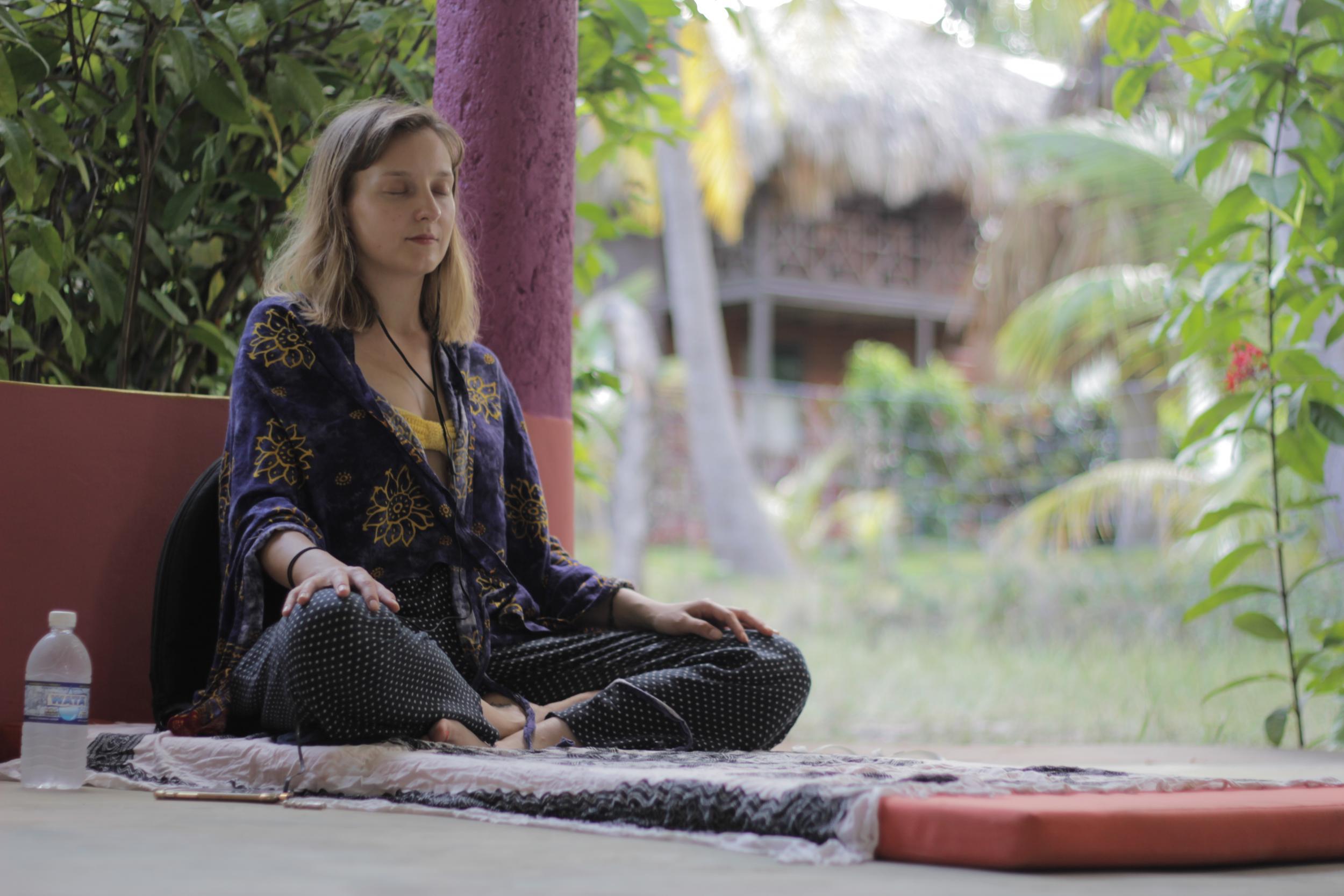 Between each “trip day” we have one day off for relaxing and integration. Everyone gets the opportunity to have a herbal steam massage and, one day, a smaller group of us visit a local waterfall. Unsurprisingly, most of us are keen to talk about their experience. As well as informal chat, there are dedicated integration meetings that allow us to share as a group too. There is a general consensus that the experience with the mushrooms has “unplugged” emotional blockages, some of which have been festering for years. “Why didn’t I do this 20 years ago?” exclaims one woman at dinner, to applause.

On the last night in Treasure Beach we have another fire. The moon is nearly full, and the night feels open and alive. We stand in a circle and everyone takes it in turns to throw a piece of paper with a word or feeling that they want to leave behind into the flames. Some people read a favourite poem aloud. As I watch my contribution unfurl and blacken, the word I’ve scrawled there is visible for a moment before disappearing forever. It says “fear”.

Magic mushrooms are proscribed Class A drugs in the UK. Side effects can include bad trips, worsening mental health issues or poison from eating the wrong mushroom. For more information, see talktofrank.com

Virgin Atlantic flies from Gatwick to Montego Bay from £574.

Forsythe takes top sales role with Europcar in the UK

A guide to the best airport hotels in the UK