Willy Wonka may be the most famous fictional chocolatier in the world, but it was Milton Hershey who brought his chocolate dreams to life in the real-world. He turned a small dairy farming community in Pennsylvania into a chocolate boomtown bearing his name and a nickname that still rings true – the Sweetest Place on Earth.

To truly understand Hersheypark, it’s important to get to know the man who built it. Hershey had a successful caramel business, but after seeing chocolate-making at the World’s Columbian Exposition in Chicago in 1893, he was smitten. He sold his Lancaster Caramel Company and set about building a modern candy-making facility in Derry Church, the dairy town he grew up in, which he knew could provide him with plenty of the milk needed to make his sweets.

The Hershey Company opened its doors in 1905 and soon Hershey was busy reinventing the chocolate market. Before he came along, milk chocolate was a luxury product made in Switzerland and imported to the States. Hershey’s mass-produced candy may not have been as refined as the Swiss bar, but he was able to make chocolate that was accessible to everyone, not just the wealthy.

As the business grew, so did Hershey’s dreams. He wanted his company to make an impact not only nationally but locally, too. He set out to build a model community and mostly succeeded at it, creating a trolley system to transport his workers and building housing for his employees, schools for orphans, parks for children, and even churches for their Sunday worship.

Hershey so wanted his employees to be happy living in the little town that was sprouting up that in 1907 he built Hersheypark, a 121-acre amusement park, as a perk for his chocolate factory employees. It has been entertaining sugar-filled crowds ever since. 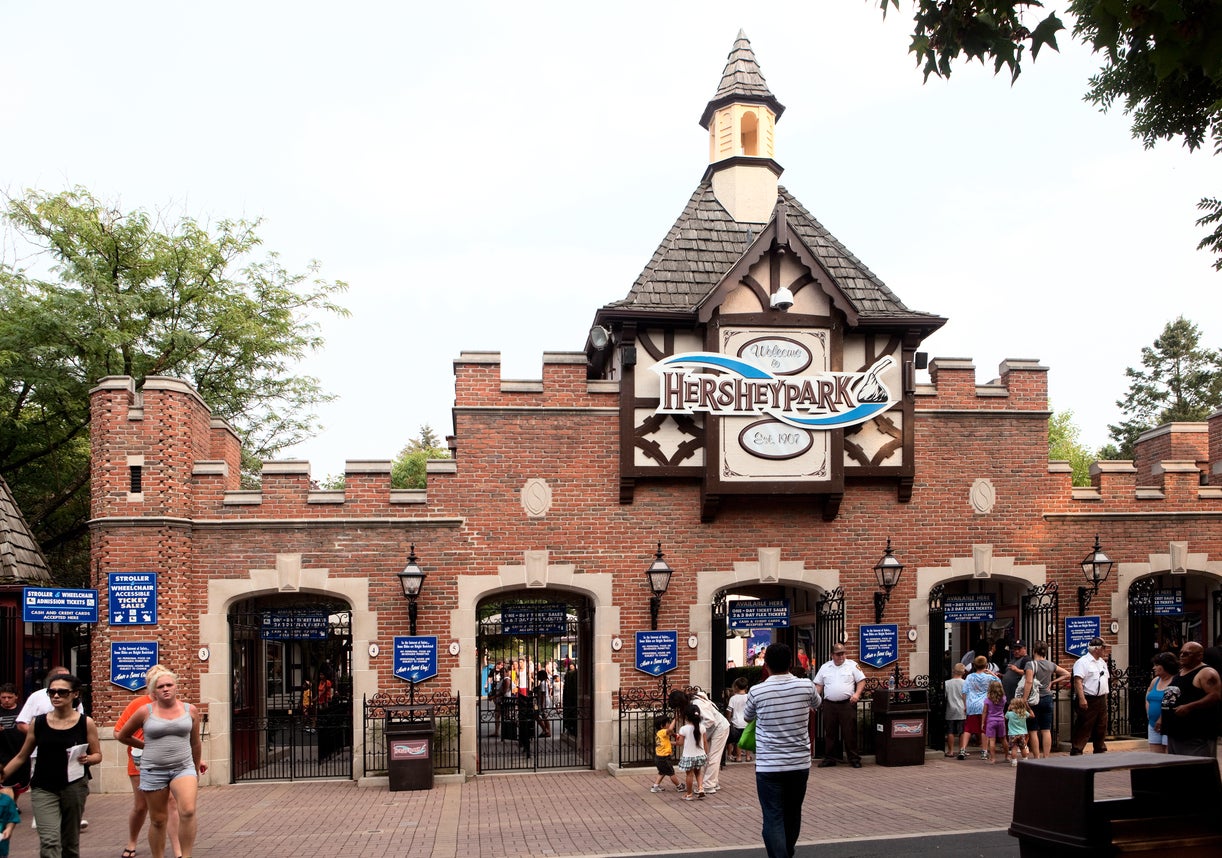 While Hershey’s benevolent sweetness built the park, it’s the sugary kind that keeps it running. His chocolate and candy business boomed and today people from around the world come to see where their Hershey bars, Twizzlers, Reese’s, and Almond Joy are made.

Candy is everywhere in the park, not only at the food stands and gift shops, but in the way kids are measured for rides (Jolly Ranchers can ride this ride!) and the autonomous York Peppermint Patties, Rolos and boxes of Hershey’s Cocoa that wander the park posing for pictures with visitors.

These days, what started as a way to entertain workers on the weekends is now a full-on theme park, with 70 rides including 20 kid rides and, come 2018, 14 thrilling roller coasters. Highlights include the classic double loop Sooperdooperlooper and the Fahrenheit, which sends cars shooting forwards and backwards in a series of terrifying twists. When summer rolls around this year, the park is adding a water coaster into the mix, plus the world’s first HydroMAGNETIC coaster, which sounds terrifying.

Hershey is still all about chocolate though, and it’s the star of the show at Chocolate World, which serves as a welcome centre, gift shop and food court all rolled into one chocolate-soaked experience.

The whole experience induces a giddiness that is part sugar high, part pure, childish excitement:  take a ride on the Hershey’s Great American Chocolate Tour for a trip through a virtual Hershey’s factory that shows how chocolate is made from bean to bar; throw down a few bucks to play Milton Hershey and make a custom chocolate bar of your own; go on a guided tasting adventure; or help a talking Reese’s Peanut Butter Cup solve a mystery in the 4D theatre.

The Chocolate World gift shop, meanwhile, would make Willy Wonka green with envy. It’s near impossible to make it out of there without buying a two-pound bag of Hershey’s Kisses. 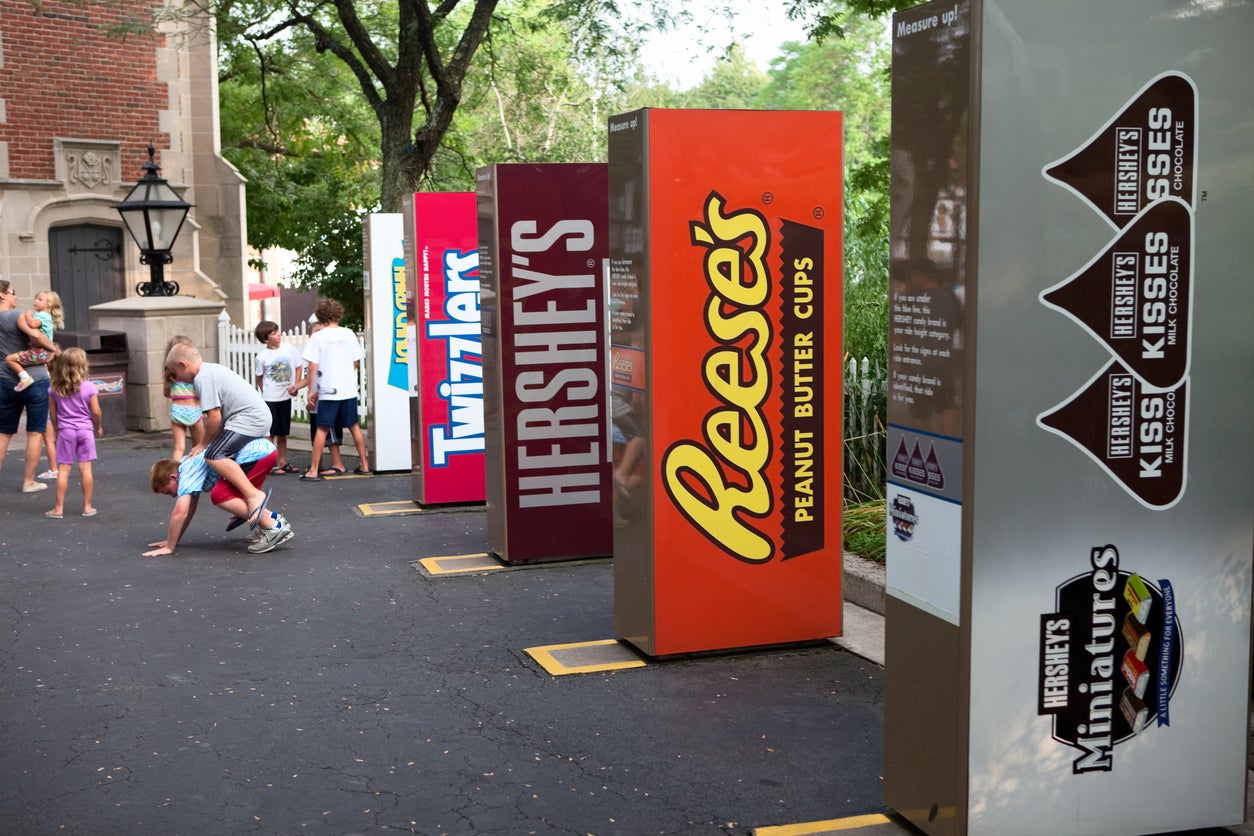 If you find yourself overdosing on sugar (and the sugar-fuelled crowds), the best place to find respite is in Hershey Gardens. Created by Milton Hershey in 1937, they’re home to 275 different varieties of rose, curated in elegant themed gardens. Lest you forget where you are, in the children’s garden there’s a particularly Wonka-esque touch – chocolate-scented plants.

When the sugar buzz crashes, retreat to soothing Hotel Hershey, which was constructed during the Great Depression – yet another of Hershey’s schemes, this time to provide jobs for locals. It now serves as the hub for out-of-town guests and, with its potted palm trees, fountains, arched balconies and blue sky-ceiling, it feels like a Moroccan oasis in the middle of Pennsylvania dairy country. 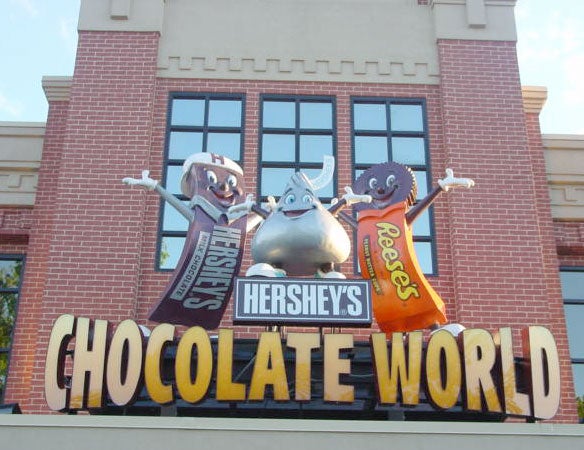 The Hotel’s spa extends the illusion and wraps it in chocolate – cocoa baths, chocolate sugar scrubs and cocoa massages are all on offer.

The park and all the wonders it holds are the real-world extension of Milton Hershey’s pure imagination. He just wanted to create a place where people would enjoy themselves on a day off – and boy, did he succeed. After all, how can you feel bitter in the sweetest place on earth?

British Airways (ba.com) flies direct from London Heathrow to Philadelphia from £576 return. The park is just under two hours’ drive from the airport.

Cruise holidays: Save ‘lots of money’ and stay in a suite with cabin booking hack