“This street sign is crooked,” notes Henny Koot, then stoops down to straighten it.

We are in Spoorwijk, a neighbourhood in The Hague. “Spoorwijk is a very special neighbourhood. It’s a green space where children can play safely in the playgrounds, where entrepreneurs from different cultures have set up shop. People care about each other,” explains Koot, who chairs a local community organisation. Spoorwijk may be a caring neighbourhood, but the it’s part of Laak, The Hague’s smallest district – as well as one of its poorest and most diverse. The average annual income of its 6,500 residents is €16,300 (£14,225) – about €1,350 (£1,180) a month. In 2017, 67.3% of the inhabitants of Spoorwijk were of non-Dutch background – the majoritymost from Surinam, but also many from Turkey and Moroccofollowed by Turks and Moroccans.

Like many urban areas, Spoorwijk has some obvious superficial problems like damaged infrastructure, noise pollution, speeding cars and flytipped rubbish. But the Dutch are big on what they call meedoen, to participate, and with this in mind, instead of individually complaining to the local authority or putting up with issues, the residents of Spoorwijk have found an active way to resolve neighbourhood gripes together.

Every three months, locals gather to take a wijkwandeling – a neighbourhood walk. Together, they visit problematic areas and discuss what action should be taken. Any resident can turn up and take part, and about ten to fifteen participants of all ages and social groups usually come along.

“Engaged citizens take care of their neighbourhood and their neighbours. They don’t feel indifferent, because they experience positive change as soon as they are asked for their ideas, suggestions and opinions,” explains alderman Rachid Guernaoui, a member of the The Hague’s city hall.

I joined Spoorwijk’s June wijkwandeling. The route differs each time, and is determined by residents, who can email organisers their complaints and requests in advance or mention issues along the way. 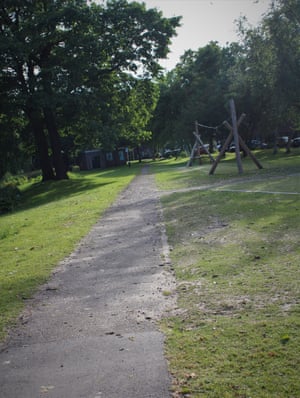 If a problem can be fixed on the spot – like straightening a crooked sign – it is. If not, a request for action is sent to the municipality via a community action list. While a single citizen may not have the time to make sure their complaint has been considered, Spoorwijk’s community group sends a follow-up after six months if their request has gone unanswered.

But the walk is not all about problems. It’s also a chance to exhchange ideas, joke, laugh and discuss the neighbourhood. On my walk, as well as local residents there are two men from the nearby Laak Centraal neighbourhood who want to introduce the concept of wijkwandeling into their own district. There are people from the municipality who want to find a better connection to the community they serve, and from organisations such as Stichting MOOI, which helps people in need but also runs various cultural events. Representative Meysur Bijl talks about her organisation’s new projects, including a food festival. Spotting grapevines growing in front of one of the houses, she explains how to make sarma: vine leaves stuffed with rice, then demonstrates how to fold the leaves.

After the walk, everyone’s invited for refreshments, providing another opportunity for residents to get to know each other. There are positive words as well issues raised. “Thank you so much for the new park, thank you to everyone who made it happen,” says community organiser Carlien Nijbroek.

Koot takes the opportunity to pass on information about a new renovation project which will affect a nearby street. There is talk of other improvements: new benches here, a water fountain and an additional rubbish bin there. Larger projects, such as the need to lay new pipes, are being tackled as well.

Although individual wijkwandelingen are hyperlocal events, they take place in neighbourhoods in cities all over the country, making them an effective motor for change. For example, as a result of a small-scale citizen initiative, Kraayensteen, another Hague district, has been granted almost €1.9m euro for opknapping (beautifying) the local area, and Spoorwijk itself has been granted around €50,000 euro to spend on local projects.

One of the most important things a city’s governing body can do is to promote “genuine dialogue, transparent city management and open communication with citizens always and everywhere,” says Guernaoui. And key to this is “taking both big and small topics as important” – an approach that the wijkwandeling movement exemplifies.

Back on the wijkwandeling, a new generation of Spoorwijk citizens is already learning that speaking up can make a difference.“What are the things you don’t like in your neighbourhood?” one Spoorwijk mother asks her five-year old son. “The geese poop,” he replies.

And the best thing? “Playing at the [new] playground.”

How This Fair-trade Hair and Skincare Brand Is Making a Difference in West Africa and the U.S.

16 of the World's Best Places to See the Northern Lights

This Luxury RV Resort in California Has On-site Wine Tastings, Stone-fire Pizza, and a Wellness Center