I was woken up, suddenly, by the guttural roar of a dinosaur. It sounded close – just metres away from the small hut where I’d been sleeping.

I had spent the night in the heart of a real life Jurassic Park: Phu Wiang, a little known national park in the often overlooked northeastern corner of Thailand. This nook, squeezed up against Laos to the north and Cambodia to the east, tends not to attract many tourists. It has neither white sand beaches nor tropical islands; no majestic karst mountains and no sprawling temples.

What it does have is a sideline in exuberant dinosaur tourism. A stomping ground for dinosaurs in the Jurassic and Cretaceous periods, the provinces of northeast Thailand are home to one of the world’s largest dinosaur graveyards as well as museums and jungles where fossilised footprints soak up the splashback of waterfalls. The people of the Isan region promote this with typical Thai abandon: monuments to the dinosaurs, garish, enormous and Disneyfied, crowd every public space.

I happened upon this wacky corner of Thailand by accident while cycling, en route between Laos and Bangkok. One hot afternoon, at the foot of a steep climb, I pulled my bicycle into the shade of a stegosaurus near the village of Nong Bua. The dinosaur was part of a sculpture garden at the foot of a steep, forested hill; at the top, in the Nong Bua Lam Phu Fossil Museum, an animatronic T Rex bellowed while I recovered in the welcome air conditioning.

The museum’s maps revealed that Phu Wiang National Park, sprawled over a horseshoe-shaped mountain nearby, was among Southeast Asia’s finest dinosaur sites. I cycled to it through quiet rice paddies and forests, rode puzzled circles around a roundabout overrun by wizened dinosaur statues, then took the highway that ran between the arms of the horseshoe. As the national park opened up before me, its forested slopes climbing around me on all sides, I rode beneath a blue sign emblazoned with grazing dinosaurs: Welcome to Phu Wiang National Park. It wasn’t quite as impressive as the entrance to Jurassic Park, but it wasn’t far off. 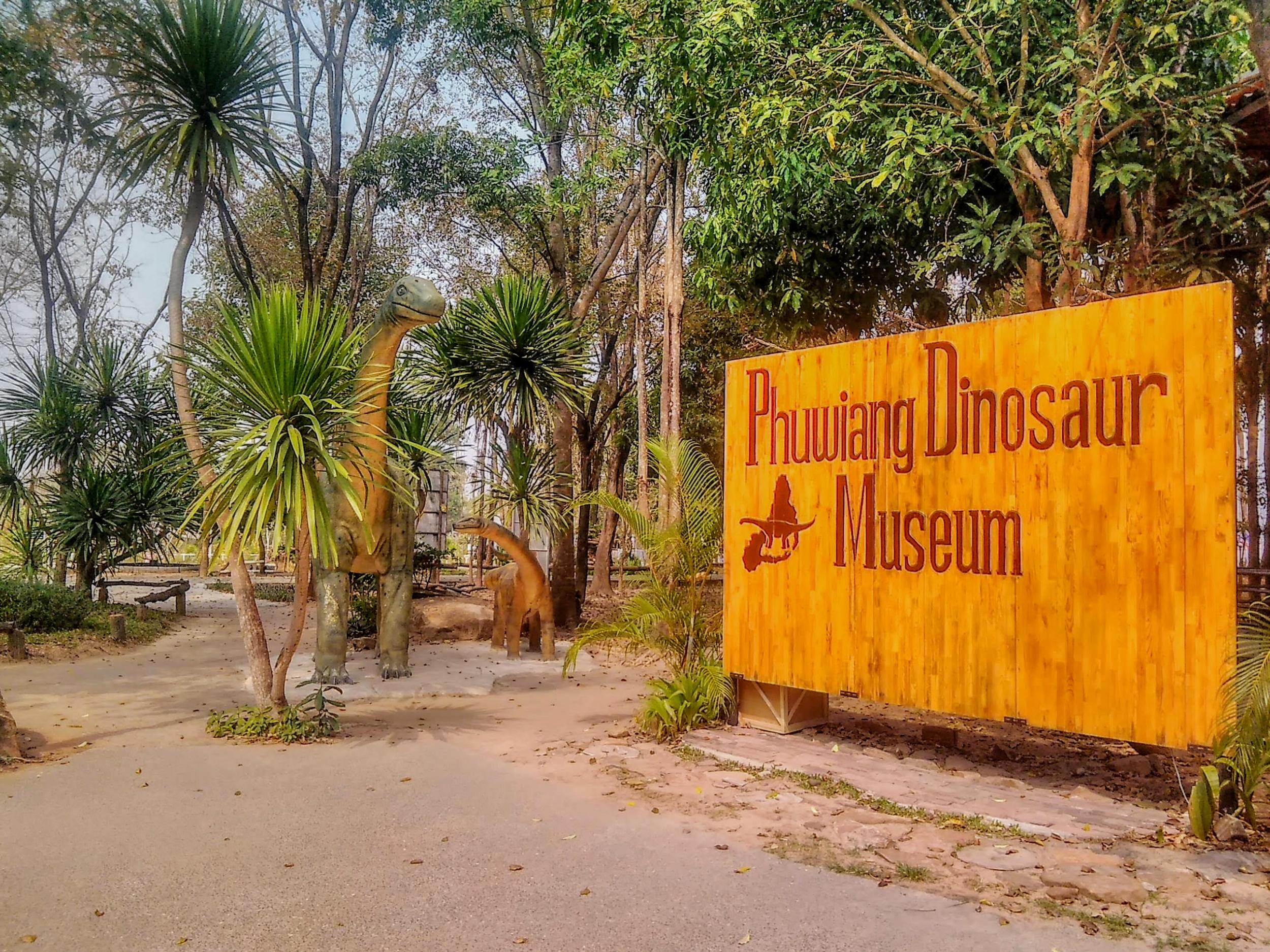 I’d hoped to hike to a campsite I’d been told about near the summit when one of the Thailand’s infamous tropical storms rolled in, so instead I opted to stay at Chuanchom Resort, an endearing dinosaur-themed motel a few kilometres from the national park entrance. Opposite the entrance to the Phu Wiang Dinosaur Museum, the growls and roars of robot dinosaurs woke me the next morning, and after a breakfast of Som Tam Thai (a papaya salad that’s a regional speciality), I set off into the park.

Thailand’s first dinosaur was discovered at Phu Wiang in 1976, when a geologist searching for uranium uncovered a sauropod – the long-necked family of dinosaurs to which the brontosaurus belongs – in the scorched forest of the Phu Wiang mountains. Excavations revealed the vast extent of dinosaur fossils in the park, including four previously undiscovered species, one an ancestor of the Tyrannosaurus rex. Nine fossils were preserved beneath glass in situ for enterprising hikers to stumble upon. I biked to the first site, tucked beneath undergrowth on the rocky lower slopes, then bumped along a dirt track to the base of a trail leading to the second. 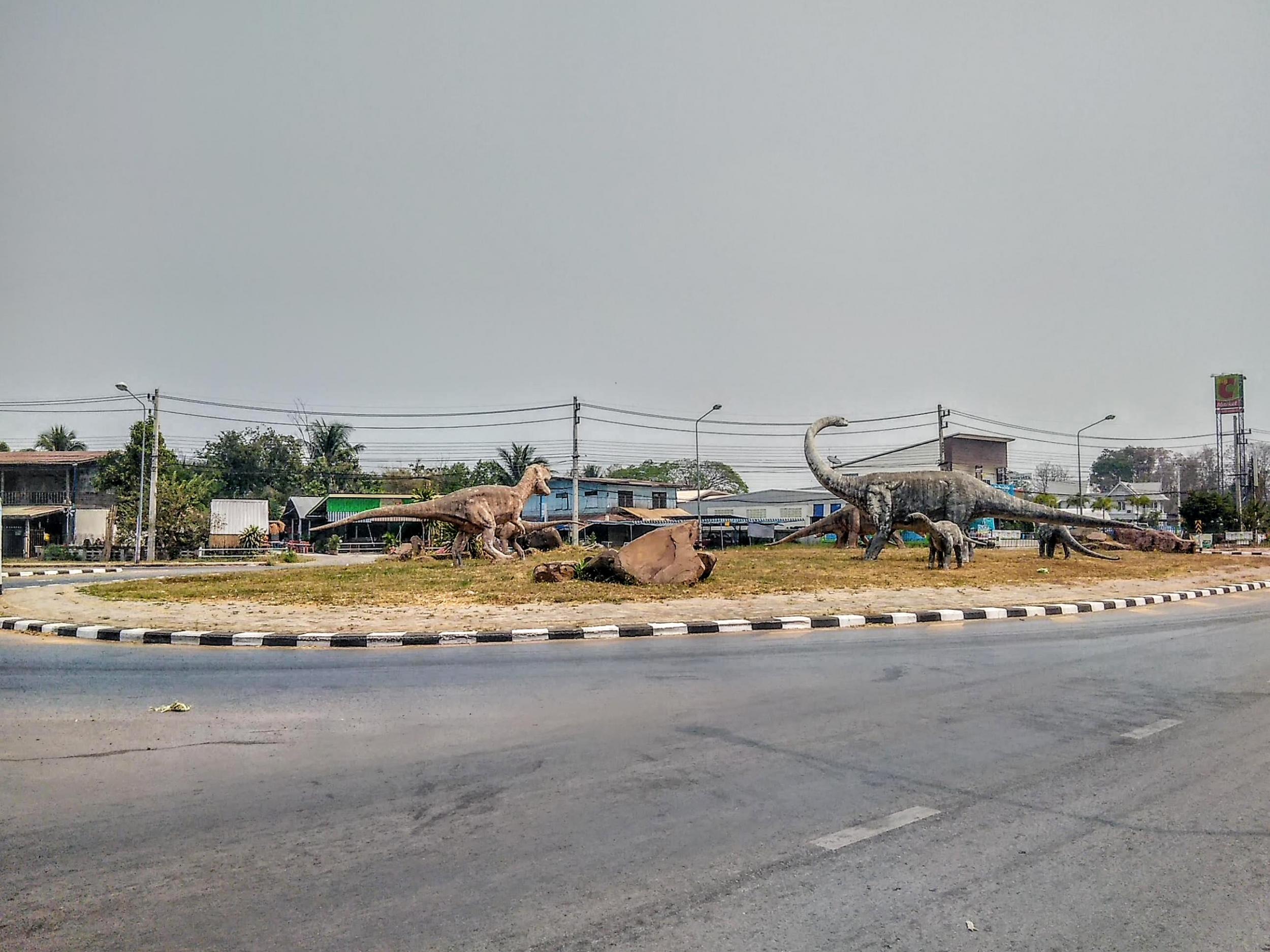 That the trail wasn’t well maintained made the hike even more evocative. At Site 9 – the covered bones of T rex’s ancestor – I turned and realised I was almost at the treeline. A rock pavement took me higher, and I scrambled over rocks to the summit, past a cave containing the bones of the brontosaurus-like sauropod, to Site 1. Looking back down the trail from the park’s most impressive excavation, a Phuwiangosaurus, it wasn’t hard to imagine the excitement of the paleontologists as they uncovered this, the first dinosaur discovered in the park.

Across the valley the forest climbed the other side of the horseshoe mountain, and unfamiliar birds cried around me in sun-baked trees. Back at the base, in Phu Wiang Dinosaur Museum, I trailed groups of Thai schoolchildren around skeletons to reach the lovingly rendered “dinosaur park”. A greenhouse full of animatronic dinosaurs, it felt a world away from the lonely dig at the top of the nearby mountain. 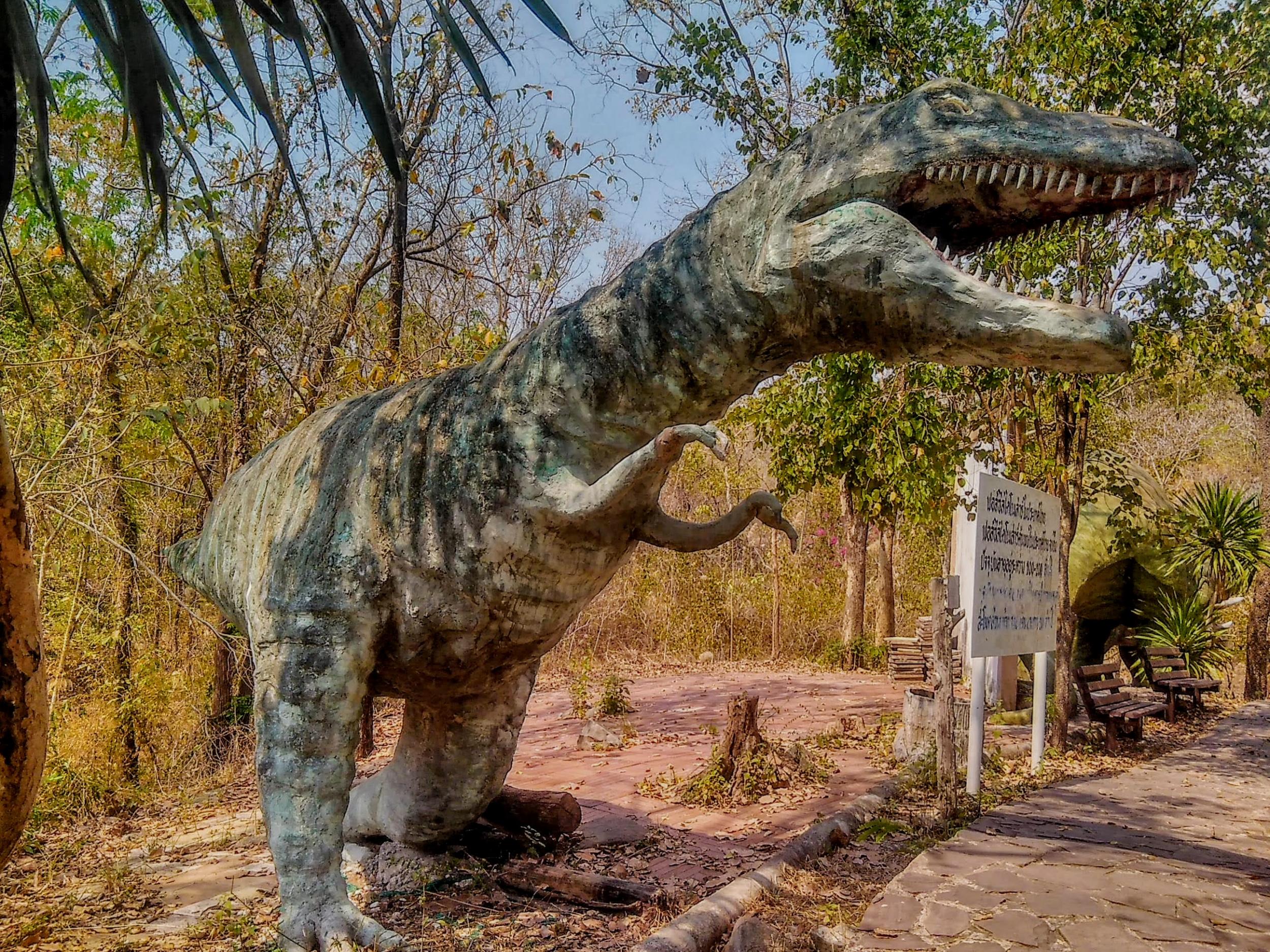 The next day I rode back into the real world. Or so I thought: I headed towards the town of Phu Wiang itself, where the road signs were framed by ornately carved dinosaurs, a petrol station entrance was guarded by a diplodocus, and a brontosaurus waited outside the district hospital.

Unable to resist the charms of Thailand’s tacky dino souvenirs, I’d attached a purple crocheted dinosaur to the back of my bicycle. Phuwiangosaurus may have lived and died in northeastern Thailand, but a memory of it would swing and sway its way to Bangkok with me.

Thai Airways flies from London Heathrow to Udon Thani via Bangkok from £615 return. Phu Wiang park is just over two hours’ drive from there.