I’m lying face down on the floor of a Thai boxing ring in Bangkok when I’m reminded of “Rembrandt”. That was the nickname of a tough old boy in a boxing gym back in London. I’d always thought he was called that out of respect, because he was an Old Master, or maybe because he was considered an artist in the ring. “Nah,” my coach told me. “It’s because he spends so much time on the canvas.”

I could write an entire travel guide to the various canvases of Thailand: at the MuayThai Institute it’s springy but smelly; at Fightlab it’s soft but non-absorbent; in Koh Samui it has the best views down to the ocean; and at The Siam, it feels like velvet.

Twenty years ago – the last time I was in Thailand – most of my fellow UK travellers were rich kids gazing at the cashmere lint in their navels, squaddies on benders and creepy radio DJ types. Back then you avoided the few oddballs who came to learn muay thai: weedy kids who’d watched too many Jean-Claude Van Damme films and thought rat-infested accommodation and one-handed press-ups were character building. 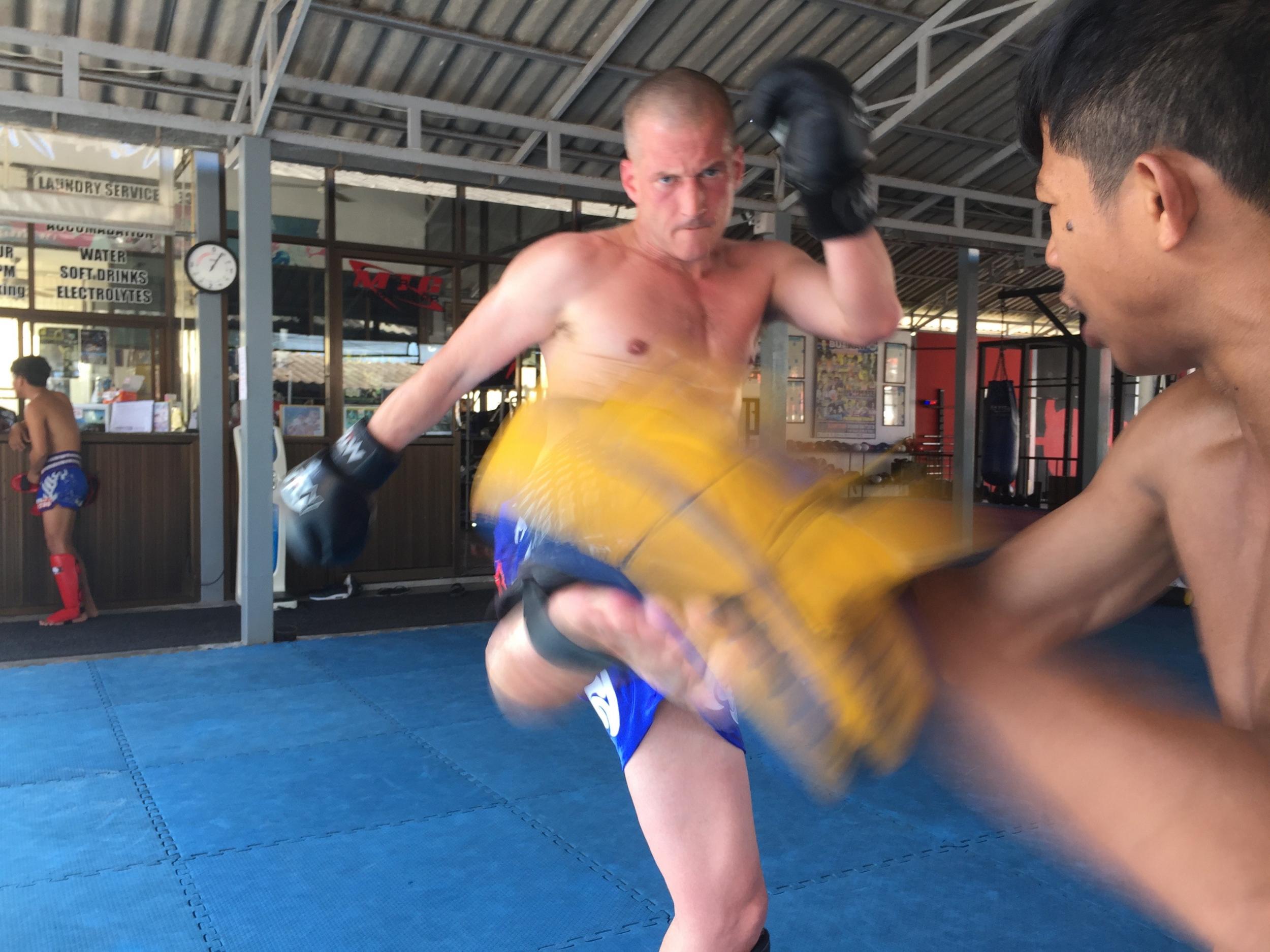 All that has changed. The country has gone from seedy to upscale; from party animals at full moon raves to downward dog at sunrise. Thailand is now a top destination for fitness holidays, yoga retreats and spa breaks.

The fight scene has changed radically too. I’m in Thailand on a week long tour of all the top muay thai schools, looking for somewhere to spend a few months training next year. I’m amazed by the evolution. Vast, air-conditioned martial arts palaces with state-of-the-art gyms, nutritionists and paleo cafes are par for the course since the explosion of MMA (mixed martial arts) took fighting mainstream. It’s the go-to sport for the beautiful people. On my travels I spot a football star in one camp and have a Victoria’s Secret model as a neighbour in another. In 2016, Idris Elba spent months in Thailand training for his first professional kickboxing fight. He won.

Nowhere defines this better than The Siam in Bangkok. It’s a hotel that’s famous for its beautiful design, priceless collection of antiquities and – somewhat incongruously – muay thai. The star of the show is Yin. He’s an Olympic coach and counts the Thai princesses as clients.

Like a lot of legends he’s smaller than you expect, but still a towering presence when viewed from the canvas. There’s an inverse rule-of-thumb in martial arts: the more lethal the fighter, the more friendly they tend to be. Yin is very friendly indeed. Even his broken English makes his deadly art sound delightful. “I hit and make you very sleepy,” refers to a knock-out punch. “You go to bed with wheels!” He means a hospital trolley.

What I enjoy most is learning about the wai khru. It’s a short Thai ritual set to music that every fighter performs before a bout. I’ll admit, I wasn’t massively interested at first – I wanted to fight, not morris dance – but Yin explains it’s about giving thanks and showing respect to your country, the land, your parents and teachers. It’s good for stretching too. There’s also a bit where you mimic shooting an arrow three times at your enemy. You pretend to miss twice but you persevere and eventually hit your target. Sure, it’s a bit “if at first you don’t succeed, try, try again” translated into dance, but one of the joys of travel is hearing home truths in foreign tongues and seeing them afresh. And if mantras and words to live by are your thing, The Siam has its own tattooist who does magical religious sak yant designs (think of the mystical diagrams gracing the shoulders of Angelina Jolie and Cara Delevingne).

If you want MMA then head for Bangkok Fight Lab. It’s run by Morgan Perkins, a softly spoken Brazilian jujutsu black belt from Utah who has lived in Bangkok for more than a decade. The place is like an aircraft hanger – it has a muay thai ring, a caged octagon, lots of mats to roll on and endless punchbags. At one end, scores of men and women climb up and down very long, heavy ropes beneath a ceiling fan the size of a helicopter rotor. It’s like a scene from James Bond or Austin Powers, with ninjas training inside the baddy’s secret base. 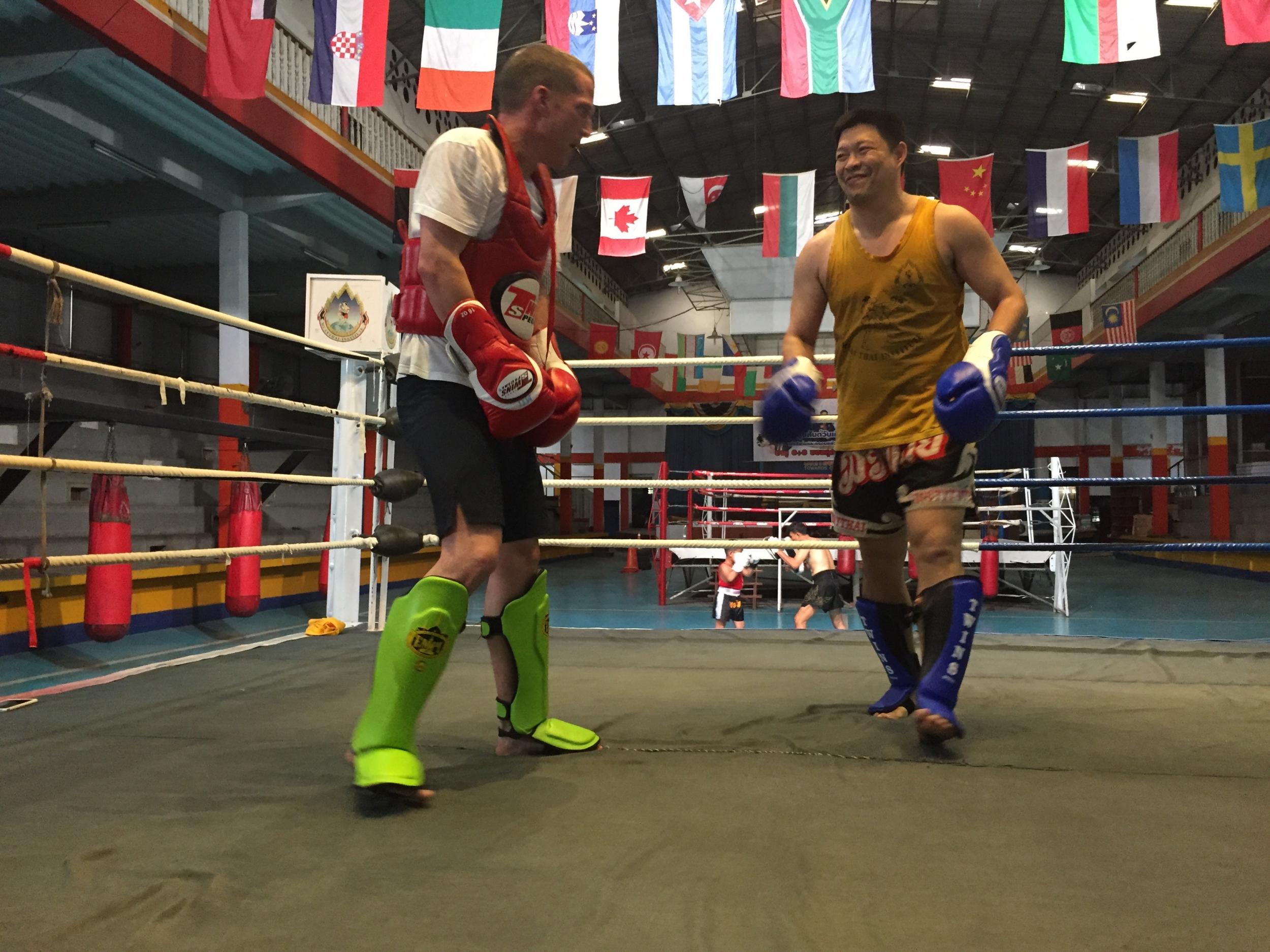 I decide to take a brief break from getting my arse kicked and check out the pros at Lumpinee Stadium. It turns out to be exceptionally cheap to get front row seats to some amazing fights. I take time to watch the crowd too, observe the trainers and their fighters, and breathe in the Tiger Balm-laced air – this is muay thai.

Next I’m off to Koh Samui, where I go to train with Ralph Beale at Lamai Muay Thai Camp. “Half Thai, half Cockney,” Ralph is a humble man with an incredible passion for muay thai. People travel from all over the world to train with him, around half of them women. Kelly Hayes, a British fighter, is there at the same time as me, training for one of her big bouts while her boyfriend goes sightseeing.

Although I’m training at an intense camp, I opt for a little more luxury with my hotel choice and stay at the Four Seasons, which has villas scattered across a lush green hill that slopes steeply down to the beach. Impeccable staff scoot around in golf buggies ferrying guests between massages, scrubs, facials on the beach and yoga in the treetops; there’s even a muay thai boxing ring perched on top of the hill. 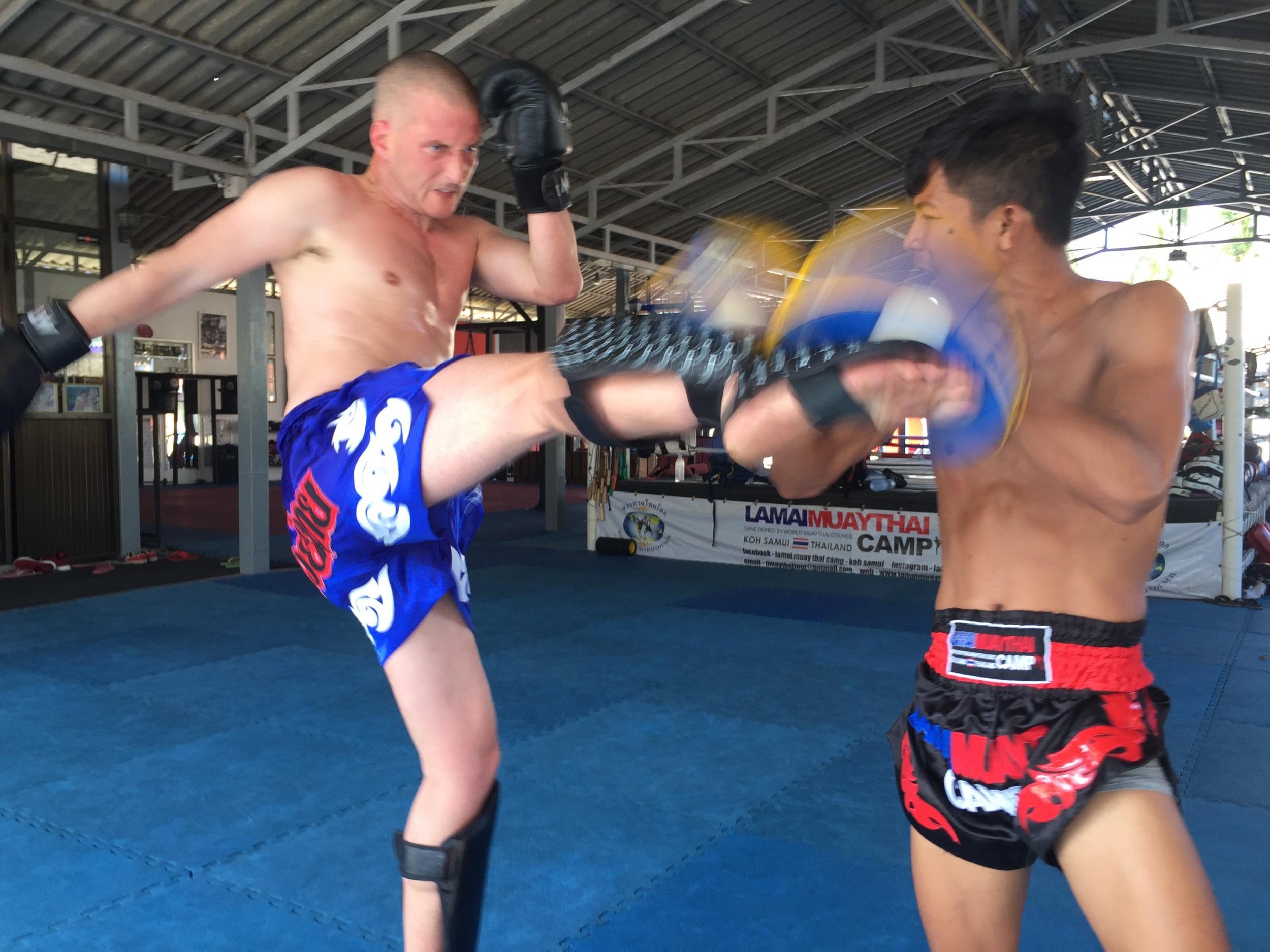 Beach holidays, infinity pools and feelgood therapies usually bore me senseless; this time, I love it. Having released my Tyler Durden, I’m more than happy to embrace my inner snowflake. Yoga? It’s great for those high kicks. Spas? Pop another cucumber on my swollen eye, please. They even offer a muay thai recovery massage with herbal steam.

Later – kale, spirulina and lemongrass smoothie in hand – I get all reflective in my private infinity pool and realise just how insufferable I’ve become. But I don’t beat myself up too much. It’s much more fun to hire someone to do it for you.

An eight night trip to Thailand with Abercrombie & Kent costs from £3,450 per person, B&B. This includes three nights at The Siam Bangkok and five nights at The Four Seasons Resort Koh Samui in a one bedroom villa, plus a five day muay thai tour, international and internal flights and private transfers.

Missing the beach? This rum cocktail will transport you straight to sunshine