I’ve never had much love for Bangkok. Not for lack of trying: I’ve visited a few times over the years and have always come away with the sense that I can’t get a handle on the place.

A city of 12 million inhabitants, it would be easy to describe Bangkok as chaotic. Entire tomes have been dedicated to the city’s feverish nightlife. Yet for all of its foibles and contradictions, Bangkok has been attracting more and more travelers over the years, which is why on a recent visit to the Waldorf Astoria Bangkok, I was determined to see if my feelings toward the Thai capital could be swayed.

Standing 60 stories high, the Waldorf officially opened Aug. 31 and is a beautiful mixed-use space of residences and 171 guestrooms. Arriving late at night, I had no trouble settling into my King Deluxe room on the 14th floor, taking full advantage of the rainfall shower in my marble-clad bathroom before hitting the shutters and night setting icon on my in-room touchscreen tablet. The room, much like the property itself, has a subtle sort of beauty to it, or what architect Andre Fu described to me as “relaxed luxury.” 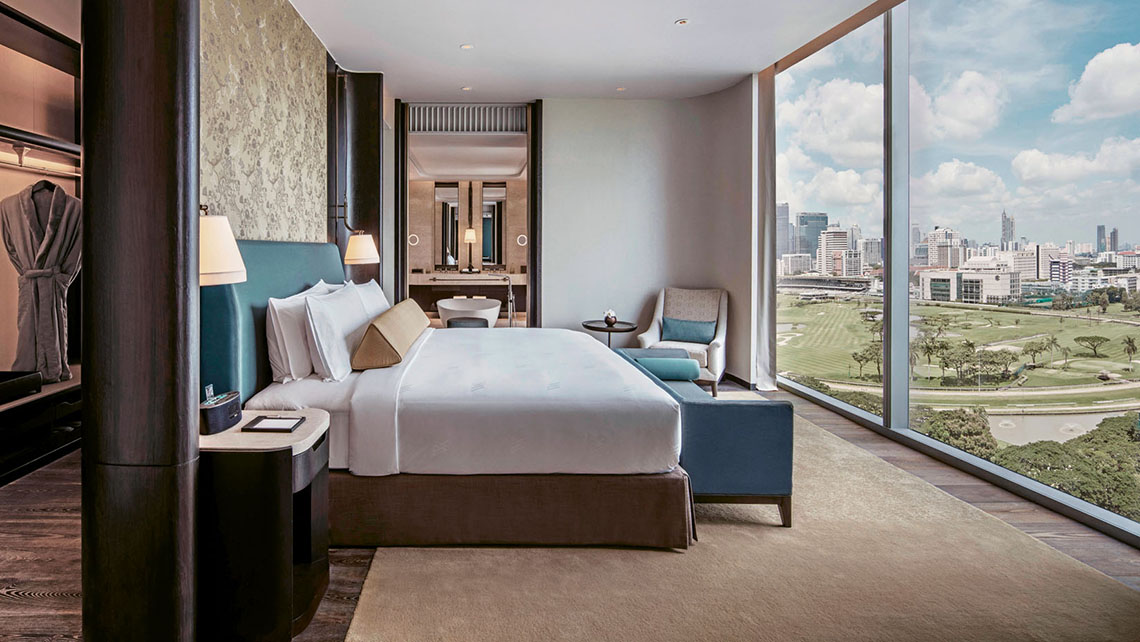 The next morning, I got an early start with laps in the 16th-floor infinity pool to ward off residual jet lag, followed by freshly baked croissants and a truffle eggs Benedict with a side of congee in the beautifully adorned breakfast restaurant the Brasserie. The day’s afternoon agenda included a mix of R&R, including afternoon tea in the hotel’s signature Peacock Alley and a Royal Thai Massage treatment at the spa. Relaxed luxury, check.

The better part of my time in Bangkok, organized by luxury tour operator Abercrombie & Kent, was led by an incredibly endearing guide named Sarah (her American-Thai name) and started the following morning with a monk blessing at a local wat followed by a tour of the Grand Palace and a cooking class at Eathai — basically the Thai equivalent of Eataly, but cooler.

Over the next two days, Sarah introduced us to a mix of markets and museums, including American silk trader and antiquarian Jim Thompson’s House and an incredible tour of Bangkok’s designated creative district. That area, site of the Jam Factory (architect Duangrit Bunnag’s warehouse turned restaurant, boutique and workspace concept) and the Thailand Creative & Design Center (a multilevel library, cafe and artist incubator), is one area of Bangkok I not only never knew existed but completely fell in love with.

At night, after dinner at some of the city’s most lauded restaurants, including the Waldorf’s Nordic-Thai concept Front Room and the Michelin-rated Paste Bangkok, I would steal away into the maze of side streets in Chinatown to check out some of the city’s hipster gin bars and low-key speakeasies. While I may never be able to harness Bangkok’s boundless energy, it’s the subtle beauty that abounds throughout the city and in hotels like the Waldorf that will definitely have me coming back for more.

Starting rate for a King Deluxe room with taxes included is $465. For more information, see https://waldorfastoria3.hilton.com.

Air miles hack: How to buy flights worth thousands – for hundreds