​In a stadium smelling of peppermint liniment, along the main drag in Patong, two young women wearing boxing gloves, ornate headdresses and eye-catching vests and shorts climb under the ropes and circle the ring, pausing to bow at each corner. A quartet on oboe, drums and cymbals strikes up a keening rhythm from the stands as one of the pair, a diminutive Thai, performs an elaborate war dance; the other fighter, pale-skinned, red-haired, stares into the middle distance, waiting for the bell to ping.

When it does, all bets – and the headdresses – are off. “Go Rhona!” we bellow as the Scot we’re here to support powers in with a barrage of kicks and punches, some of which land on her opponent, who fires back with a knee strike and a double elbow chop that leaves the farang (foreigner) a little shaky on her feet. After five rounds, with the music screeching at fever pitch, the Thai is declared the winner, and the next fight, between a pair of tattooed dudes in high-cut boxers, gets underway.

Most tourists come to Thailand for sun and sightseeing. Not me. Like Rhona (24, from Glasgow), I have come to practise the ancient combat sport of Muay Thai, or Thai boxing. Involving clinches as well as stand-up strikes, it’s an art that was once fought by a military armed with rope-wrapped fists and a philosophy that “eight limbs” (delivered via punches, kicks, elbows and knee strikes) were infinitely better than a measly pair of hands. Unlike Rhona, I’ve no plans to fight competitively, which is just as well; sitting in the raucous Galaxy stadium, can of rum and coke in hand, I’m hit by the profound realisation that if I ever got in a ring I’d be toast. 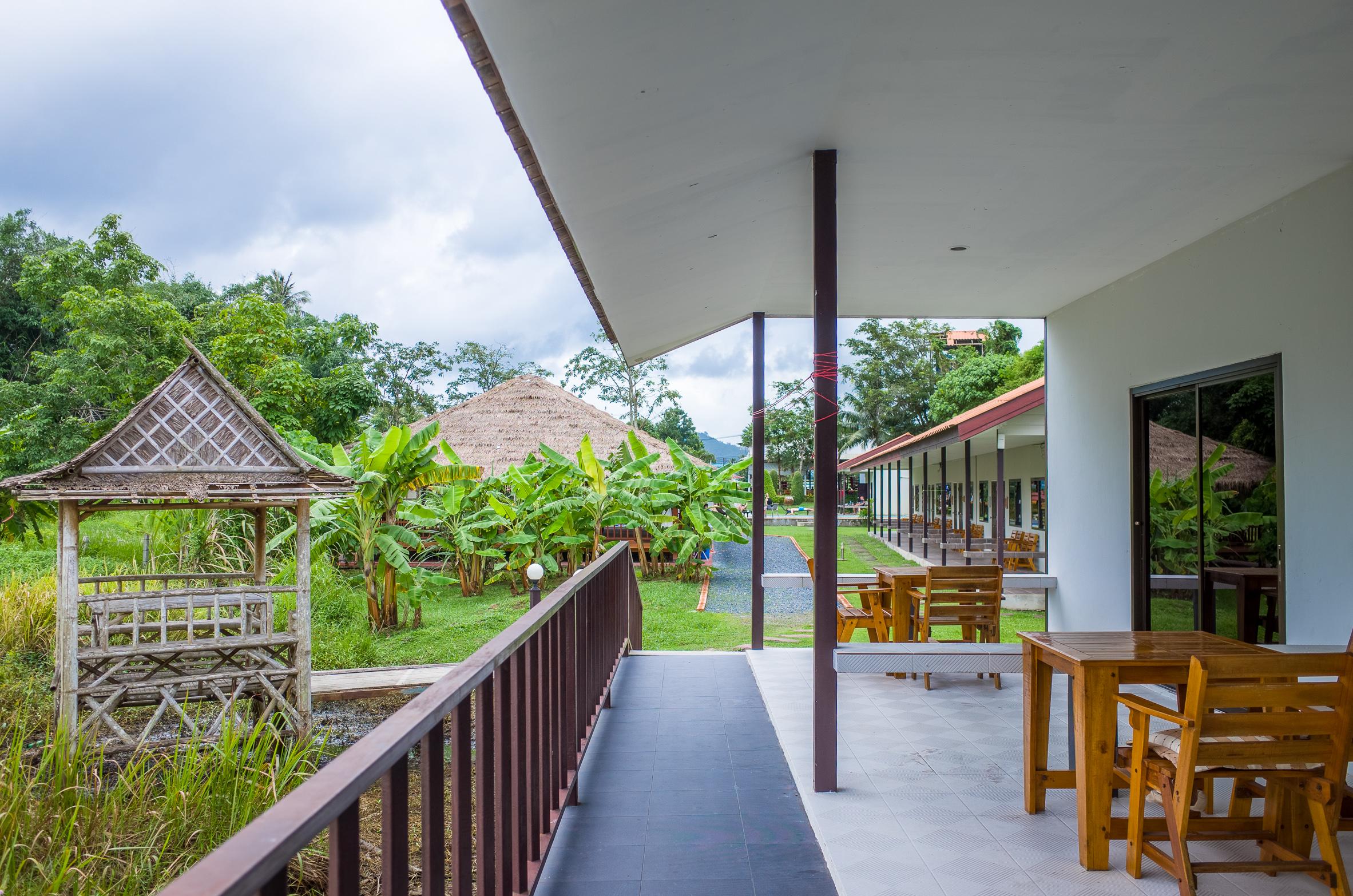 My two-week stint at Sumalee – a British-owned gym located half an hour’s drive from Patong in the island’s untouristy middle, where people like Rhona go to learn how to compete seriously – has been exhilarating, nonetheless. Here, on an old banana plantation with a swimming pool, health food restaurant and view of a temple, I’ve been getting up earlier than I ever do at home, and making my bleary way to an open-sided training area with twin boxing rings and a mirrored, mat-covered space where wannabe warriors from countries including the UK, Ireland and Australia are bouncing on horizontal tractor tyres, warming up. Most have signed up partly for the exercise – squats, sprints, sit-ups – and partly to improve their skills. There’s also a big buzz to be had from wrapping knuckles, donning gloves and beating the crap out of a heavy bag.

The Thai trainers at Sumalee are all former champs. “Left hook! Right roundhouse!” cries Sunn, offering his pad to be walloped. “Block!” yells Gunn, throwing a kick in slow motion, which I try to deflect by leaning sideways, my elbow touching my raised knee, but can’t quite seem to coordinate. “Foot thrust!” commands Bang, and this tactic I think I’m okay at; I land a hard blow square in his abs that sends him back at least one step, maybe two. “Wowee,” he puffs, mock breathless. 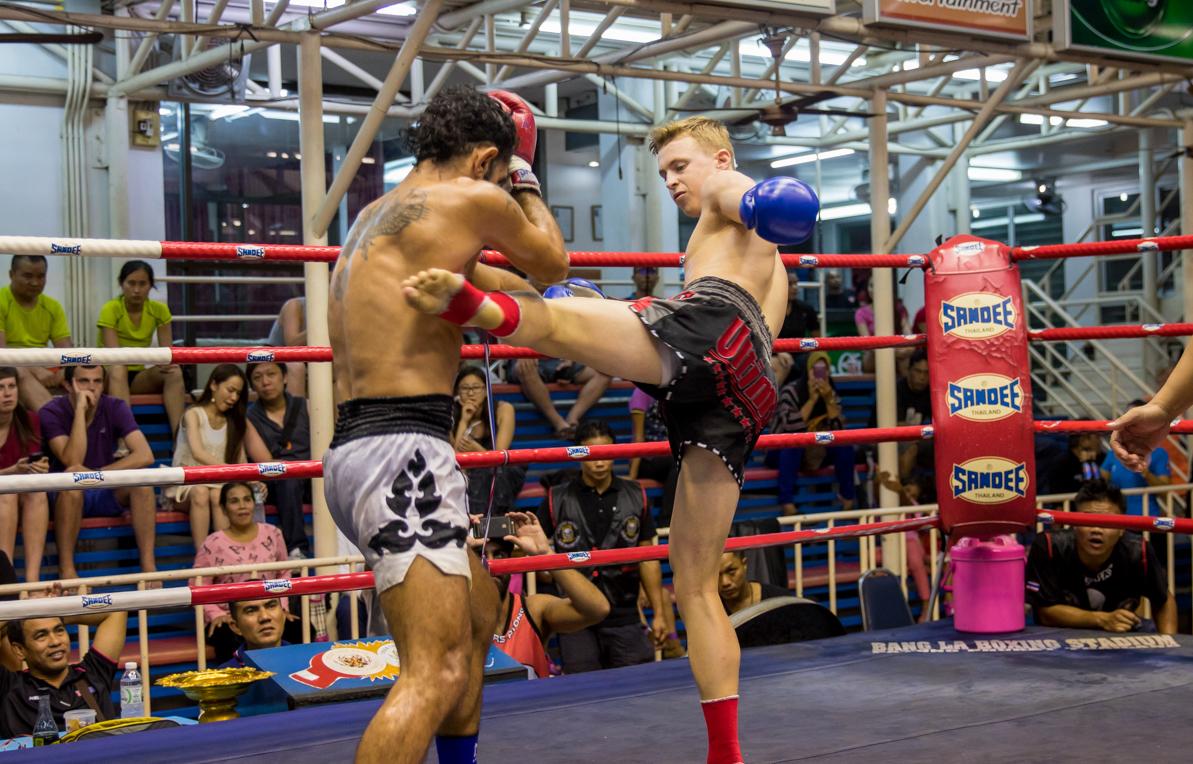 When not skipping rope, sprinting through jungle or kicking banana trees to strengthen their shins, Sumalee’s sponsored fighters train separately, awesomely, sparring in the rings with the trainers and each other, their sweat spraying the canvas as they attack, block, clinch and duck. A bearded dude from Malta is sporting a shiny black eye; Damon, an Australian with a Mohawk and tiger-claw prints inked down his back, pauses to bend his busted nose into place. Rhona is there, too, feeling robbed of her last win but visualising herself triumphant in her next. Having sported the Sumalee logo at stadiums on Phuket and in Bangkok she’ll soon be returning to her Muay Thai club in Scotland with a fearsome reputation forged at the source, and a fistful of baht in her pocket.

Muay Thai has gained tremendous worldwide popularity over the last decade or so, with designated clubs springing up everywhere from Manchester to Melbourne, and Muay Thai manoeuvres adding badass intensity to, variously, the MMA (Mixed Martial Arts) arsenal, gym timetables and self defence classes.

In Thailand it’s the national sport, screened on TV and followed with quasi-religious fervour (indeed, the rituals that accompany professional fights have a spiritual basis, and are intended to foster respect). Betting on matches – which are fought between men, women and youths as young as 15 – is normal. There are Muay Thai gyms all over the country, most little more than corrugated sheds in car parks or improvised rings in cramped backyards. With its neat row of cabanas and ringside menu offering nutritionally considerate meals, Sumalee – basic, reliable, with scores of returnees – is a veritable Ritz among Muay Thai gyms. A wooden pagoda strewn with colourful beanbags and observed by a large statue of the Buddha hosts daily morning yoga sessions intended to increase a warrior’s flexibility and focus; at least twice a day there is almighty splashing in the pool after group training ends with palm-pressed bows and much uttering of “khob khun ka” (“thank you”). 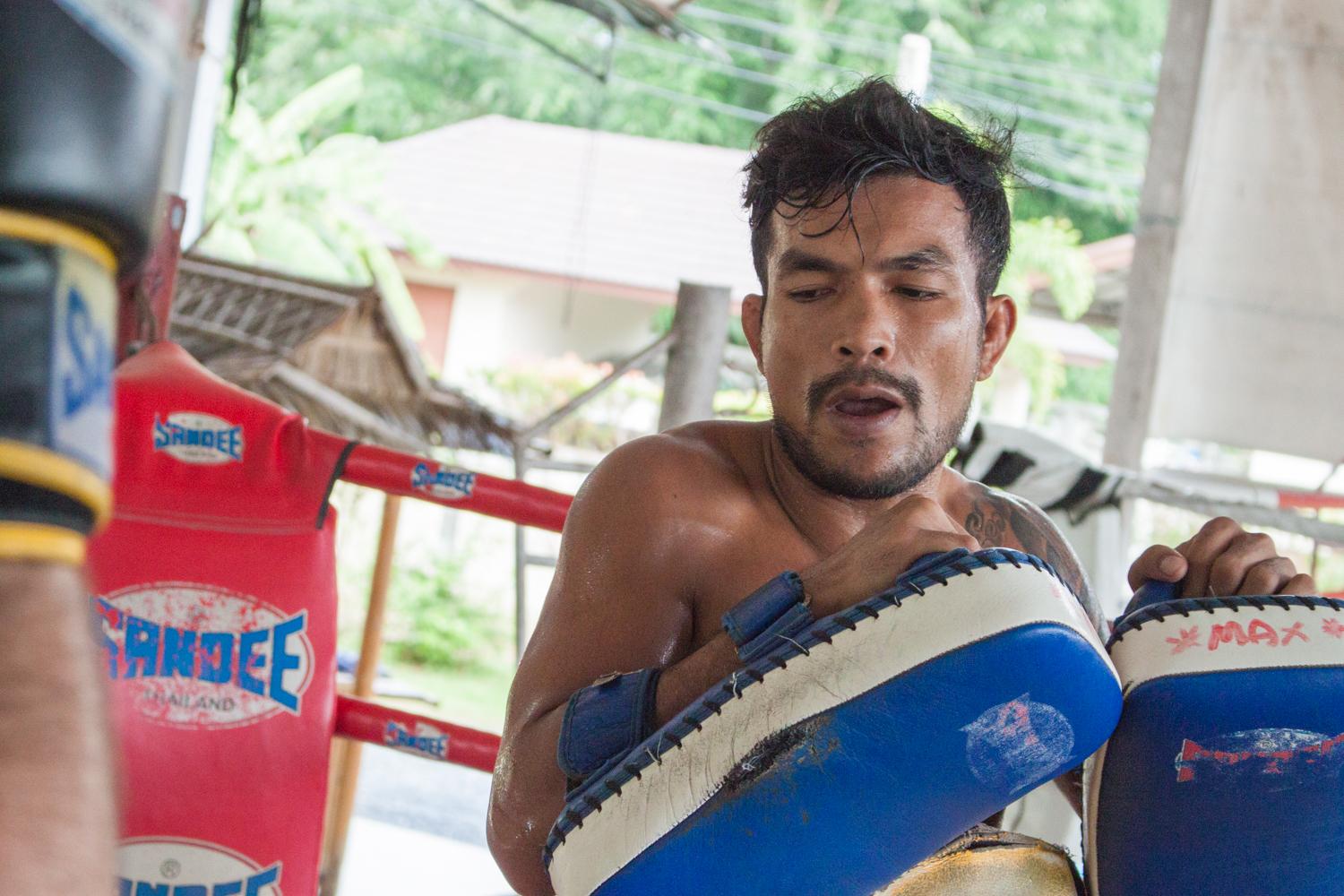 Onsite motorbikes allow you to zoom off to nearby attractions, like Bang Pae waterfall and its nearby gibbon sanctuary. You’re also within easy reach of beaches like surf-tastic Surin, with its upscale bars and restaurants, or Nai Yang, which is good for for kite surfing – that is, if two hardcore Muay Thai sessions and a 10k run per day isn’t calorie-consuming enough. On a more relaxing note, I find a sensational Thai massage centre not too far away and visit every couple of days, walking there and floating back.

But it’s the fight nights, to which we travel as a group, that leave the greatest Impression – if just to show what we could achieve if we trained harder and longer. When Rhona Walker wins her next match at Galaxy Stadium, as do two other Sumalee fighters, we jump up and down, punching the air. Sometimes it isn’t just the taking part that counts. It’s the vicarious winning.

Thai Airways flies from Heathrow to Phuket via Bangkok from £604.

Courses at Sumalee start from £23 per day in a shared room or £34 per day in a private room, including two daily sessions of Muay Thai.

The writer stayed as a guest of Sumalee

Nakheel begins work on infinity pool at The Palm Tower

Travellers can find tools to weigh safety of foreign airlines