As we marched single file through the jungle, I couldn’t help but feel a sense of urgency, silently wishing the person ahead of me would stay as close to the guides as possible.

I was on my way to observe Uganda’s mountain gorillas, and I didn’t want to miss a second of the hour that each group is allotted to observe them. And then, there they were: A silverback sat in the middle of a clearing munching on leaves. A couple of minutes later, a young gorilla, roughly 2 years old, came barreling down a tree and rolled in the brush just a few feet away. After lying in the grass for a bit, he quickly scooted toward us, hugged one of my companion’s legs, then came over to me and briefly grabbed my pant leg before moving on.

I traveled to East Africa as a guest of Volcanoes Safaris, which operates four luxury lodges in the area: one in Rwanda and three in Uganda. During my weeklong stay, I was able to visit three of those lodges, experience some of the other activities they offer and, of course, see the gorillas. 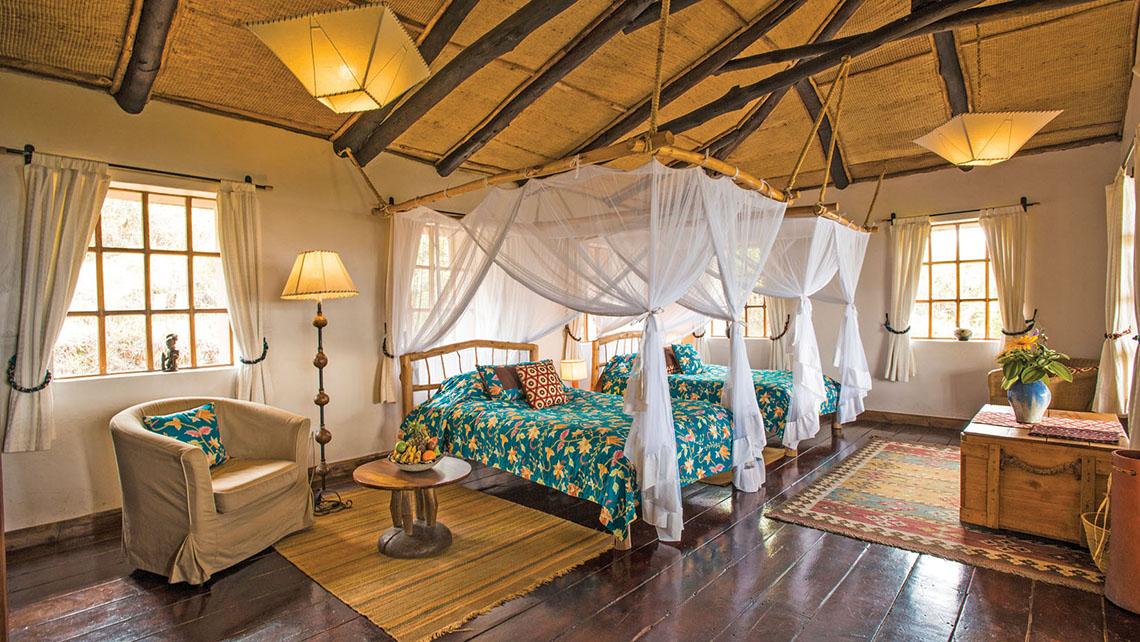 My first stop was the Virunga Lodge in Rwanda, which sits on a ridge high up in the hills with spectacular views of the surrounding countryside and several island-dotted lakes. The lodge has 10 chalets, or bandas, half of which have great sunset views (the other half get the sunrise). The cozy main lodge has a circular, open fireplace as a central piece and features extensive verandas, perfect for a sundowner cocktail after a day of trekking.

Next, I stayed two nights at Bwindi Lodge in Uganda, located on the edge of the aptly named Bwindi Impenetrable National Park. While just a few minutes’ walk from the small town of Bwindi, the lodge feels like it’s in the middle of the jungle, and gorillas have been known to wander onto the premises. Each banda is surrounded by lush vegetation, providing guests with both a sense of privacy and of remoteness.

Visitors can take an easy stroll around the premises, down to a small stream or nearby tea plantation, or wander into town to visit the Bwindi Cafe, a small restaurant owned by Volcanoes Safaris that trains locals to work in the service industry. On my visit, we took a guided walk through the jungle to visit three waterfalls and were able to observe red-tailed and L’Hoest’s monkeys.

I spent the last two nights of my trip at the Mount Gahinga Lodge on the border of Uganda’s Volcanoes National Park. In contrast to Bwindi, Gahinga’s bandas are not closed in by vegetation but rather set out in the open, affording guests great views of the surrounding countryside. My cottage featured a spacious bathroom that was almost as large as the bedroom, and many of the interior walls were made of exposed volcanic rock, a fitting material given the lodge’s setting. From the patio of the main lodge (another great sundowner spot), visitors can watch clouds wrapping around and sliding off the Virunga volcanoes.

The three lodges that I visited each had a distinct feel. 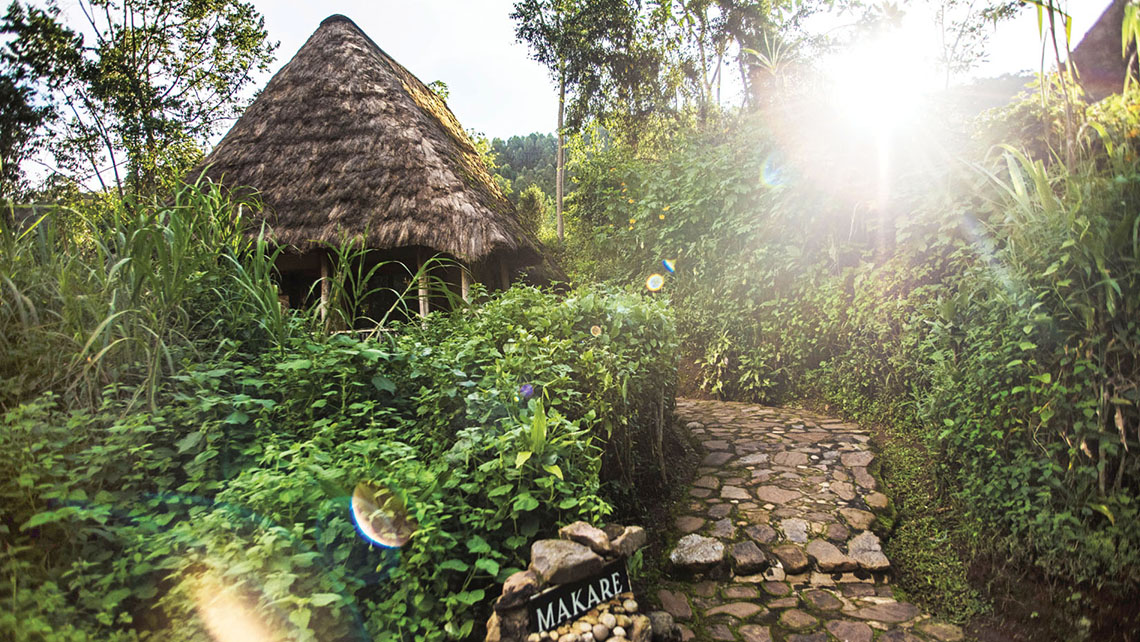 “That’s something that’s been very important to me, that you build in the context of where you are, so every lodge has to be different,” said Volcanoes Safaris founder Praveen Moman.

And while each lodge is unique, they all offer top-notch service and some great perks. Upon check-in, guests are assigned a personal butler, who will bring them their morning coffee, make sure their shoes are cleaned after a muddy trek or get a fire going in the fireplace on chilly nights. Guests also get a 30-minute massage. In addition, each banda comes with a bowl of fresh fruit and a bottle of red wine.

The lodges all share something else in common: Each offers the opportunity to visit a nearby community project, either one sponsored by the Volcanoes Safaris Partnership Trust (VSPT) or another nonprofit organization. From the Virunga Lodge, we made the short walk down to a bustling local community center and library, of which VSPT was one of the sponsors. From the Bwindi Lodge, we visited an organization that works to protect the gorilla population by educating locals about diseases that can spread from humans to gorillas as well as to reduce human-gorilla conflict by training volunteers to peacefully expel gorillas from farmers’ crops.

The final project I visited impressed me the most: the recently opened Batwa village, a short walk from the Mount Gahinga Lodge. The indigenous Batwa people were forcibly removed from their forest home in 1991, when the national parks were created to protect the gorillas. Accustomed to living in the jungle, the transition to modern life has not gone smoothly for the Batwa, so Moman and VSPT purchased land and worked with the Batwa to construct a village consisting of 18 huts and a spacious central meeting house. 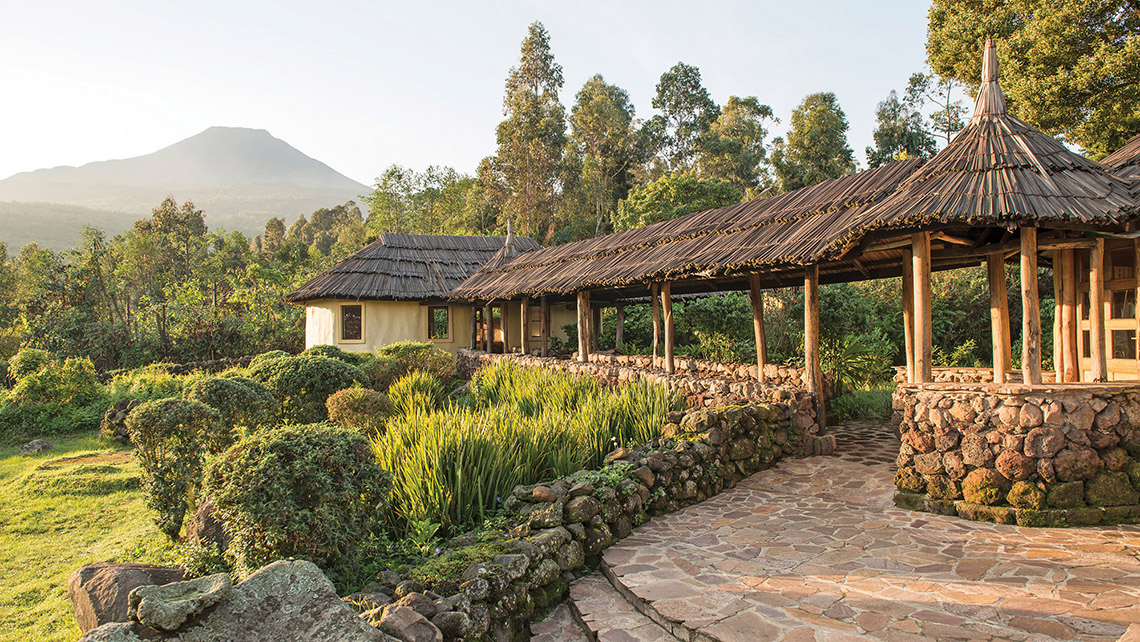 Guests at the Gahinga Lodge can take a short tour with some Batwa representatives who demonstrate the techniques they used to survive in the jungle, including bow hunting and starting fires by hand.

While the community projects were interesting and inspiring, obviously the main attraction to the Volcanoes lodges is the gorilla trekking. From two of the three lodges where I stayed (Bwindi and Mount Gahinga), it’s walking distance to the park entrance to start a trek (depending on where the gorillas are within the parks), and from the Virunga Lodge it’s about a half-hour’s drive to park headquarters.

As with any wildlife-spotting adventure, you never know quite what the gorilla-trekking experience will be like. On the positive side, it’s basically a guarantee that you will see gorillas. But there are lots of unknowns. You might only have to walk for 20 minutes or so, as was my experience, or you might end up walking for hours. You could spend most of your time on well-trodden trails on a sunny day, or you might be bushwhacking up and over steep hills and through dense jungle in the pouring rain. Regardless of your experience, one thing is certain: The hour you get to spend watching a family of mountain gorillas in their natural habitat will go by much too quickly.

Rates at Volcanoes lodges vary by lodge and season but start at $2,350 for a four-day safari. For more information visit www.volcanoessafaris.com.

Who needs a crew when you have family ·

These Photos of U.S. National Parks Will Leave You Longing For a Weekend Away