It’s hard to describe the involuntary sound that escaped my mouth as I plummeted roughly 260 feet toward the stadium field below me — something between a grunt and a yelp. Either way, it was one of sheer terror.

This was my experience on the world’s tallest swing, the Big Rush, at Moses Mabhida Stadium in Durban, South Africa. I had climbed the 362 steps up the arch that spans the stadium, then lowered myself down a small ladder to a platform, where I was harnessed into the swing. Then I stepped off into the void for a petrifying free-fall of about four seconds before swinging out in a graceful arc over the field.

I had come to Durban as a guest of South African Tourism to attend the three-day Indaba 2018 travel conference, the largest such event on the continent, with nearly 1,100 exhibiting companies. The conference featured speed-marketing events, where local tourism representatives were given five minutes to describe their destination to groups of buyers, as well as panels on a wide range of tourism topics.

Bangu Masisi, president of South African Tourism’s North America division, said the country had received in excess of 350,000 arrivals from the U.S. and Canada last year but noted that they had barely scratched the surface of that market.

“We had to rethink how we are actually going to increase our presence in the two markets,” she said. She said they are specifically hoping to increase visits from black and LGBTQ travelers from North America. She also pointed out that South Africa’s new president, Cyril Ramaphosa, had made it a point of his administration to increase tourism to the country, calling it “low-hanging fruit” for improving the economy and creating jobs.

Prior to the conference, my journey to South Africa started with a two-day stay in Johannesburg, where we explored some of the up-and-coming neighborhoods that have emerged in the city in recent years. One spot of note is the Maboneng District, which features hip restaurants and cafes and some truly spectacular street art. Past Experiences tours provide guided walks of the neighborhood and other spots in the city.

Johannesburg is also home to several important sites related to Nelson Mandela. We stopped at the building where Mandela made his name as a lawyer and at Constitution Hill, which is both a former prison where Mandela was an inmate (as was Mahatma Gandhi) and current home to the country’s Constitutional Court, which is the country’s supreme court. This year marks the centenary of Mandela’s birth, and South Africa is hosting a series of events throughout the year to commemorate it, including a concert in Johannesburg in December headlined by Beyonce and Jay-Z. 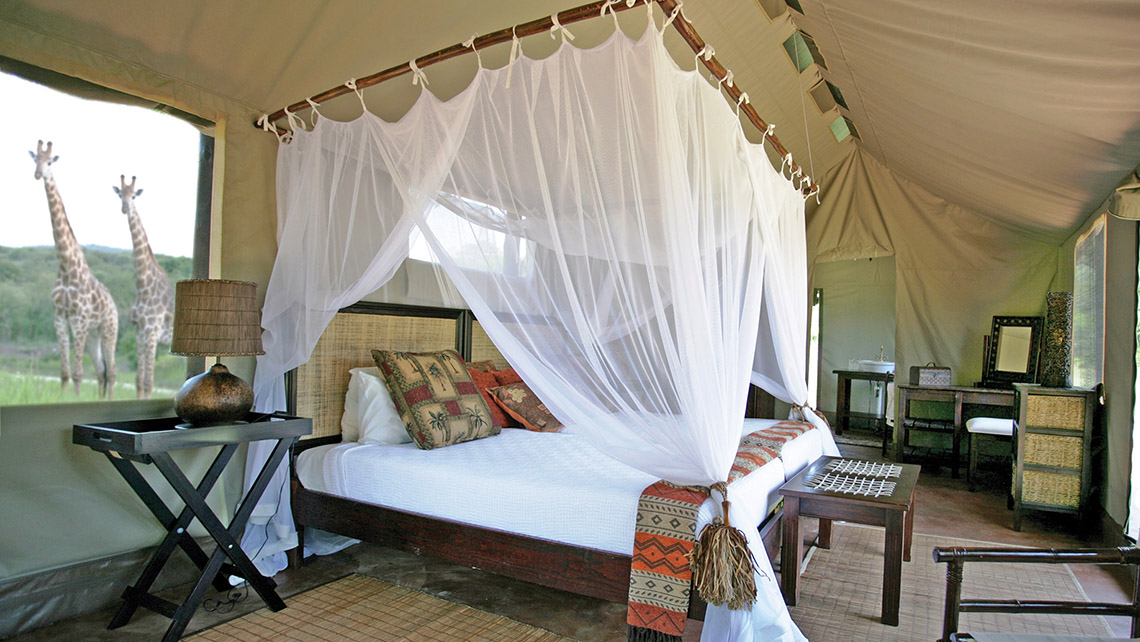 From safari camp to Cape Town

The next stop was Durban, from where we made the easy, two-and-a-half-hour drive to Thula Thula, an 11,000-acre private game reserve and lodge. The founder of Thula Thula, Lawrence Anthony, was known for his ability to rehabilitate rescued elephants as well as his work to save exotic animals from the Baghdad Zoo during the 2003 invasion of Iraq. Anthony died in 2012, but the reserve is still run by his wife, Francoise Malby-Anthony. She related how the reserve started out with just seven elephants but now has a thriving herd as well as hippos, giraffes, zebras, leopards and a pair of orphaned white rhinos.

Thula Thula is home to two separate facilities: the Elephant Safari Lodge with eight thatch-roof chalets and a tented camp with eight luxury tents. My tent featured a double bed, a beautiful claw-foot bathtub in the attached bathroom, an outdoor shower, a writing desk and a deck with valley views — a great spot for a morning coffee. While only a stone’s throw from a neighboring tent, it felt like I was sleeping in the middle of the deep brush, and the grunts and rustling of large animals at night only served to reinforce that feeling.

During my two-day stay, we went on two game drives and were able to see all the animals mentioned above minus the leopards, with some very close encounters with elephants. The knowledgeable guides talked about the time they spent with Anthony as well as the importance of conservation efforts and the constant battle against poachers.

A highlight of my stay at Thula Thula was the food. In addition to running the lodge, Malby-Anthony is a chef and prides herself on the cuisine served. A sample menu for lunch included couscous and smoked salmon salad and a seafood Creole pancake. I was also able to participate in a cooking class supervised by Malby-Anthony, in which my classmates and I helped prepare the evening meal for the other guests (although I suspect some of our less successful attempts were swapped out for better-looking versions). Rates at Thula Thula start at $225 per night, which includes meals and either two game drives or a game drive and bush walk.

The last stop on my trip was a brief stay at the beautiful Cape Grace hotel in Cape Town. Between visits to the top of nearby Table Mountain and strolls along the waterfront, I learned about some of the measures the city has adopted to deal with the recent water crisis, including one hotel installing a desalination plant in its basement. And while Cape Town is an undeniably beautiful city with a spectacular setting, I was glad on this trip to have gotten the chance to experience the less-visited sites of Durban and Johannesburg and, of course, to have survived the Big Rush.

California Fires: What to Know If You're Visiting California This Week