Home » Destinations » A cinema, a pool, a bar: inside the post-apocalyptic underground future

Tucked away among cornfields in the midwestern United States, a military-grade chainlink fence surrounds a verdant berm on an otherwise empty plot of land. It is guarded by a camouflaged lookout with an assault rifle. Underneath this unassuming hill is a 15-storey inverted luxury tower block called the Survival Condo – and it could be a portend of future private underground developments in cities the world over.

Stretching 60 metres below the surface, the Kansas silo was one of 72 “hardened” missile structures built during the cold war to protect a ballistic missile with a nuclear payload one hundred times more powerful than the bomb dropped on Nagasaki.

It was bought in 2008 by Larry Hall, an ex-government contractor, property developer and doomsday prepper who, like millions of others, is actively attempting to adapt for what he sees as probable future conditions of wide-scale calamity. Preppers anticipate war, pandemics, climate chaos, nuclear disaster, runaway technology, or just a simple collapse of the supply lines keeping cities functioning. The end result of all these scenarios is the same: bedlam. 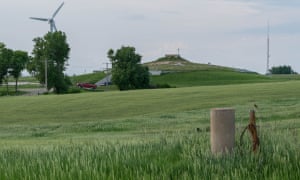 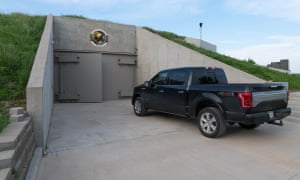 Hall was able to buy the long since decommissioned silo for a fraction of its construction cost. He then spent $20m (£15m) transforming it into a cushy bolthole replete with a library, swimming pool, climbing wall, video arcade, shooting range, bar, cinema, and seven floors of private living space. Half floor units sell for $1.5m, full-floor units for $3m and penthouses for $4.5m, cash only.

Fifty-five ultra-high-net-worth residents have purchased private apartments inside the condo. Residents are understandably cagey about sharing their identities, but include real estate moguls, a financial entrepreneur and two doctors. One resident had the view from her loft in Manhattan filmed in all four seasons, so it could be piped into high-definition screens installed as ‘windows’ inside the bunker. Residents often do not have specific motivations for moving into the bunker, they are acting on a sense of general unease about the future. 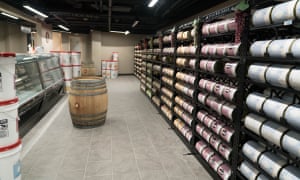 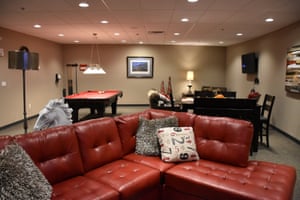 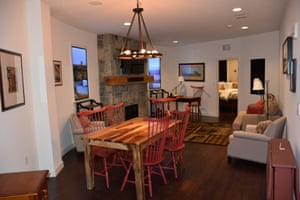 Hall says 75 individuals can survive inside the sealed, self-sufficient converted silo for up to five years during social, political or environmental instability – even total collapse. When the crisis passes, silo residents expect to be able to emerge into the post-apocalyptic world to rebuild.

“[Before] this was not a space of hope,” Hall explains as we tour the facility. “The defensive capability of this structure only existed to the extent that needed to protect a weapon, a missile … We have converted a weapon of mass destruction into the complete opposite.”

The condos are in such high demand that Hall is currently building out a second silo.

From cold war to hot commodity

The idea more of us might move underground once seemed hysterical but, as people continue to flood into fragile cities and the world shudders under our weight, it appears some find it more and more alluring.

A daily drip of terrible news: flooding in Venice; riots in Bogotá, Paris and Hong Kong; nuclear tensions in the Korean Peninsula and Middle East; Sydney and Los Angeles burning; mass shootings – all feed a sense that something terrible is over the horizon that might require just such a bunker.

Although the involvement of private sector investors and developers is new, the construction of underground bunkers by governments is not. Many are hidden in plain sight underneath our biggest cities. 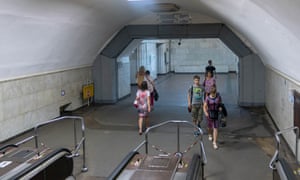 In Kyiv’s Arsenalna metro station, the deepest in the world at 105 metres, a steel shutter in the walls can be lowered to seal the tunnels and platform at the bottom of the escalators, creating a public nuclear shelter. The station was opened in 1960, in the midst of nuclear tensions with the United States. Other cities in the Soviet Union had similar systems. Much of the Moscow Metro is specifically engineered to protect against nuclear attack, where blast doors can seal train tunnels, allowing for a total seal against blast pressure and fallout. In 2015, the Russian authorities revived public civil defence training, effectively reactivating bunkers that had lain dormant since the end of the cold war.

Berlin, being on the fault line between the Soviet bloc and the west, is also riven by extensive bunker systems on both sides of the now-demolished Berlin Wall. Some of these bunkers are air raid-shelters from the second world war and were retrofitted during the cold war for nuclear fallout filtration. Many are now in the care of Berliner Unterwelten, a group of tunnel and bunker devotees who have become the de facto custodians of the city’s subterranean heritage. On a snowy afternoon at Pankstraße station, a tour guide from the group called Kate took us underground and through a sneaky door to reveal bunk beds, kitchens, an infirmary, and a nuclear, biological and chemical air filtration system that could keep 3,339 ordinary citizens alive for 14 days underground.

On the way back to surface level, she expressed frustration that many tourists viewed the bunker as a historical novelty. “Make no mistake,” she says, “the nuclear threat is current, and the fact that we know about this bunker means its usefulness is now limited.” 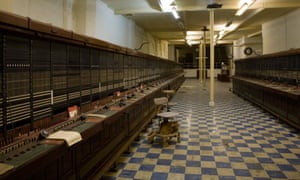 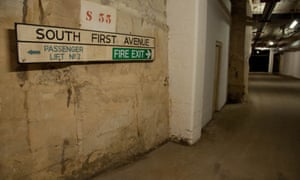 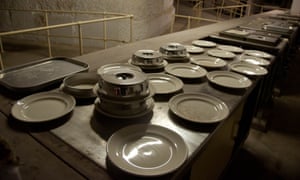 In many parts of the world, governments never stopped building bunkers. Israel recently built a multistorey underground operations centre in Jerusalem and moved all future meetings of its cabinet into the bunker. Meanwhile, the UK government activated a team in a nuclear-proof bunker under a Ministry of Defence building earlier this year in preparation for potential chaos resulting from a no-deal Brexit.

As governments build new bunkers, the abandoned subterranean cities of the cold war have become a hot commodity in the private market. In 2016, the British government listed for sale the Central Government War Headquarters, also known as “Burlington”. This 35-acre underground city just outside Bath was once the fallback headquarters for the government in the event of a nuclear strike on London. The subterranean space could be “buttoned up” to seal off and shelter 4,000 people for at least three months. Almost 60 miles of roads connect an industrial kitchen, sleeping quarters, radio broadcasting facility, laundries, dedicated rail line, drinking water reservoir, library and operation rooms.

One of the prospective buyers looking to snap up the bunker for £3m was Robert Vicino, a doomsday prepper and real estate developer based in California looking to build a survival city. The Ministry of Defence eventually pulled Burlington off the market without explanation – perhaps due to parts of the bunker being listed on the heritage register, which complicates redevelopment.

With Burlington off the table, Vicino set his sights on the 30,000sq ft (2,787sq m) bunker at RAF Chilmark near Salisbury, a 20-room hardened facility split over two floors. Five months earlier, Wiltshire police raided the abandoned bunker following information received that it had been into an enormous underground marijuana farm. Those events may have motivated the Ministry of Defence to find a buyer for the site. Vicino estimates the site could accommodate 154 people. 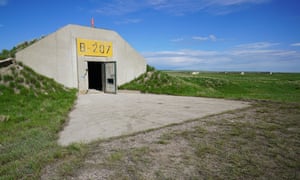 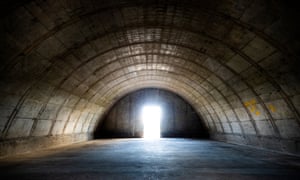 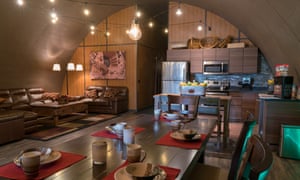 Vicino’s Vivos Group has already built two facilities in the US in the voids left behind by the state. In Indiana, he spruced up a cold war bunker that now accommodates 80 preppers. And in South Dakota, at a site called xPoint, he has sold space in 575 concrete bunkers, part of an abandoned second world war ordnance depot.

A different sort of annexation has taken place in Beijing, where reports emerged in 2015 of a million people living underground in around 5,000km of defunct subterranean tunnels and command bunkers from the cold war. Inhabitants of these tunnels were known as the shuzu, or “rat tribe”. Annette Kim, an urban planner from the University of Southern California, told Al Jazeera that she saw Beijing’s underground bunker cities “not as a relic of the cold war but as a possible precursor for urban living in densely populated Asian cities”.

The future is down

The most concerted move underground is taking place in Singapore, where officials are burying infrastructure, shops, pedestrian walkways, highways, storage facilities, homes and offices as part of a “subterranean masterplan” for the city-state. As an added bonus, spoils from excavation can be used to terraform new land and stave off rising sea levels.

The Nanyang Centre for Underground Space, a research institute within Nanyang Technological University, is directing Singapore’s deep underground development. The director of the centre, Zhiye Zhao, told me his team imagines the future moving in only one direction: down. 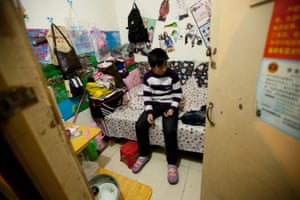 But Zhao did sound a note of caution. The biggest problems his team is tackling are not technical but social, he explains. To put it another way, we still don’t have a clear idea what long-term living underground will do to us.

One the most in-depth studies into the effects of subterranean life on humans was carried out by the Disaster Research Group funded by the National Academy of Sciences. Their findings, published in 1960 as Human Problems in the Utilization of Fallout Shelters, found that extended time underground impacts the body both physically and psychologically. “Many of these stresses have significant effects on behaviour,” the report stated. “These include decreased efficiency in performance, difficulties in concentration, irritability, depression and personality disturbances.”

Who owns the space under cities? The attempt to map the earth beneath us

In other words, people might survive but that does not mean they will thrive. It might only be a matter of time before disquiet starts rippling through any post-apocalyptic underground society.

Hall, though, is convinced that the social aspects of underground life can also be anticipated and prepared for. The key to wellbeing is maintaining expectations of normalcy, he believes, and safety, comfort, sociability and distraction are crucial.

In that way, the Survival Condo’s amenities are not mere luxuries, they are critical to the functioning of its underground community.

“Whether you’re woodworking or just taking the dog for a walk, it’s crucial that people feel they are living a relatively normal life,” he says. “You want good quality food and water and for everyone to feel safe and to feel they’re working together towards a common purpose. This thing’s gotta function like a miniature cruise ship.”

Bradley Garrett’s new book Bunker: Building for the End Times, will be published by Penguin Random House in August 2020

How the 2019 rail fare increases will impact your wallet