Royal Caribbean’s newest ship, Odyssey of the Seas, is set to feature the most action-packed top deck in the company’s fleet as well as a number of ground-breaking firsts designed to create game-changing cruise vacations.

In a just-released statement, Royal Caribbean said the ship, which will be the first Quantum Ultra Class ship to arrive in North America, will offer “dialed-up onboard adventures,” as well as a two-level pool deck and a collection of restaurants designed to please every palate.

Some of the additional notable Odyssey highlights include its ultimate SeaPlex activity space, which is being billed as the most interactive arcade to ever sail. The space will include VR games for individual and group play, augmented reality walls and floors for high-tech competitions and family experiences.

Adding to the mix, Odyssey will debut a reimagined Adventure Ocean where young adventure seekers can choose their own immersive experiences across an entirely new layout, while a new maxed-out teen lounge with gaming consoles, music and movies will provide hangout options indoors and outdoors on an exclusive patio.

Entertainment across the ship will include high-tech signature productions in the Royal Theater and Two70, where art and multimedia are merged for surrounding performances.

The Odyssey of the Seas will also include the North Star glass capsule, which is to be located 300 feet above sea level and will provide 360-degree views.

“Odyssey of the Seas will set an all-new standard created to deliver the most memorable vacations by combining immersive experiences, the best of Royal Caribbean’s trendsetting innovations and the signature ‘Royal Way’ service of our dedicated crew members,” said Michael Bayley, president, and CEO, Royal Caribbean International. “This Quantum Ultra Class ship introduces a new way to see the world as she becomes our first purposefully built vessel for island hopping on both sides of the Atlantic.”

As for Odyssey’s vibrant, two-level pool deck, it will offer a variety of options to sit back and soak up the sun—including two open-air, resort-style pools and four whirlpools, surrounded by casitas and hammocks. 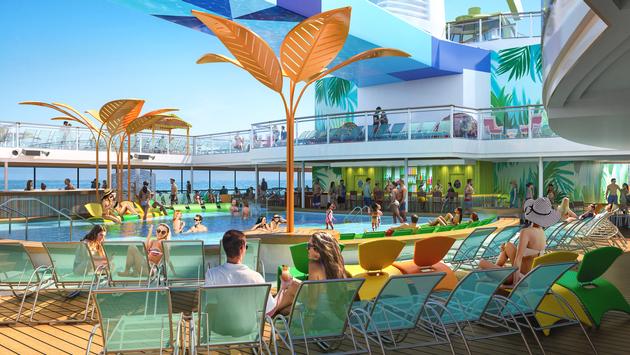 The youngest globe-trotters meanwhile may want to head to Splashaway Bay, an aqua park that includes colorful waterslides, fountains, water cannons and more.

For adult travelers, there’s the Solarium, an exclusive space on the top deck, that allows for “me time,” including swimming pools and whirlpools, a full-service bar, daybeds and hidden nooks for ultimate relaxation.

The ship’s inaugural year is slated to kick off next November in the Caribbean taking travelers to destinations like Curacao, Aruba, Grand Cayman and Mexico on eight- and six-night itineraries from Fort Lauderdale, Florida.

Odyssey will then sail to her homeport of Rome in May 2021 and become the first Quantum Ultra Class ship to cruise Europe for the summer.

While in Europe, passengers will be able to explore storied towns in Turkey and Greece, including UNESCO World Heritage Sites like the ruins of Ephesus, the ancient Acropolis of Athens, the classic Cycladic architecture of Mykonos and more.