As authorities begin their investigation into a high-stakes
evacuation of the Viking Sky off the coast of Norway on March 23, one issue
that will not be probed is why Viking Ocean Cruises was sailing there in the
first place.

The 930-passenger ship lost engine power in rough seas along
Norway’s wild west coast in a season that has long been notorious for its bad
weather.

Some 479 passengers were evacuated by helicopter before the
engines could be restarted. 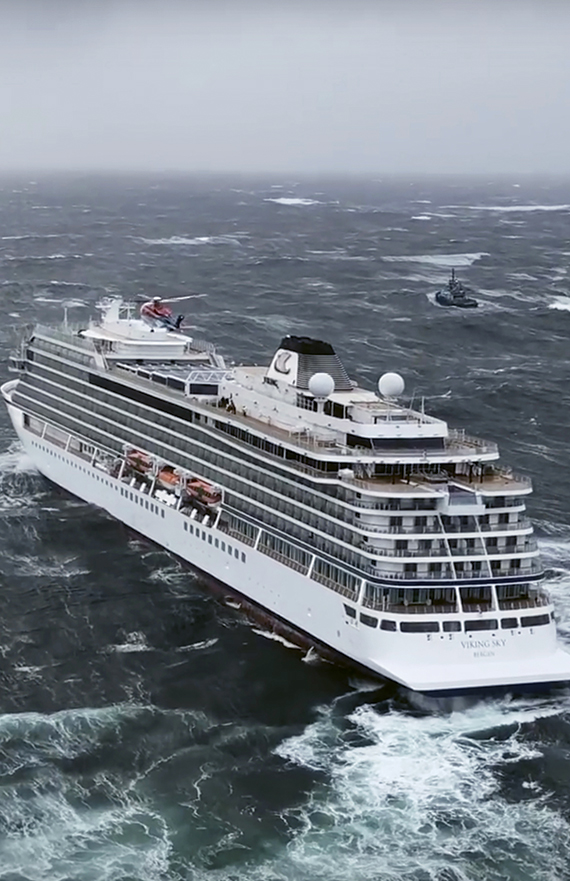 The Viking Sky was in jeopardy in the Hustadvika area, which
is notoriously hazardous for mariners, and it came within about 100 yards of
underwater rock formations that could have pierced its hull.

But Viking, like the rest of the industry, was completely
free to offer the itinerary to its guests.
No agency tells international cruise lines where they can sail or at
what time of the year. While many other aspects of cruising are highly regulated
for safety issues, including ship design and crew training, itineraries are up
to cruise line management.

The Viking Sky was undertaking the fifth and last voyage
this year on a new Viking itinerary titled “In Search of the Northern
Lights.” The trip began in Bergen, Norway, and was scheduled to end 13
days later in London.

Between May and September, the weather along Norway’s west
coast is mild, and skies are clear. In the winter, however, while the warm
North Atlantic Gulf Stream keeps shipping lanes ice-free, the area gets
frequent heavy rains and wind storms.

The big attraction, perhaps the only attraction, is sailing
north of the Arctic Circle for a chance to see the aurora borealis.

“Witness what few others see,” says a Viking
promotion for the itinerary. “Wondrous snow-dusted landscapes, cities
hushed in slumber and the luminous aurora borealis dancing in the sky.”

On March 21, the Viking Sky left Tromsoe in northern Norway,
bound for Stavanger in the south, despite a harsh forecast. Two Norwegian
coastal pilots were onboard to advise the Sky’s Finnish captain.

One of the pilots, Inge Lockert, told the Norwegian
newspaper Vesteralen Online that everything went according to plan until the
engines quit.

“That’s when the problems began,” he said.

Why three of the four engines on the Viking Sky conked out
simultaneously will be a major focus of the investigation, said a spokesman for
the Norwegian Maritime Authority. In a preliminary finding issued last week,
the agency said low oil levels in the engines in combination with ship
movements in heavy seas were a factor in the shutdown. The maker of the
engines, Germany’s MAN Energy Solutions, has dispatched a team to aid in the
investigation.

Norway’s Accident Investigation Board will take part, as
will counterparts from agencies in the U.S. and U.K. About 600 of the passengers
onboard were Americans, with British passengers comprising the second-largest
contingent.

Without power, the Viking Sky didn’t dare lower its
lifeboats, and two rescue vessels sent from Norway were forced to turn back in
waves as high as 26 feet. That left helicopters to pluck passengers, one by
one, more than 100 feet into the air from the deck of the listing ship.

Though Viking did not need approval from Norway for its
itinerary, the seas around the country are somewhat regulated. There are pages
of rules for ship routes and practices, but those are mostly to prevent
hazardous waste spills.

The Norwegian Coastal Administration issues warnings to
mariners about converging wave patterns, including in the Hustadvika area. Last
year, it began offering a digital route service that automatically advises
ships’ captains about favored and disfavored routes.

However, Solveig Moe Froland, director of communications for
the agency, said the system, while active in southeast Norway, is not yet
available in the Hustadvika area.

“We expect this to be in place by the end of 2019,”
he said, adding that “the pilots have good knowledge about the navigation
and routes in the area.”

In the cruise industry, the ultimate responsibility for
itinerary execution and route planning falls to a ship’s captain.

The Sky’s captain, Bengt-Owe Gustafsson, has worked for
Viking since 2017 and before that, for Fred Olsen Cruise Lines. His decision to
sail in rough weather has been defended, though not universally.

Rune Teisrud, a former director of the Norwegian Maritime
Authority, has asserted that big ships such as the Sky should stay farther from
shore when transiting the Hustadvika area in bad weather so they will have
better control and can maneuver more safely if something happens.

The day the Sky ran into trouble, a smaller Hurtigruten ship
had stayed tied up in Trondheim because of the weather, putting passengers on
chartered flights to Bergen instead.

However, cruise lines plan itineraries in areas with known
bad weather patterns all the time, leaving implementation of those itineraries
to the judgment of the captain, with the help of sophisticated weather
forecasting and navigational aids.

Perhaps the clearest example is in the Caribbean, where many
cruises are scheduled during the height of the Atlantic hurricane season, and
captains routinely sail away from or around storms.

The Viking Sky isn’t the first cruise ship to have a close
call in Hustadvika, raising questions about the routing.

In December 2003, the Hurtigruten ship Midnatsol lost power
steaming south on Norway’s west coast. The ship was approaching an underwater
reef, and anchors were set out to stop the drift. Passengers were ordered to
the lifeboats, but the crew managed to restart the engines. In that case,
overheating was found to be the cause of the engine shutdown.

Viking has six more northern lights cruises scheduled for
the winter of 2020 aboard the Viking Star. A spokesman for Viking Ocean Cruses
said last week, “Yes, we will continue to offer our northern lights
itinerary in 2020.”

After the Viking Sky incident, Viking founder and chairman
Torstein Hagen flew to Molde, Norway, where the ship was docked and apologized
to passengers. There were no fatalities, but 20 people were injured.

“Something like this shouldn’t happen,” Hagen
said, talking to Norwegian media network TV2. “But it has.”

Get creative and win with Travelmarvel ·