When she debuts next year, the brand-new, luxury vessel will become the first cruise ship anywhere to incorporate hydrojet technology, which can safely and sustainably bring adventurers even closer to wildlife in some of the world’s most remote and breathtaking destinations.

Initially developed for use in naval warships, the Schottel SPJ 82 Pump Jet is a special-purpose azimuthing thruster system that providing maneuvering and propulsion in all directions, even under extreme operating conditions. With an encapsulated design that’s installed flush will the ship’s hull, the SPJ is able to operate in extremely shallow waters, and its low-noise and low-vibration operations mean that the craft can cruise almost silently in delicate environments without scaring off native sea life.

Compared to traditional propeller-only propulsion systems, hydrojets minimize cavitation and vibration, significantly decreasing the underwater noise to which marine life is so sensitive, and which typically sends them scurrying. Each of World Explorer’s two onboard hydrojets can be shifted 360 degrees in any direction in order to navigate the ship along pristine, otherwise inaccessible, shorelines or dynamically position the vessel without engaging its twin four-blade propellers.

“Our goal is to build one of the cleanest, safest and quietest ships in our category,” said Mário Ferreira, Chairman of Mystic Invest Holding. “We designed our cruise ships to bring our guests closer to and experience more of a destination, while ensuring that we do our part to help sustain these unparalleled places so we can bring future generations to enjoy them too.” 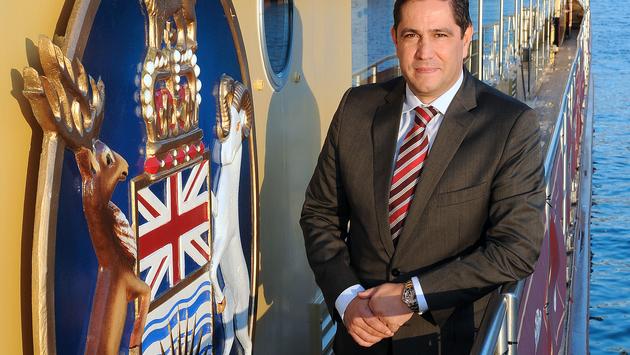 In coming years, World Explorer will be followed by sister-ships World Voyager and World Navigator, whose construction has already been announced. Providing luxury, small-ship expedition experiences, World Explorer will sail with just 200 passengers and 110 crewmembers, offering an incredibly intimate view of some of the world’s most desirable destinations, including Antarctica, the Arctic region, Europe, and the Mediterranean.

She’s equipped with the world’s most advanced state-of-the-art hybrid propulsion system, developed in partnership with Rolls-Royce, which provides maximum fuel efficiency and consumes as little as one-fifth the marine diesel oil of conventional engines—a major investment and testament to Mystic Cruises’ commitment to limiting emissions and preserving the Earth’s fragile ecosystems.

World Explorer and her sister-ships are also being outfitted with onboard gasoline storage and pumping systems to ensure safer fueling operations and containment for its 18 custom-designed Zodiac MilPro Mark V inflatable boats, and allowing them to achieve over three times the average operational range.

Onboard, conservation will also be a priority and single-use plastics, such as straws, cups, stirrers, etc., will not be offered, with still and sparkling water being delivered to staterooms daily in refillable glass bottles. Unreclaimable waste will be stored in a dedicated, refrigerated hold until it can be processed at port by a responsible handler, and Mystic Cruises maintains strict zero-tolerance for anything being thrown overboard by passengers or crew.

How to get cheap flights to Israel or Jordan

Unpacking hacks: What to take out of your bag when you arrive and what to leave in