It was nearing the dinner hour on our Antarctic cruise and our ship, the Le Lyrial, was gliding through a broad, sunlit channel filled with small chunks of ice and snow derived from bigger icebergs.

Then, over the speakers, came the voice of our expedition director. “There are killer whales off the port bow.”

Half dressed, I wrestled on my dinner shirt, not bothering to tuck it in, and headed forward to the bridge, where the captain maintained an open bridge when there wasn’t serious navigating to do.

Killer whales were the one species of wildlife I was really hoping to see, although chances were better for other animals. But there on the bridge, my hopes were realized. There were not one, not several, but at least a dozen orcas swimming close to or on the surface around our ship.

The females, with calves in their shadow, were closest to the ship. Farther off, the 7-ton males with their 6-foot dorsal fins could be seen.

As time passed, it seemed more and more were spotted. I guesstimated about 25, but later the marine mammal specialist on the expedition team said there might have been 100 whales in this “superpod.” 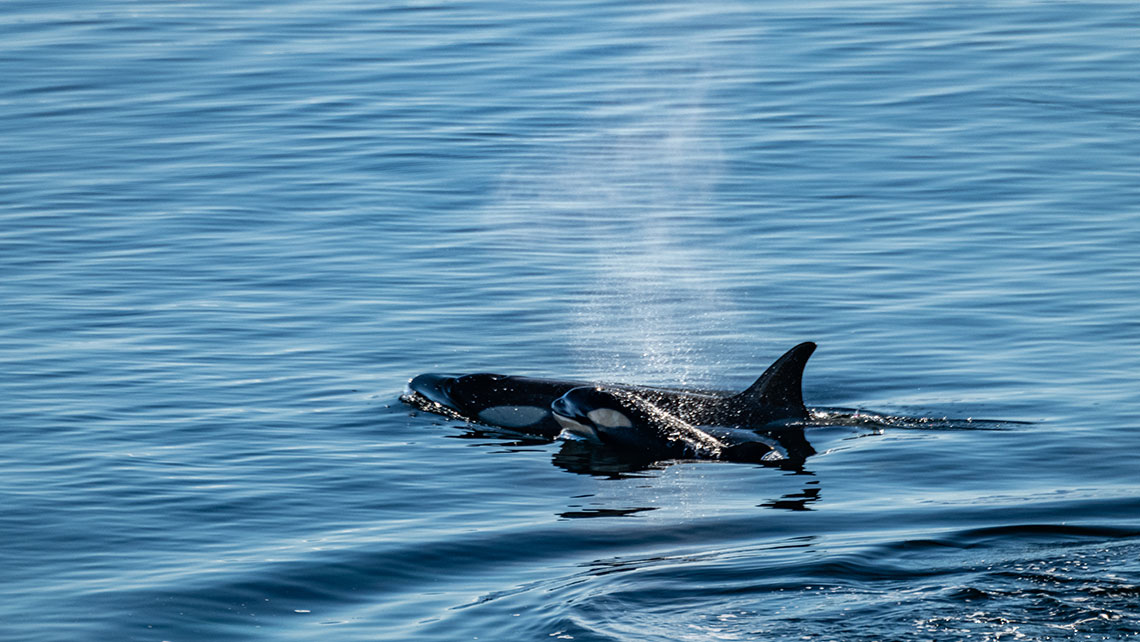 It was the finish to a spectacular day, one that would highlight our 10-day odyssey to and through the White Continent.

Along the way we saw tabular icebergs the size of aircraft carriers, visited roosting penguin colonies as large as 20,000 birds, heard the thunderous sound of a glacier “calving” part of itself into the sea, and learned to distinguish albatrosses from petrels from Arctic terns.

Our guide and host on the trip was Abercrombie & Kent, the luxury tour operator, which had chartered Le Lyrial from its owner, Ponant. Onboard for A&K was an expedition team that included several scientists, a historian, two photography coaches and a seabird expert.

To a person, they were knowledgeable, personable and funny. Over the course of the cruise, I never heard a question posed, either on the ship or in the field, that didn’t receive a thoughtful reply.

Antarctica is the prototype expedition cruise, a segment that is booming. That was evident as we arrived at the dock in Ushuaia, Argentina, to find seven ships waiting to depart, sailing under banners ranging from Quark and Lindblad/National Geographic to Hurtigruten and Poseidon Expeditions.

We would all soon be motoring across the Drake Passage, 500 miles of what can be the roughest ocean anywhere. In our case, seas were 25 feet with winds of up to 50 mph. A scopolamine patch turned out to be a good idea even for someone like me who isn’t prone to seasickness.

Our first day in Antarctica included a visit to an Adelie penguin colony. The skies were overcast, temperature 28 degrees, with a moderate wind. Not bitterly cold but no walk in the park. However, it turned out to be the coldest day. 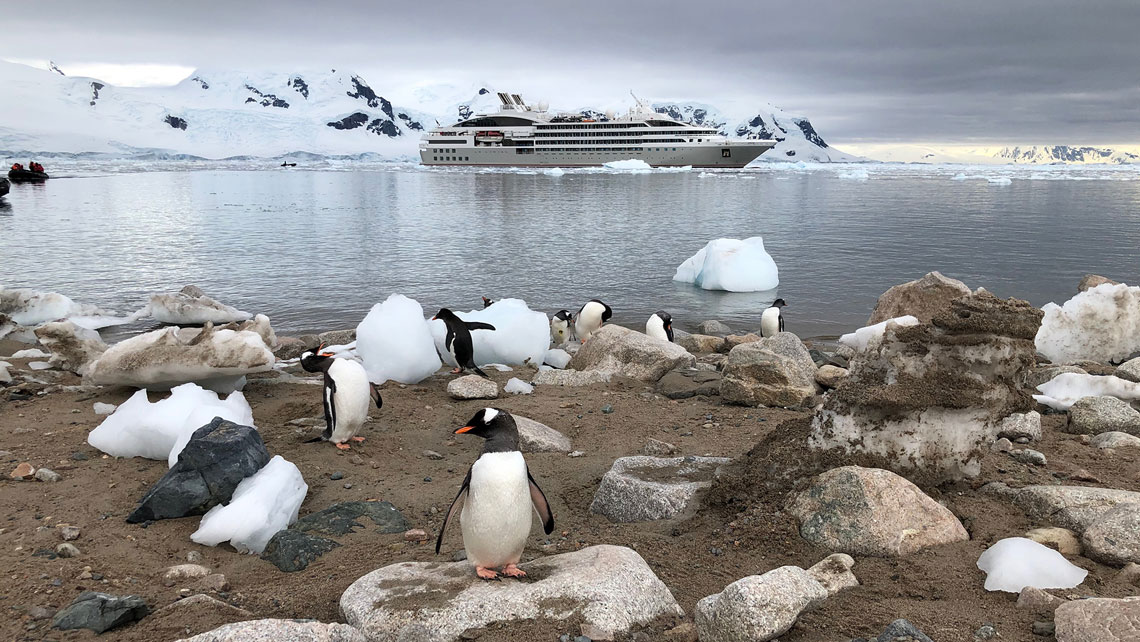 On day three the skies cleared just in time for the Southernmost BBQ, a lunch served on deck in the middle of a bay surrounded by glaciers and snowcapped peaks. We had blankets for our legs but barely needed them. Imagine how glorious it was to have an alfresco meal of grilled duck skewers and good French wine off the coast of the Antarctic peninsula. Vraiment, la vie est belle.

I shared a table with a retired schoolteacher and her husband from Long Island. New York, Chicago, Los Angeles and Florida were well represented on the manifest of 165 passengers. Ages ranged from 20s to 80s, with a sweet spot in the early 60s. There was a British pop singer and his entourage aboard as well as a group of 10 from China and the son of a legendary American business tycoon.

All of us were able to marvel at the luminous aquamarine blue of the glacial ice, delight in the dolphin-like swimming of the penguins and laugh at the sheer indolence of the seals that might spend a week or more lying in the snow before getting hungry enough to hunt again.

The luxury in our luxury expedition was supplied by Ponant, whose crew provided some of the most genuine service I’ve experienced at sea.

One of my favorite moments was out in sea ice in a Zodiac, where we found two wary penguins that kept diving away from us, only to pop up on the next floe, dripping wet and ready for anything. 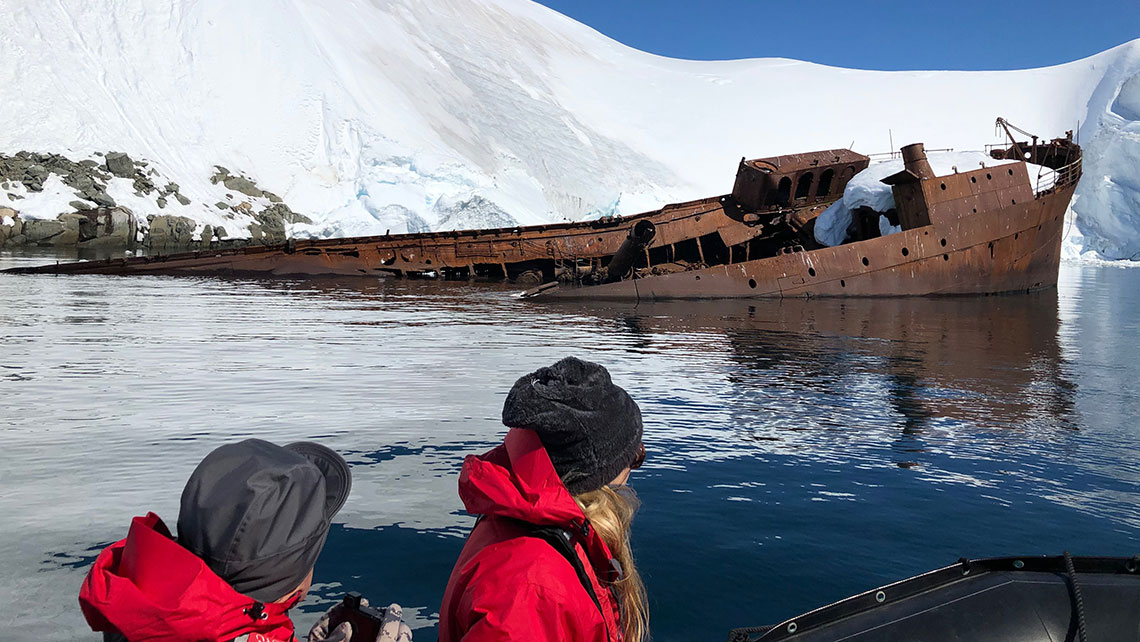 One of the charms of Antarctica is the absence of everything. There’s barely any noise, no commercial activity and no structures, apart from a few shacks left over from the whaling days. It’s as scenic and, outside the confines of your ship, as wild as can be. We saw other cruise ships here and there, but thanks to a preseason bidding system there is no overlap between landing parties.

Going to Antarctica is time consuming and expensive, to say nothing of the Drake Passage and the cold. In canvassing my fellow passengers, there seemed to be two unique appeals that drew them here.

One was to be able to walk in the footsteps of the great Antarctic explorers — Ernest Shackleton, Robert F. Scott and Roald Amundsen — to see firsthand the kind of conditions they faced and sights they saw.

The other was to experience a place that is as close to otherworldly as there is on the planet. The immensity of the forces of nature, the extremes of latitude and climate, the endless light at the southern summer solstice, all combine to make an impression on anyone open to imaginative possibilities.

“It’s ethereal,” said one of my sailing companions. That’s why people go.

Winter escapes: where locals go on holiday in Europe

Discover the Best of the Mediterranean This Year

After 15 years of what can only be described as one of the most successful runs of any company leader in history, Bob Iger stepped down Tuesday as CEO of…

What belongs on a pizza? And seven more all-time epic food wars

People mostly love to use the internet to fight – a lot, about anything. This is particularly evident when it comes to fighting about food, with a seemingly endless flood…

You may have come across a family-run hotel, a small ski resort, an idyllic village, a small museum/gallery or fantastic walks off the beaten track. It may have been an…

Disney Teams Up With Impossible Foods

Walt Disney World and Disneyland have been seriously upping their game when it comes to plant-based offerings at the parks and resorts. Hundreds of new plant-based dishes were unveiled on…
Recent Posts
We and our partners use cookies on this site to improve our service, perform analytics, personalize advertising, measure advertising performance, and remember website preferences.Ok