A day after the Carnival Fantasy arrived at a shipyard in Turkey to be scrapped, Carnival Cruise Line shared memories of the ground-breaking ship from its officers and crew members.

A victim of the COVID-19 pandemic, the Carnival Fantasy was the first of eight Fantasy-class ships designed by the legendary Joe Farcus, who established the neon-heavy, fanciful décor for which Carnival was known back then.

Fantasy, as it was originally known, made its debut in 1990 with some ground-breaking developments, such as the soaring seven-deck-high atrium and a massive navigational bridge. It was 70,367 gross tons in size, a fraction of today’s mega-ships.

Carnival Inspiration, the sixth ship in the Fantasy class that entered service in 1996, also is headed for the scrapyard in Turkey. Carnival Inspiration made its debut on the West Coast in 1996 and for the last nine years has operated a popular short-cruise program from Long Beach.

Here’s a sampling of some recollections of Carnival Fantasy and Carnival Inspiration.

Marc Campagnone, current business development manager, former retail associate on Fantasy: The first time I boarded Fantasy, I had never seen such an impressive atrium – and all the blinking lights along the promenade. I was in awe! I’ll always remember the formal nights in the Cats Lounge, then heading next door in the Electricity Discotheque. Inspiration was equally impressive – loved the seven-day sailings from San Juan and stopping in Barbados. 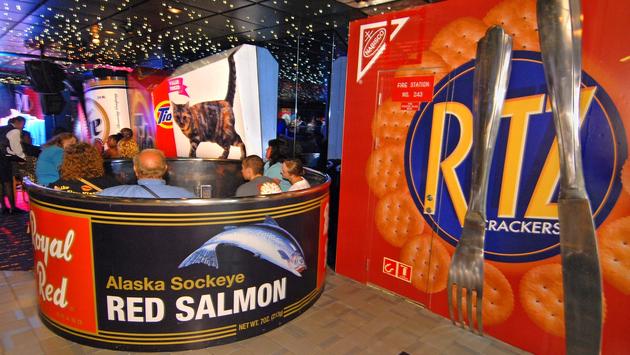 Shahnaz Kashanipour, current guest operations leader, former crew purser on Fantasy: I joined Carnival Fantasy in the shipyard in Finland, and was simply fascinated when I boarded – it was so huge I thought, “Wow, will this thing really float?” When we left the yard, we needed ice breakers to sail and it was a very rough journey to Miami. I remember Captain Gavino telling me that we didn’t have communication with the office for a few days and when we finally connected, they asked “Where are you?” as in those days we only had the radio room. So many memories. She was such a special ship to me and the reason I have stayed with Carnival for more than 30 years.

John Heald, current brand ambassador and former social host on Fantasy: I was in the back seat of Cruise Director Gary Hunter’s Bronco when we passed Bayside and headed over the bridge that leads to PortMiami. I was a 22-year-old social host and already showing signs of becoming a “buffet slayer.” And there she was. Gleaming and huge, her whale tail proudly standing taller than anything on the other ships docked with her. I was privileged to be on her first cruise and later on to become her cruise director. Some of the best times in my life took place on Carnival Fantasy and I made many lifelong friends.

Jo-Anna Manolas Grubjeaic, former dancer, met current Carnival Glory Captain Pero Grubjeaic aboard Fantasy: Pero and I met on the Fantasy in 2001. I was a dancer and Pero was a Third Officer. Only one stripe, he had hair, and we were both skinnier! We married in 2009 and now have two beautiful children together. Our girls love cruising with daddy and can’t wait to cruise again.

Captain Vincenzo Miele, current Imagination captain, past Inspiration captain: Carnival Inspiration is favorite ship that was under my command for the past seven years. Over the years, I’ve developed a strong ti voglio bene (I love you) fondness toward a trusty, well-founded and distinguished lady, our Carnival Inspiration. She was more than just a ship, as she was the foundation of where friends and colleagues became family, where problems turned into solutions, and where performance excelled beyond expectations. She has been my home away from home as I have proudly captained her, and it is with a heavy heart and unparalleled sentiment that I bid her an emotional farewell.

Gaetano Gigliotti, currently vice president-nautical and port operations, former third officer on Fantasy: I was part of Carnival Fantasy’s inaugural team in 1989 as a Third Officer and returned to the ship in 2006 as captain of the first ship back in New Orleans post-Hurricane Katrina. I remember arriving in Helsinki the very day the shipyard declared bankruptcy. It was a national disaster as the yard was the major employer in the country. It was an interesting start-up for me, and it was also the first time I actually walked around buoys and crossed lakes walking the surface (it had nothing to do with superhuman powers but rather the brutal Finnish winter). When we left Finland, everything was frozen – icebreakers had to be used. The crossing was quite rough, and we were delayed two days from our arrival in Miami. During the crossing I learned the might of the Atlantic in winter. Carnival Fantasy 1989-2020. Thank you for the wonderful memories.

Anuj Khosla, current guest operations leader and former cadet purser on Mardi Gras: In 1991, following a hurricane, the Mardi Gras got stuck in Nassau harbor and arrived 10 hours late to port. Since we had extra time in port, we ended up meeting the “star” ship at the time, Carnival Fantasy, as she sailed in. I went onboard for a tour. It was my first contract as cadet purser, and I had never seen anything so beautiful and so BIG. They had to drag me back to the Mardi Gras kicking and screaming when it was time to sail. Thank you, Carnival Fantasy, for all the years of happiness to millions of guests and generating incomes for innumerable crew families across the globe.

Vittorio Marchi, current Carnival captain and former Inspiration and Fantasy captain: It is with sadness that I acknowledge the departure of our two ladies, Carnival Inspiration and Carnival Fantasy. I took part on the final stage of construction of Carnival Inspiration – I literally saw it come to life and become one of the finest Fun Ships. I met Carnival Fantasy at a later time as it was my last Fantasy-class ship command prior to moving to the Conquest class. It was an honor to have been at the helm of our oldest vessel considering that we started working together for Carnival around the same time and we both have lots of stories to share with each other. Farewell, Fantasy and Inspiration – it is like a part of my heart is gone with them.

CATO Engages Resource to take comms to next level ·

Hurricane Dorian cruise update: Extended vacation for some, delayed, canceled trips for others